Welcome to Drafting The Circuits -
Home : Blogs : A Year Without Helio 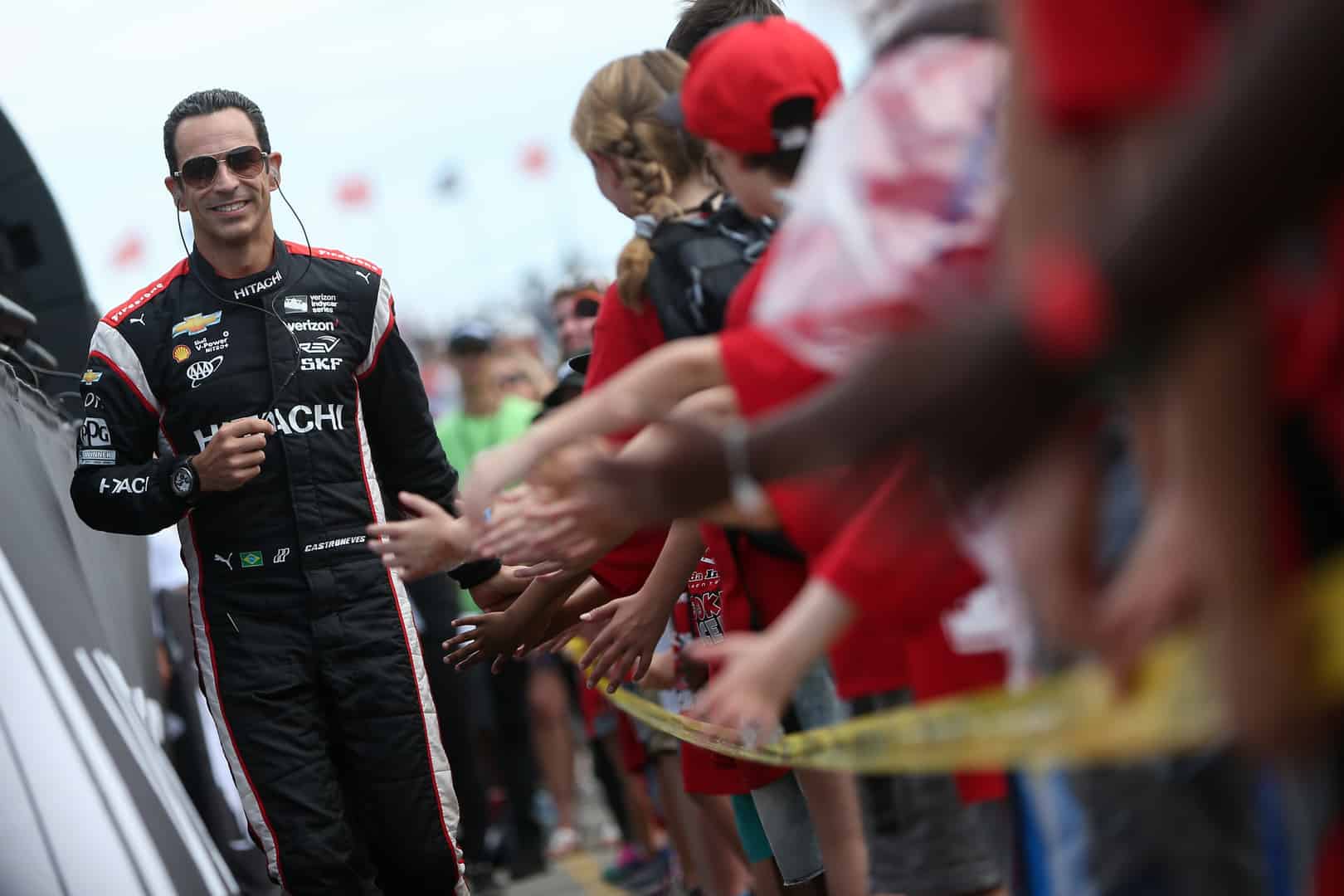 A Year Without Helio

When the Verizon IndyCar Series hits the track at St. Pete in a few weeks, there will be a few things noticeably missing. The airboxes and bumper pods, along with many of the flips, flaps, flicks and other aerodynamic do-dads on the wings will be gone, producing a leaner, meaner Dallara race car.

Half of the Chip Ganassi Racing Team will be missing, although both displaced drivers have found a new home with Trevor Carlin’s fledgling team. Displaced drivers who didn’t land a 2018 ride include J.R. Hildebrand, Conor Daly and Carlos Munoz.

One of the more glaring omissions in 2018 will be the absence of Helio Castroneves in a full-time ride after 18 seasons with Team Penske. The Team expanded to four cars in 2015 to accommodate the signing of Simon Pagenaud. Two seasons later, Juan Pablo Montoya was bumped off the full-time squad in favor of Josef Newgarden. With the Team scaling back to three full-time entries, Castroneves finds himself suffering the same fate as Montoya.

Both Montoya and Castroneves remain employed by Team Penske, driving the Acura in the Weathertech IMSA Championship. Helio will also get a chance to run that new IndyCar chassis at Indianapolis as he attempts, once again, to join the four-time winner’s club.

The IMSA ride is a decent gig, however, Sports Car racing holds this stigma as a retirement home for old racers. In actuality, the field is quite deep and talent-laden. Either way, something is just going to feel not quite right in IndyCar without Castroneves on the track week in and week out.

Let’s take a look back on a career that contains equal amounts of triumph, harmony, disappointment, and controversy.

He was born as Helio Castro Neves in 1975 in Sau Paulo, Brazil. His father, Helio Sr., ran a car dealership and had an interest in racing. He put his son in a go-kart at an early age and the youngster took to it like a duck to water. It was during the karting years that Helio struck up a friendship with fellow competitor, Tony Kanaan. The two would see their careers forever intertwined as they continued to cross paths while moving up the ranks.

Helio moved on from karting after winning a national title in 1989 up the single-seater ranks eventually landing a ride with Paul Stewart’s team in the British Formula 3 Championship. Encouraged by fellow Brazilian, Emerson Fittipaldi, Helio made the move to the States joining the Tasman Racing Team for the Indy Lights Series in 1996.

Racing outside of his native Brazil, he found that track announcers and Media types had this annoying habit of referring to him as Helio Neves. With this being contrary to the Portuguese naming custom that uses both of his parent’s family names, he hyphenated the name to Castro-Neves to provide some clarity. A few years later, he eliminated the hyphen and the space, blending his name to Castroneves, as he is known to this day.

On the Tasman team, Castroneves found himself paired with his old friend and track rival Tony Kanaan. One season later, the two young Brazilians finished 1-2 in the Championship, with Kanaan edging Castroneves for the title by just four points. Both drivers would debut in the CART Series in 1998.

This particular period in time was during the CART/IRL open wheel split. In 1998, CART still had the stronger Series, but the Indianapolis 500 belonged to the IRL. Castroneves landed a ride with the Bettenhausen Team. He managed a podium finish in Milwaukee, but the rest of his season was rather unassuming, finishing 17th in points.

Castroneves moved over to the Carl Hogan Team for 1999, but this did not produce the breakout season that he had hoped. To make matters worse, Hogan announced late in the season that he would be closing down the race team prior to the 2000 season. Castroneves, with no offers on the table, contemplated packing up and heading back home to South America. It would be a tragic series of events that changed the course of Helio’s career.

Roger Penske, after two straight winless seasons, was looking to revamp his team for 2000. He scrapped his own chassis in favor of purchasing customer Reynards, moved from Mercedes power to Honda, switched from Goodyear to Firestone, and looked to hire two new drivers.

The drivers Penske selected seemed to have the perfect balance that he was looking for. 33 year-old Gil de Ferran was a mature, smart and solid driver. He was the type of guy that could get the job done, and consistently bring it home in one piece. Greg Moore was a blindingly quick, 24 year-old, hot shoe out of Canada. He had already piled up five race wins in his rather brief career, and he was pegged to be a superstar in the sport.

Sadly, the world was robbed of seeing that prediction come to fruition when Greg Moore lost his life at the 1999 season-ender at Fontana. A short time later, Helio Castroneves was introduced as a Penske driver.

The myriad of changes at Team Penske had an immediate effect on the team’s fortunes. In just his seventh start with Penske, Castroneves claimed his first series victory at Detroit. Overcome with joy, Castroneves hopped out of the car and ran towards the fence separating the track from the spectators. He leapt on the fence and began to scale it, while fist-pumping and waving to the fans. This unplanned move soon became his signature victory celebration and earned him the nickname “Spider-Man.”

Castroneves would finish his first season in a Penske car with three wins to de Ferran’s two. His more experienced teammate, however, was crowned Champion based on a much more consistent finishing record.

During that season, the team owners were acutely aware of Chip Ganassi’s plan to enter cars in the Indianapolis 500 against the rival Indy Racing League. After Ganassi’s driver, Juan Pablo Montoya, waltzed away with a dominant win, Roger Penske made plans to return to Indianapolis in 2001.

After winning the 500 in 1994, Team Penske failed to qualify for 1995, and hadn’t been back to Indianapolis since, due to the split. After a long day that included two rain delays, it was Helio Castroneves leading de Ferran in a triumphant Penske 1-2. For Castroneves, just nineteen months removed from career uncertainty, it was a watershed moment that validated him as a true star of the sport.

For 2002, Roger Penske moved his team to the IRL full-time. It was a move that pleased his sponsors, but also opened the floodgates for other teams to follow suit, signalling the beginning of the end for the CART Series.

In May, Castroneves notched his second straight Indy 500 win becoming the first back-to-back winner since Al Unser in 1971. His 2002 victory, however, was clouded in bitter debate that still exists to this day. None of the animosity is generally aimed towards Castroneves, but rather toward the IRL officials and Roger Penske. Discussions of the matter generally end in a circular argument with neither side budging an inch.

To make a long story short, a crash late in the going resulted in a yellow flag. At the other end of the track, Paul Tracy passed Helio Castroneves for the lead either after, before, or at the exact moment that the yellow was displayed, depending on which version that you cling to. Castroneves said that he backed off for the yellow, which allowed Tracy to pass, and Tracy stated that the yellow had not yet displayed on his dashboard.

Race control had identified Castroneves as the leader when the yellow was called, and was declared the winner. The win was held up through a series of protests and appeals, with Tracy’s team failing to produce any compelling evidence that was contrary to race control’s version of the events. Castroneves was officially a two-time 500 winner.

A bona-fide star on the track, Castroneves was equally praised for his behavior out of the cockpit, with a gregarious nature, an upbeat outlook, a huge smile, and a larger than life personality. This made him a popular interview subject, appearing on various late-night talk shows and sports-themed programs. In 2007, he vaulted solidly into popular culture when he was announced as a contestant on the highly-rated Dancing With the Stars. He ended up winning the competition, putting his smiling face on prime-time Network television for ten straight weeks.

The attention that came along with his television stardom led to appearances on mainstream talk shows like Oprah, Ellen, and Good Morning America. Over the years he would also appear in other reality-based television programs such as Celebrity Wife Swap, Tru TV’s World’s Dumbest, American Ninja Warriors, and Celebrity Family Feud.

On the track, he continued to find success with Team Penske, posting wins in each season, with a career-high four wins in 2006. It was in 2009 that his career hit a speed bump when the IRS indicted him on charges of tax evasion and conspiracy. A guilty verdict would likely have resulted in jail time, and threatened to put an end to his stellar career.

He was forced to miss the 2009 season-opener at St. Pete while preparing for trial. In the interim, Penske hired Australian driver, Will Power, to fill in. Castroneves’ lawyers argued that the way the finances were handled was not only commonplace among highly-compensated athletes, but also perfectly legal. The jury agreed, and Castroneves was exonerated of the tax evasion charges, and back behind the wheel in time for the Long Beach Grand Prix.

Two months later, on May 22, the prosecutors dropped the remaining conspiracy charge. With that ugly cloud no longer over his head, Castroneves went out and won his third Indianapolis 500, putting him in rare company.

In 2010, Castroneves’s fill-in, Will Power, became his teammate. Power found instant success within the team, piling up wins in a rapid fashion. Castroneves continued to perform at a high level, aiming his sights on a career goal that had eluded him: a season championship. In 2011, he had an uncharacteristic off-season, going winless for the first time since joining Team Penske.

He rebounded in 2012, winning the season opener at St. Pete, becoming the first driver to win in the DW-12 chassis, and handing Chevrolet victory in their first race back after a six year absence. The next few seasons saw a very consistent Castroneves that still fell short of a championship, taking the runner-up spot in 2013 and again in 2014.

With his full-time job now being in IMSA, it appears that his dream of an IndyCar championship will remain unrealized, while the goal of a fourth Indy 500 remains a distinct possibility.  While it will be strange without Helio on the track each race weekend, we can take solace in the fact that Roger Penske has promised a 500 car for Castroneves every May as long as he wants to do it.