Welcome to Drafting The Circuits -
Home : Blogs : The 2019 Clash: Comedy of Errors or Murphy’s Law? 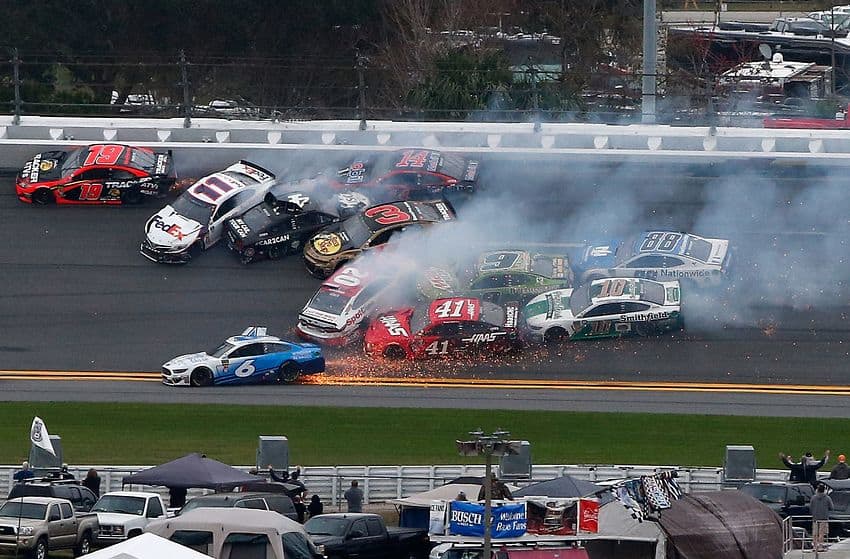 Let’s face it, just about everything that could go wrong in the 2019 Advance Auto Parts Clash went wrong.

A bungled running order, inclement weather, a jet dryer leaking fluid, a race-ending, field consuming crash, and a yellow-line rule debate were the ‘highlights’ of this Monster Energy NASCAR Cup Series Exhibition Race. Ultimately, The Clash, for the first time in its’ history was shortened due to weather.

Before we go any further, yes, there is nothing that NASCAR, or anyone else, can do to control the weather. However, under the first rain delay, as the caution waved, several drivers complained that they had been driving in the rain for several laps.

Kevin Harvick, Denny Hamlin, Alex Bowman, and Jimmie Johnson were all critical of NASCAR. Joey Logano at one point keyed over the radio that it was “raining inside the car.” Between NASCAR’s spotters, the teams’ spotters, and the numerous cameras around the track, there is no excuse for drivers to spend laps ‘racing’ in the rain on an oval.

For a few fleeting moments, I thought that we were about to see a flashback to the 2001 All-Star Race, that famously saw the bulk of the field pull out back-up cars after a first lap crash in the rain. Several years ago, in Xfinity group qualifying at Daytona International Speedway, several failed to make the race after a similar downpour occurred mid-session.

Then we had the bungled running order after pit stops. With today’s systems, it is hard to believe that we can still circulate under caution because the running order is incorrect. In 2016, at Martinsville Speedway, NASCAR spent nearly 20 minutes circulating under caution to fix the running order. As they did that day, race control never opted to throw the red flag and wasted a several laps under yellow.

Granted, compared to the situation at Martinsville, this is an exhibition race with threatening weather in the area. However, it’s a concern to this writer that a similar situation could repeat in a race that could determine the Playoff Grid, or even the Cup Series Championship. Getting the running order wrong twice in four years is unacceptable.

To add to the chaos, under the third caution, a jet dryer began leaking fluid on the frontstretch. It became evident that this was a case of ‘Murphy’s Law,’ anything and everything was going wrong. The clean-up effort took away laps and time that very well could have seen the race go to completion.

With weather looming, the urgency ramped up, just as it would in any other race. Close racing resulted in contact between Paul Menard and Johnson, igniting a multi-car wreck that involved 17 of the 20 cars. Kurt Busch, Joey Logano, and Ryan Blaney were the only drivers that skated through the wreck. Although there were 18 laps remaining in the race, the skies opened up, and on lap 59, the race was called.

Replays showed that Johnson went below the double yellow line to pass Menard. Of course, this was after the contact. Johnson only went below the line due to the contact, and Menard spun into the path of the entire field. While NASCAR made the right call, declaring Johnson the winner, the past inconsistency with the yellow-line rule will undoubtedly spark even more debate on the rule.

Last year, the conclusion of the July Xfinity race brought up that very debate. Justin Haley darted from the outside wall to the inside run in an incredible move to pass both Kyle Larson and Elliott Sadler. However, in doing so, he went below the double-yellow line. The debate that day was whether he had to go below the yellow line to avoid making contact, and ultimately causing a wreck.

Despite everything, there was one bright spot throughout the entire race. A photo of NASCAR CEO Jim France on pit road during the rain delay made the rounds on social media. After years of questions about where Brian France was and how often he was at the track, it was a welcoming sight, and in this writer’s eyes, a promising sign of things to come.