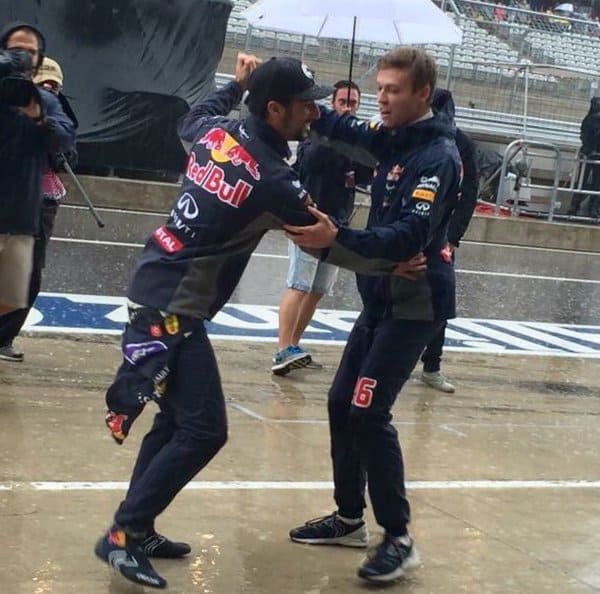 Red Bull Drivers Ricciardo and Kvyat got the party started

Rain and weather continued to dominate the landscape as Formula 1 again experienced a day with limited running. With the National Weather Service issuing flash flood warnings throughout Central Texas, fans were urged to stay away from the track until high noon. The fans that did show up in the afternoon were limited to a few runs from the Mercedes safety cars and whole slew of fun antics from the teams in the paddock.

Rain came in bucket loads as up to 20 inches poured down upon the Texas landscape. At Circuit of the Americas, surprisingly, the FIA went forward with Free Practice 3 limiting the teams to wet tires only as free standing water and small rivers were running across the track.

Lewis Hamilton led FP3, which could deliver him pole position if qualifying does not take place. Hamilton was followed by Sebastian Vettel who led the majority of the session. Nico Hulkenberg, Valtteri Bottas and Carlos Sainz rounded out the top 5. This was another impressive session for Sainz as he has placed in the top 5 in both of the wet sessions of running.

Nico Rosberg placed in 9th position damaging a front wing early in the session while Vettel spun twice, once in turn 19 and again in turn 9. Both of these corners are tricky and especially devious in wet conditions.

Seb found himself turned round in T9

Qualifying was set to occur in the afternoon but the start time was inched back in 30-minute increments as the FIA searched for a window to run the hour-long session. Eventually it was decided to run qualifying the following morning as the weather looks to be much improved on Sunday. Although rain is still forecast for Sunday morning, the weather looks sure to improve by the time the lights go out and the field grids for the 4th US Grand Prix at Circuit of the Americas.

You gotta love the F1 paddock.

Both drivers, crews and media made lemonade out of lemons as the fans were treated to a pair of dancing Red Bull drivers, the Williams crew rowing in the pit lane and even a series of packing crates being run down the streaming rivers. Most of the drivers came out to acknowledge the hardy F1 fans that stuck it out giving meaning to the attention that F1 is getting in Austin.

Red Bull Drivers Ricciardo and Kvyat got the party started

…while the rest of paddock eagerly joined in

Sunday will be a busy day as qualifying and the race will both take place.   This has been done in Japan in 2004 and 2010 as well as in Australia in 2013. Batten down the hatches! We are racing Texas style tomorrow proving that bigger is better in Texas.