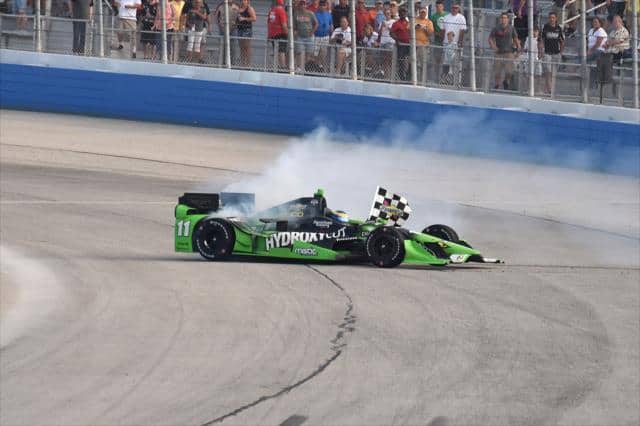 I hate to sound like an overused cliche, but the words “textbook performance” are the perfect ones to describe the display that Sebastien Bourdais put on today en route to victory at the Milwaukee IndyFest for the Verizon IndyCar Series.

The 36 year-old Frenchman led 118 of the 250 laps taking his KVSH Racing-Hydroxycut Chevrolet to the finish line 2.223 seconds ahead of Helio Castroneves. Graham Rahal took the third spot as Juan Pablo Montoya and Josef Newgarden rounded out the top five.

For Bourdais, the win is his second of the season, and the 34th overall in his career, tying him with Al Unser Jr. on the all-time list. His victory today was his first on an oval track since 2006. That win also came at the Milwaukee Mile. He is the fourth driver to collect multiple wins in 2015, joining Josef Newgarden, Scott Dixon and Juan Pablo Montoya

From his 11th place starting position, Bourdais utilized an off-sequence pit strategy to pick up track position while pole-sitter Josef Newgarden led the early stages of the race. From there, Bourdais proved to have the fastest car and was able to move up through the field at will following every pit cycle. At one point, Bourdais had a lap on the entire field, allowing him to take his final pit stop under green and maintain the lead.

“On these ovals, you can go from hero to zero and back to hero again. I guess that’s my story.” said Bourdais. “It’s so much about momentum when you can feel one with the car, and today the guys gave me an awesome car.  Never did I think we could come up through the field and pass everybody. It’s just unbelievable. It’s what these places do to you. When the car is right, it’s so, so special.”

For Helio Castroneves, it was a hard fought and well-deserved second place.  Due to a very un-Penske-like miscommunication, Castroneves’ team brought the car to the qualifying line ten minutes late. By missing the deadline, the popular Brazilian driver was forced to sit out qualifying and start the race dead last.

“That was a hell of a job by the guys.” said Castroneves. “We had a little miscue with qualifying, but we never lost faith. We focused on the race. I’m just so proud and honored to be part of this team.”

Qualifying produced a very different looking grid than we have been used to this season. CFH driver Josef Newgarden took his first career pole while there was a fairly even mix of Chevrolet and Honda cars throughout the field. The Penske team, that has dominated qualifying all season long, ended up with their highest qualified car of Juan Pablo Montoya starting eighth.

Perhaps the unconventional format that featured practice, qualifying and the race on the same day kept the teams from trying any thing too far out of the box for qualifying. Either way, the starting lineup showed considerable parity amongst the teams.

Like Fontana, the Milwaukee IndyFest began with a long green flag run. The first caution didn’t wave until lap 114 when the car of James Jakes lost an engine in turn one. Following the restart, Ryan Briscoe lost control of his car in the bunched field collecting Will Power in the process.

This would be the only contact of the day, and the field was only slowed once more for caution when Justin Wilson, in a fourth Andretti Autosport entry, sputtered to a stop on course.

For Power, the crash had a devastating effect on his bid to repeat as Series Champion. The resulting 22nd place finish dropped Power from second in the standings down to fifth, a full 70 points behind points-leader Montoya with only four races remaining. Scott Dixon moves into the second spot with Graham Rahal third and Castroneves fourth.

The crowd on hand was larger than in recent years, but still smaller than some would have hoped to see. Many praised the efforts of the Andretti Sports Marketing Company as promoter. The lingering question is: Will it be enough to save the event?

With the possible addition of Road America back to the schedule, some feel that we may have seen the final IndyCar race at Milwaukee. While nothing is a done deal yet, this is a developing story that will draw a lot of attention.

The Milwaukee Mile opened in 1876 as a horse racing facility. The historic venue at Wisconsin State Fair Park has been hosting auto racing since 1903 and is now the oldest operating race track in the world.

Open wheel cars have been a part of the history of this place since the beginning. The famed flat oval has hosted every sanctioning body that has controlled IndyCar racing through the years.

During the split, Milwaukee was the only track to host both ChampCar and the IRL in the same season.To see it disappear off of the calendar would be a tremendous loss.

The Verizon IndyCar Series moves next to the shortest oval on the schedule, the Iowa Speedway, for the Iowa Corn 400 on Saturday July 18th.