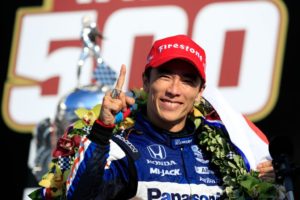 The 44-year-old wrapped up his fourth straight year with RLL Racing, finishing 11th in the NTT IndyCar Series standings this season. Sato scored four wins from 2018-2020, including the 104th Indy 500 which marked RLL Racing’s first 500 win since Buddy Rice in 2004.

Including Sato’s previous tenure in 2012, he scored six additional podiums, three poles and a career-best seventh-place points finish in 2020.

Co-owner Bobby Rahal said it was both a privilege and an honor having Sato twice in his race team.

“We appreciate the commitment and the energy he brought every day to the track and to everything that we were doing as a team,” said Rahal. “Of course, we are forever indebted to him for bringing the PeopleReady car home first in the 2020 Indy 500. It was a special moment for me personally, for Mike (Lanigan) and his family and for our entire team. What a fantastic victory.

“I always really enjoyed working with Takuma,” Rahal continued. “His dedication and commitment to not just his craft, but also the team was unquestionable. We wish him all the best on his next opportunity. I would like to think we will always remain friends because we just enjoyed each other’s company.”

“I have a tremendous amount of respect for Takuma,” said Lanigan. “Not only for his capabilities on the track, but also how he handles himself off the track. I will always be grateful for what he has done for the team and for the success he has brought, particularly winning the 2020 Indianapolis 500.”

Time will ultimately tell where Sato ends up on the 2022 IndyCar grid and who’ll take over the No. 30 Honda. In the meantime, it’s all about gratitude on all parties, including Sato, who shared a tweet to thank RLL Racing.