Welcome to Drafting The Circuits -
Home : Blogs : Rosberg Rolling in Brazil Grabbing His Second Win In A Row 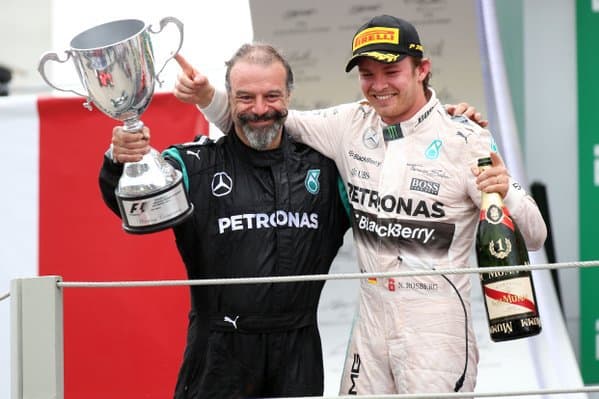 Rosberg double up winning 2 in a row

Rosberg Rolling in Brazil Grabbing His Second Win In A Row

Nico Rosberg won his second race in a row at the Brazilian Grand Prix. The win was the 13th in his Formula 1 career and replicated the win he had last year in Sao Paolo. Rosberg also locked up second position in the Driver’s Championship ahead of Sebastian Vettel. Most importantly for Rosberg, is that he is finishing the season on a high note. Niki Lauda said that at this point of the season, Rosberg is driving better than 3 time championship winner, Lewis Hamilton.

Rosberg double up winning 2 in a row

Rosberg dictated the race at Interlagos, taking pole position and leading the race flag to flag. Lewis Hamilton took second position but was never truly able to challenge Rosberg, who dictated the gap and was in control the entire race.

Hamilton appeared frustrated and mentioned in the post race press conference how difficult it is to follow a lead car at certain racetracks. “Something’s got to change y’know? Because some races you can follow which enables you to have some good racing, obviously places like Austin where there was the last decent race.”

Hamilton and Rosberg at Interlagos

For Hamilton, when he got close to Rosberg, the aero flow changed enough to where he would lose the front end grip and his ability to get close enough to challenge for the front position. Sebastian Vettel seemed to agree with Hamilton stating “I think in general what we need to follow another car closer in medium speed, high speed, slow speed corners is more mechanical grip. So shift the percentage between aero/mechanical more towards more mechanical.” Typical straightforward, smart, and pragmatic approach by Vettel

Sebastian Vettel and Kimi Raikkonen took 3rd and 4th position for Ferrari but were never in the picture to challenge the dominant Mercedes F1 W06 hybrid. The lack of attack at the sharp end of the field created a processional format and did not lead to much excitement in the Brazilian Grand Prix. Ferrari gave an indication in practice that they might have enough pace to make an impact on the Mercedes entries, but once the race was established, it was obvious that the Ferrari’s were just too slow.

Valtteri Bottas took 5th position setting up the most exciting battle for driver’s points in the race finale in 2 weeks in Abu Dhabi. Bottas is currently 1 point ahead of Kimi Raikkonen and will be shooting to stay ahead of his fellow countryman in the finale. Williams has alo sewn up 3rd position for the second year in a row in the Constructors Championship.

Nico Hulkenberg took 6th position for Force India who look to have a firm grasp on 5th position in the Constructors and Red Bull’s Daniil Kvvat brought his RB11 home in 7th. Teammate Daniel Ricciardo came home a disappointing 11th place after taking a 10-position grid penalty for utilizing a newer version Renault engine. Renault and Red Bull were hoping that the new upgraded power unit would bring about some improvement in performance but Ricciardo did not feel that the new version was any improvement. In his words, it is back to the drawing board for Renault.

Felipe Massa brought his Williams home in 8th position but was subsequently disqualified when his right rear tire was found to not comply with the maximum permitted temperature at the start of the race. Massa’s tire was found to be 27 degrees centigrade higher than the permitted temperature of 110 degrees. Ouch for Williams and not a home race to be remembered for Massa. Williams has filed an appeal to the race exclusion.

Massa had a disastrous race at his home race

Romain Grosjean, Max Verstappen and Pastor Maldonado rounded out the top ten in a race that categorized as processional and is exactly what Formula 1 wants to get away from. When top drivers are stating that the formula itself does not permit for close racing and passing at the front, it is time to look at making changes to the formula!

Finally, American Alexander Rossi finished his 5-race stint with Manor racing. Rossi had a great run with the team and will pick up his duties in GP2 with Racing Engineering in Bahrain and then finally in Abu Dhabi. Rossi is in the hunt for a 2016 race seat and would be a welcome addition to the F1 paddock.

One more race to go and we will look toward the 2016 season.