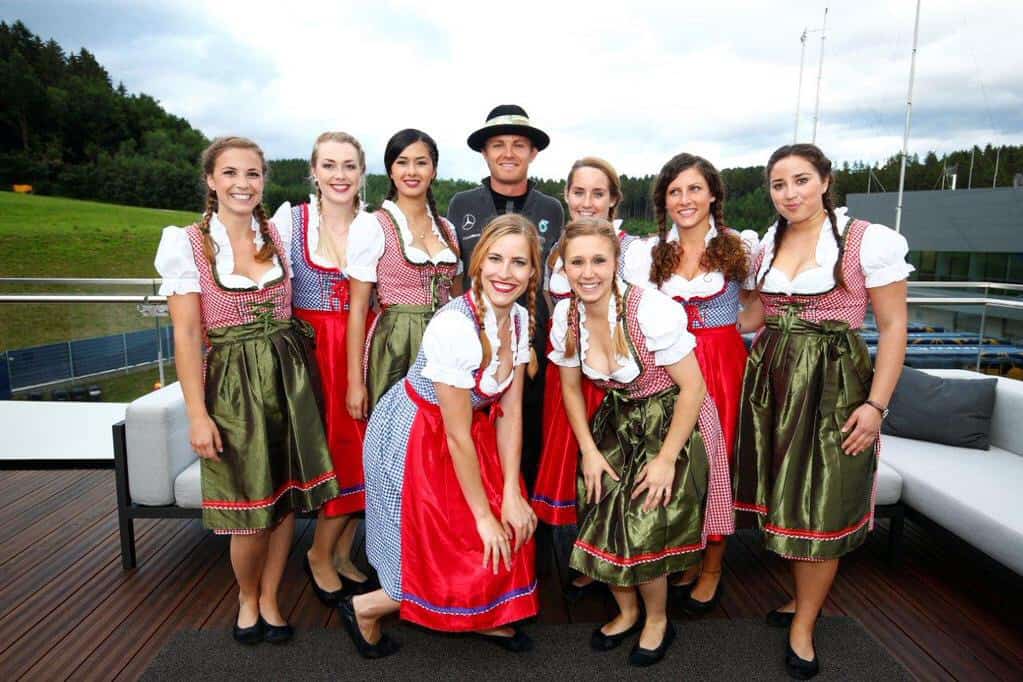 Nico Rosberg thrust his Mercedes firmly back into the chase for the Formula 1 Driver’s Championship. Rosberg went head to head with Lewis Hamilton and took victory with a splendid drive that places him in the same orbit as his championship teammate.

Rosberg started from the second position on the grid and after a great start, put the pressure on Hamilton. Rosberg edged ahead before the first turn and never looked back. Well maybe a little looking back!

As Rosberg continued to inch forward, he extended his lead in the second half of the race. Hamilton never really made inroads into the Rosberg advantage and when he crossed the white line on pit exit he was given a 5 second time added penalty. Essentially this secured the win for Rosberg.

Rosberg is now only 10 points behind Driver Championship front-runner Hamilton. Formula 1 reconvenes at the fabled Silverstone circuit for the British Grand Prix in 2 weeks.

Mercedes power again dominated the weekend with 7 Mercedes powered cars taking positions in the top 10 and points in the Austrian Grand Prix.

With Silverstone also being an engine dominated power track, expect this same cast of characters to run well at the British Grand Prix. Force India will be a squad to watch as they are expected to debut their eagerly anticipated B-spec VJM08.

As Rosberg was getting the better of Hamilton as the lights went off, a Safety Car was deployed on lap 1 after a collision involving Kimi Raikkonen’s Ferrari and the McLaren of Fernando Alonso. Raikkonen, one of the few drivers to start the race on soft tires, experienced wheel spin in the cooler temperatures. He wiggled the car and lost control, veering left and leaving Alonso no place to go. Alonso’s McLaren wound up atop the Ferrari nose in what could have been an extremely dangerous accident for Raikkonen. The sharp corner of the tea tray, or front portion of the floor, ran over the left section of the cockpit, dangerously close to the shoulder, arm and hands of Raikkonen. Fortunately he walked away, unharmed from the accident.

A scary crash for Kimi Raikkonen and Fernando Alonso

From Alonso’s seat, this was his fourth retirement in succession in what has been an absolute disaster for the McLaren Honda partnership. Fernando Alonso has not finished a race since April in Bahrain. As Jenson Button described, it is getting harder to manufacture a positive spin on the McLaren situation. While they recognize that positive progress is being made, racing with 2 world champions who can barely get through 50 percent of the race does not constitute forward progress and motivation. We keep hearing that McLaren is moving forward, but the results are not showing this on the track!

Ferrari also seems to be paddling a bit upstream! After what was a great start to the season, Ferrari have been holding ground rather than edging into the Mercedes lead. Kimi Raikkonen has been struggling with qualifying pace. Sebastian Vettel keeps running into small niggling issues like the faulty wheelnut that kept him from a podium finish in Austria. Ferrari have made incredible progress this season, but at this point they are more in the cross hairs of Williams rather than making progress on Mercedes.

Vettel’s pit stop issue allowed Williams Felipe Massa to get by and secure 3rd position and a podium for the Brazilian. Teammate Valtteri Bottas finished in 5th position as Williams continues to sight Ferrari in the Constructors Championship race. With strong Williams tracks upcoming, we could see Williams battle Ferrari for position if Raikkonen continues to struggle for the Scuderia.

Ferrari are still seeking a second victory in 2015

Nico Hulkenberg continued using the momentum from his race win at LeMans securing a 6th place finish while Lotus’ Pastor Maldonado finished in 7th. Rounding out the top ten in Austria were Max Verstappen, Sergio Perez and RedBull’s Daniel Ricciardo.

Red Bull continues to make more noise in the paddock than it does on the track. Owner, Dietrich Mateschitz, was very outspoken during the Austrian weekend, warning that he is growing tired of the weak performance of the Red Bull F1 effort. Mateschitz lays the blame squarely on engine supplier Renault, expressing that “no driver and no chassis in this world can compensate for this horsepower deficit. How many more things have to happen before we lose all enjoyment?”

Red Bull has a contract with Renault through the 2016 season. Surprisingly, Ferrari was open to providing Red Bull engines if the relationship with Renault continues to sour or Renault decides on a different plan for their Formula 1 effort.

Either way, the Red Bull/Renault saga does not look to be solved this season. Daniel Ricciardo and Daniel Kvyat both sustained 10 place grid penalties for going over the 4-engine allowance. It would appear that these penalties will continue to damage the Red Bull qualifying effort.

Red Bull battling in the mid pack! Who would have thought!

Silverstone is usually a race that Lewis Hamilton runs very well. Last year he was able to slice the lead that Nico Rosberg had built at the legendary British Grand Prix. This year we may just see the opposite if Rosberg can continue to close the gap that Hamilton has built. It should bring considerable fireworks to the US holiday weekend and a lot of positive attention to Formula 1.