Welcome to Drafting The Circuits -
Home : Blogs : IndyCar: Month of May Rewind 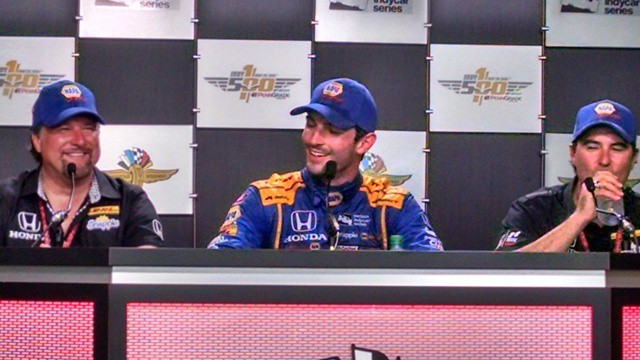 IndyCar: Month of May Rewind

The Month of May over, and the highly anticipated 100th running of the Indianapolis 500 presented by PennGrade Motor Oil is now behind us. It has certainly been an interesting month, with a story book ending for one driver, and some heartache for others.

The Month began with the 3rd annual Angie’s List Grand Prix of Indianapolis, an event that was won by Team Penske’s Simon Pagenaud. In doing so, the Frenchman capped off three consecutive wins. It also meant that Chevrolet had won every 2016 Verizon Indycar Series race leading up to the 500.

The thing that I will remember most about the Grand Prix is how cold it was. Somehow, by mid May, it seemed that Spring had not yet arrived in Indiana. The temp was at 46 degrees, with wind and a heavy cloud cover, ensuring that there would be no sunshine.

I found a spot in the North West grandstand to get a view of turns 1-4, and I watched the race with a jacket on and a blanket over my legs. It felt like we were at a football game. It was, however, an entertaining race but did little to offer a preview of what we might see in the 500 given the fact that the road-course/short oval aero-kit is a decidedly different beast that the Super Speedway configuration.

The topic of domed skids seemed to dominate conversation in the weeks leading up to the 500. These small devices that are mounted on the undertray are designed to keep the cars on the ground in the event of a spin. Some expressed the opinion that the resulting increased ride height would ‘ruin the racing’ in the biggest event of the year.

While the Honda-powered cars had set the fastest times during an open test at the Speedway in April, the complaining seemed to be loudest from the Honda teams. The test ended with a few Honda drivers, most notably Marco Andretti, accusing Chevrolet of sand-bagging.

The Verizon IndyCar Series held their ground, refusing to give in on the domed-skids. All the cars were fitted with the skids when the Speedway opened for 500 practice on May 16th.

When Honda cars topped the time sheets for first practice, led by four Andretti Autosport entries, the Chevrolet sand-bagging claims popped up again. “Wait until tomorrow,” was a common theme, but that tomorrow never came for the Chevrolet cars.

Honda’s speed and handling was real, and a number of Chevrolet drivers confirmed the fact that they had all of their cards on the table. Honda wasn’t dominating by any stretch of the imagination, as several Chevrolet cars posted fast times, notably Will Power being quickest in Friday’s session leading into qualifying. It was apparent that we were going to witness one of the most competitive 500 fields of recent vintage.

The conversations about the domed skids faded into the background. A few crashes during the sessions confirmed the fact they were successful with their intended purpose. When Ganassi rookie driver, Max Chilton, lost the car and smacked the wall, it looked amazingly similar to a crash for Helio Castroneves one year ago. The difference was that while Castroneves took flight, Chilton’s car stayed on the ground.

When qualifying began, we were treated to some compelling drama despite the fact that all 33 cars entered were guaranteed a spot. Several drivers withdrew their times to make a second run with hopes of bumping into the Fast Nine Shootout. Saturday’s session ended with Mikhail Aleshin making a banzai run as time expired. Aleshin was able to grab the seventh spot, bumping rookie driver Alexander Rossi out of the Fast Nine.

The Fast Nine Shootout offered a fairly interesting mix with five Honda cars and four Chevrolets. Four different teams were represented: Schmidt-Peterson, Andretti Autosport, Team Penske, and Ed Carpenter Racing. Noticeably absent was the presence of a Chip Ganassi car. The team, that has four Indy 500 wins to their credit, seemed to struggle to find some real speed.

On Sunday, Canadian fan-favorite James Hinchcliffe stole the show, nipping Josef Newgarden for the pole in the final run of the day. The difference was a scant four hundredths of a second. With Ryan Hunter-Reay claiming the third spot, the front row featured two Honda cars split by a Chevy.

This created a compelling headline leading up to the race, as Hinchcliffe had been seriously injured at Indianapolis in 2015, missing the rest of the season. His triumphant return, combined with the fact that the Schmidt-Peterson team put all three of their cars in the top-ten, provided a feel-good story for the ages.

After a frantic practice session on Monday led by Newgarden, the track fell silent for a few days as the drivers traveled to various locations around the country to participate in Media and charity events.

Miller Lite Carb Day, on Friday, saw a tremendous crowd. An estimated 100,000 showed up for the event on a sunny day with a slight chance of a thunderstorm. The rains stayed away and the party-like atmosphere permeated the air. Tony Kanaan was fastest in the final practice session, perhaps indicating that the Ganassi Team hit on something in their race setup that had eluded them in qualifying.

Dean Stoneman, driving for Andretti Autosport, took victory in a thrilling Freedom 100 for the Indy Lights cars setting up what would turn out to be a highly productive weekend for the team. Stoneman crossed the line side by side with Ed Jones for the closest finish in Speedway history.

Throngs of fans filled the grandstand both inside and outside of the front stretch to watch the Pennzoil Penske crew of Helio Castroneves take a convincing win in the Tag Heuer Pit Stop Competition. Later, classic rock band, Journey, took to the concert stage and rocked into the evening.

Friday night saw various events, both public and private, in the downtown area, including the Maxim Party and the Steak n’ Shake Burger Bash that were held side-by-side at Panasonic Plaza. Drivers, celebrities, and other notable guests were on hand adding to an already busy schedule for the participants.

The Saturday before the 500 is one of my favorite days. Firestone Legend’s Day is an event that features no on-track activity and brings out a smaller crowd than Carb Day. The only media obligation I have on my plate is to cover the driver’s meeting in the morning, which I always enjoy. The drivers always appear very relaxed, and chummy with one another, exchanging stories and smiles, knowing fully that in 24 hours, they will become bitter rivals on the track once again.

The afternoon features an giant autograph session with hundreds of past 500 participants. Now, I am not an autograph collector, nor do I possess the patience to stand in a long line. I do, however, enjoy having candid conversations with retired drivers.

While many of the more recognizable legends, like Emmo, Mears, Mario, or Sneva are whisked away quickly, I can usually find several lesser-known names strolling around Pagoda Plaza in relative anonymity enjoying the day with their friends and family members.

On this occasion, I had the opportunity to exchange pleasantries with Dick Simon, as well as enjoy a lengthy discussion with Bill Alsup about his 1981 season with Team Penske, and his distinction as the first driver to carry an on-board camera for ABC.

On Sunday morning, the Media center opened up at 3am. I arrived at the track around 5, and found that the traffic was still rather light. This, of course, wouldn’t last long with nearly 400,000 expected for race day.

To signify the beginning of the day, the bomb fired promptly at 6am. The gates then opened and a steady stream of fans began entering the grounds. Over the next few hours, that stream turned into a river, and then into a sea of humanity that flooded every walkway in the Speedway.

The buildup to the 500 is incredible, and the pre-race pomp and circumstance are only rivaled by the opening ceremony of the Olympics. In addition to all of the former drivers, professional athletes, pop stars and Hollywood celebrities on hand, hundreds of members of the U.S. Military are in attendance to assist with a fitting observance of Memorial Day.

By now, much has been written about the actual race, so I won’t bore you with a full race report. There are however, a few things that should be pointed out. First off, the racing was tremendous all day long. Certainly I will agree that the finish was a bit anticlimactic, but very satisfying.

Everyone loves a Cinderella story and Andretti Autosport driver, Alexander Rossi, who was effectively unemployed in the off-season, certainly fits that bill. In the early going, a sticking fuel sensor caused Rossi’s fueling stops to be abysmal.

The rookie driver lost numerous positions on stops, and had to run as hard as he could to make up the lost ground. Realizing this, team co-owner Bryan Herta began crafting the strategy that would eventually be rewarded with a win.

Any number of instances, particularly a late caution, might have derailed the plan, but it worked perfectly. Sunday’s win, combined with Dan Wheldon’s upset win in 2011, serves notice that Herta is one of the more daring and brilliant race strategists of this era.

Herta himself also represents a Cinderella story, having come agonizingly close to closing the doors on his race shop and disbanding his team before the merger with Andretti Autosport.

Post race, there were some varied reactions at the top of the order. Rossi looked absolutely in shock, and stunned that he had just won the biggest motor race in the world.

His teammate, Carlos Munoz was equally shocked that he didn’t win. Munoz looked as if he had been put through the ringer, and was left feeling absolutely gutted.

Like many, the thought of Rossi running 36 laps and making it to the checkers seemed impossible. When asked about the strategy, team owner Michael Andretti answered with the simplest explanation necessary.

Indeed, the Indianapolis 500 has a long and storied history of brave and brilliant people who have accomplished the seemingly impossible. With the 100th running in the books, the chapter opens on what the next 100 runnings may hold for the famed Brickyard.