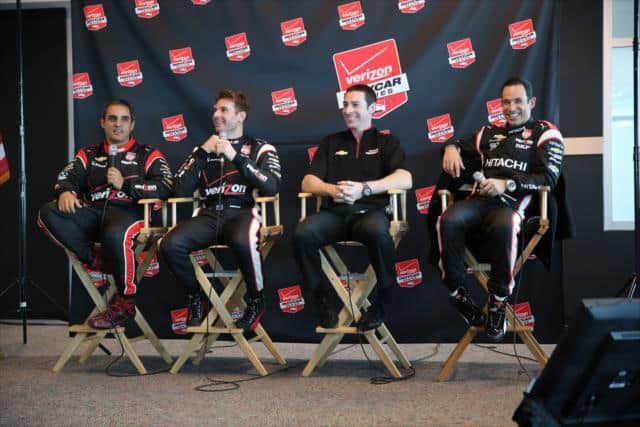 INDIANAPOLIS- The Verizon Indycar Series has just concluded its annual Media Day event. The event, held at the Indianapolis Motor Speedway, provided solid answers to some questions, and left others unanswered.

The most exciting news to come out of the event, as far as I’m concerned, was the announcement that 19-year-old Sage Karam would be behind the wheel of the #8 Ganassi Racing car at the season opener.

The team fell short of confirming him for a full season, but to be on the entry list for St. Petersburg is certainly a good sign.

“Really looking forward to that. Looking forward to getting in the series again,” said Karam, “The whole team is working really hard. We’re still trying to get the deal 100% confirmed for the whole season. To know we’ll be on the grid for the first race is a positive.”

The season opener on March 29th will be the second start in the Series for the native of Nazareth, PA.  In 2014 he piloted a Chip Ganassi car to a ninth-place finish at the Indianapolis 500.

The press conference that undoubtedly created the most buzz came from Chevrolet, who took the opportunity to publicly display their aero kit for the 2015 season.  The road course version of the kit features 123 parts and gives the DW-12 chassis a decidedly different look.

Adjectives used to describe the kit from those assembled ran the gamut from “interesting” and “cool” to “ugly”, “bulky” and “downright hideous.”

We heard some of the same comments when the DW-12 was first unveiled in 2011, and it has turned out to be a successful and durable ugly duckling of a chassis. I’m quite interested to see these in action come March, but I also wonder if many of those extra winglets will end up as debris on the track during close racing.

“Today’s technology is amazing,” said Kent. “You can take a 3-D printer and produce parts like this, that is carbon-filled parts, that are strong enough to actually go on a race car and be tested on speedways and ovals and road courses. It’s an amazing technology that allows us to rapidly learn what our parts do and rapidly allows us to go back and make enhancements as required.”

With Honda yet to display their aero-kit, this is an important step in the journey of these kits that were first discussed back in 2010.

In other news on the day, Andretti Autosport showed up with their three confirmed drivers, with no news on a fourth or fifth entry.

Schmidt-Peterson Racing was pleased to announce that their second seat has been filled. After sitting out 2014, James Jakes will return to the series as a teammate to James Hinchcliffe.

Gabby Chaves was formally introduced to the press as the latest graduate of the Mazda Road to Indy ladder program. Chaves was confirmed last week as the primary driver for Bryan Herta Autosport.

The young Colombian-American spoke highly about the ladder series, and in particular, The Indy Lights series that will get an overhaul in 2015.

“I think it’s the right series.” explained Chaves,  “You’re preparing yourself by racing with the most competitive guys out there at that level. You’re racing at all the tracks you’re going to be racing if you get to IndyCar.”

As I’ve stated in the past, I’m a big supporter of the smaller teams, and in particular, Bryan Herta’s operation. I have high hopes for Chaves this season. While the competition in the IndyCar field is indeed very deep, history has shown us again and again that it is not always the Penske, Ganassi or Andretti drivers that get a chance to shine on race day.

In a Q & A session with Indycar executives, CEO Mark Miles was able to articulate his vision for the schedule going forward, a bone of contention amongst many that follow the Verizon IndyCar Series.

While Miles seems intent on a Labor Day finale, he’d like to get the season off to an early start.

“So, yes, we started by ending earlier. You haven’t yet seen us start earlier. But I want you to understand that’s where we’re going. We want to race in a very full schedule, about 20 races, from the weekend after the Super Bowl in early February through Labor Day. That will feel very different than it did last year and this year. You will see the expansion.”

Exactly where Miles intends to go with expansion is up in the air. He mentioned International races, as well as warm weather climates like Phoenix.

In my mind, at least, it’s still a hard sell. Fans and pundits alike have openly expressed displeasure with the early end, and I didn’t hear any concrete plans for expansion, just possibilities.

The most fun of the day was certainly provided by the foursome of Penske drivers on hand. We have become accustomed to seeing a high level of professionalism out of the Penske organization. However, on this day, Juan Montoya, Helio Castroneves, Will Power, and new teammate Simon Pagenaud seemed content with yucking it up and cracking jokes at one anothers expense.

Power, speaking about his 2014 run to the championship reminisced about his three close calls in prior seasons.

“The previous three times I just kind of had to keep them interested. I thought, I better finish it off this time.” said Power,  “You have to keep people guessing, keep it interesting. You can’t go straight out there and win it.”

“I did that.” shot back Montoya, referring to the 1999 CART championship that he won as a rookie.

“Yeah, and it was boring,” retorted Power, “Nobody liked it, and then you just left the series.”

Montoya, for his part, was very blunt describing his 2014 season.

The newest addition to the team, Simon Pagenaud, seemed to fit right in.

“What do I bring to the team? Fresh blood.” said Pagenaud.

“Are you calling us stale?” said Power

Castroneves chimed in by calling Pagenaud ‘Peppy Le Pew’ and stating that he couldn’t wait to begin playing tricks on his new teammate.

Laughing and joking aside, what Team Penske is bringing to the table in 2015 is a most formidable lineup. The four drivers represent two of the most experienced drivers on the track and two of the hottest road course drivers in the business. Helio Castroneves’ prediction that the team can go 1-2-3-4 is not out of the question.

As the teams begin to understand the ins and outs of the aero-kits, having four drivers to pool information will be an invaluable asset. The Penske drivers will undoubtedly find stiff competition within their own team, as well as their biggest rivals on the track, Target Chip Ganassi and Andretti Autosport.