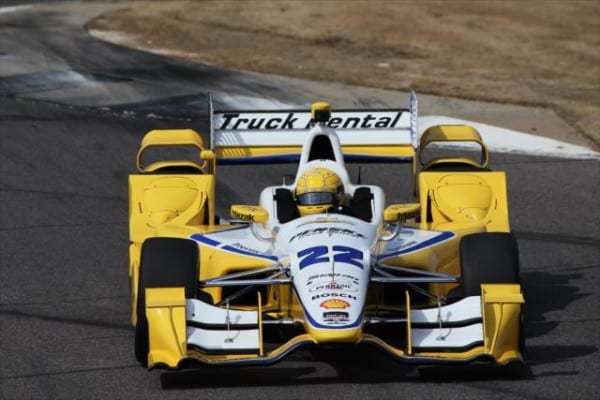 is hard to fathom that the Verizon IndyCar Series’ extra-long off season is finally drawing to a close.  In less than a week, we will be watching the IndyCars in their new aero-kit formations for the first time in competition.

As a writer, I do enjoy writing about the off-season driver shuffle, the sponsor changes and speculation, the testing, doing reviews, previews, interviews and profiles. But nothing compares to writing during the season, however short it may be.

There will be 24 cars on the grid at the season-opener in St. Pete with 21 of those confirmed for a full season. Of those 24, Sage Karam (Ganassi) and Simona de Silvestro (Andretti) are hoping to turn their current one-off deals into a full-season ride. Francesco Dracone has signed with Dale Coyne racing for the first four races of the season.

Before the green flag falls in St. Petersburg, its time to take a look through the field, driver by driver, and assess their chances to take home the 2015 championship.

Will Power: #1 Verizon Team Penske Chevrolet: After three runner up finishes, Australian Will Power was finally able to seal the deal and take home the 2014 season championship. It was a satisfying win for a guy who had come close so many times.

The big difference for Power was tremendous improvement in his oval-track program. Once seen as a road course specialist, Power has grown into a great all-around IndyCar driver. He is with a top team, and early indications are that the Chevrolet power plant and aero-kit are slightly ahead of Honda. In fact, on paper, there is little or nothing working against Power to repeat. That is, except for the tremendous depth of talent in the field including his own three teammates that share the same equipment.

I put the odds of Will Power going back-to-back in the title chase as follows. Will Power 3-1

Scott Dixon: #9 Target Chip Ganassi Chevrolet: The three time champion returns for a 14th season with the Ganassi team. Dixon’s 2014 campaign got off to a slow start when the team transitioned from Honda to Chevrolet power. Now, a full year since the switch, there is no reason to assume that the Target team will not come out of the box as strong as ever. Dixon was impressive during aero-kit testing, and he has shown time and time again that he can never be counted out. As one of the most experienced drivers in the field, Dixon is a threat to win on any weekend, whether it be a big oval like Indianapoils, the rolling hills of Mid-Ohio, or a tight street circuit like Detroit.

The one thing going against Dixon? History and numerology. Dixon has won a championship every five years since joining the league. If you believe in that sort of thing, 2015 is a few years early on Dixon’s schedule. Personally, I give no credence to such coincidences and give Dixon the following odds. Scott Dixon 3-1

Simon Pagenaud: #22 Team Penske Chevrolet: One of the most exciting drivers of recent vintage, I have often wondered how dominant Pagenaud could become with a top tier team. Those questions will be answered as the Frenchman moves to Team Penske from Schmidt-Peterson Motorsports.

Pagenaud has had the championship on his mind since joining the series, and he is indeed a goal-orientated and focused driver. As long as the team doesn’t struggle with the expansion to four cars, Pagenaud could become unstoppable. His oval program needs a little work, but he is farther ahead than Will Power was three years ago. Simon Pagenaud 5-1

Helio Castroneves: #3 Hitachi Team Penske Chevrolet: Entering his 18th season of competition in top-level American open-wheel racing, Helio Castroneves is among the most experienced drivers in the field. Four runner-up finishes in the Championship, including the two most recent seasons, haven’t dampened his enthusiasm.

The three time Indy 500 winner returns again with Penske Racing, his employer since the year 2000. While a fourth Indy 500 win remains an obtainable goal, the Championship seems to have eluded him time and time again. Perhaps 2015 will be the season that the stars align perfectly and he brings home the title. Perhaps his conservative style and consistency will be his ticket to the banquet if some of the more aggressive drivers (namely Power and Pagenaud) decide to test the strength of the areo-kits against the other cars.    Helio Castroneves 7-1

Tony Kanaan: #10 NTT Data Chip Ganassi Chevrolet : Tony Kanaan’s career has been marked with ups and downs. In the early 2000s, he was a consistent front runner with the Andretti team taking the 2004 championship. Following his departure from that team in 2011, he had some lean years with KV racing and went winless for two seasons. It seemed that Kanaan might be on the downside of a fine career until May of 2013 when he captured the biggest prize in Motor Racing, The Indianapolis 500.

Rejuvenated interest in the charismatic Brazilian landed him one of the top seats in the series, the #10 Ganassi car, replacing the retiring Dario Franchitti. His early 2014 campaign started off unassumingly enough, as he adjusted to his new surroundings. By seasons end, he took podium finishes in five of the final seven events, including a big win at the season-ender in Fontana. Look for Kanaan to come out swinging in St. Pete.

One of the oldest drivers in the field, he is quite possibly the most physically fit. Kanaan is probably one of the championship contenders that has been talked about the least through the off-season, but that dark horse status is one of the things that makes him so dangerous come race day. Tony Kanaan: 7-1

Ryan Hunter-Reay: #28 DHL Andretti Autosport Honda: While it looks like Chevrolet has had an advantage lately, Ryan Hunter-Reay was able to take his Honda-powered car to victory lane three times in 2014, including the Indianapolis 500. The American driver has struggled with inconsistent finishes since taking the Series title in 2012. Indeed, inconsistency seems to have plagued the entire Andretti operation the past two seasons.

These struggles aside, Hunter-Reay is still a viable Championship contender. While the Chevrolet aero-kit seemed to best the Honda at Barber, there will be venues on the schedule that favor Honda. Capitalizing on those opportunities will be the key to success. Ryan Hunter-Reay 12-1

Juan Pablo Montoya: #2 Verizon Team Penske Chevrolet: The enigmatic Juan Pablo Montoya has already made his way into the history books as one of a select few drivers to win in IndyCar, Formula One, and NASCAR. He was seen as a road-course specialist in his NASCAR years, but with the long stock car season, he returned to IndyCar with more oval track experience than any driver in the field. That experience propelled him to a win at the 500-miler at Pocono.

Often maligned by stock car fans, open wheel fans love this guy.  With the learning curve complete in his return, look for Montoya to consistently be at or near the top of the running order.  Juan Pablo Montoya 15-1

James Hinchcliffe: #5 Arrow Schmidt-Peterson Honda: I’m really up in the air on how the Mayor of Hinchtown will rebound in 2015. In 2013 he took three race wins for Andretti Autosport and seemed to be on his way as the next big star of the Series. In 2014, however, he couldn’t have been farther off the mark as he ran to a dismal 12th in the final standings. It reminded me of the film where Austin Powers has his mojo stolen.

In 2015 he moves to Schmidt-Peterson Motorsports, and maybe that missing mojo will be found with the team that has done the best job of running toe-to-toe with the top 3 teams. Perhaps Hinchcliffe is the mojo that the team needs to take that one step up the rung and be considered Championship Contender. Time will tell. James Hinchcliffe 25-1

Marco Andretti: #27 Snapple Andretti Autosport Honda: Entering his tenth season with his father’s team, Marco Andretti has rarely displayed that he has what it takes to win a championship. At the same time he has shown flashes of brilliance behind the wheel that cannot be considered flukes.

Inconsistiency, perceived immaturity, and an inability to bounce back from disappointments have been the knock on the third-generation driver. This being said, remember that he entered the series at the young age of 19 years, and perhaps his finest years are ahead of him. I recall a guy named Dario Franchitti winning four championships in his late thirties.

I’ve often thought that Marco may be his own worst enemy, and that if he got a win the the early part of the season, that it may turn everything around.

For 2015, Marco switches to the #27 on his car, the number used by Franchitti in his Andretti years. I can’t help but think that a simple number change might be a good luck charm. Marco Andretti 25-1

Sebastien Bourdais: #11 Mistic/Hydroxycut KVSH Racing Chevrolet: Bourdais completed his long road back to victory circle in 2014, taking a win in Toronto. I would fully expect the four-time champion in the ChampCar series to win again in 2015. As far as the championship is concerned, I feel that it still out of reach for both the driver and the team. Sebastien Bourdais 40-1

Carlos Munoz: #26 Andretti.tv Andretti AutoSport Honda: Munoz is coming off of a successful rookie season that saw him finish eighth in points. Is there a Championship in this young man’s future? I would say yes. Will it happen in 2015? I would say no. Carlos Munoz 50-1

Charlie Kimball: #83 Novo Nordisk Chip Ganassi Chevrolet:  The third man on the totem pole at Ganassi, Kimball has earned his keep. He took a 2013 win at Mid-Ohio, and is looking to rebound from a lack-luster 2014 that left him 14th in points. Look for Kimball to improve dramatically from that result, but the championship will be out of reach given the stiff competition at the top of the field. Charlie Kimball 50-1

Josef Newgarden: #67 Hartman Oil Carpenter Fisher Hartman Chevrolet: Newgarden may indeed be the giant-killer in the field. One or more wins for the young American driver is not out of the question. Championship? I believe that the performance gap between the newly merged Fisher and Carpenter team to the Penskes and Ganassis is still too vast. Josef Newgarden 75-1

Graham Rahal: #15 Mi-Jack / Steak n’ Shake Rahal Letterman Lanigan Honda: While Rahal surprised many by having the fastest Honda in pre-season testing, I believe that the team will still struggle in 2015. I could be wrong, the younger Rahal had some quick glimpses of the front of the field in 2014, but not enough for a Championship run. Graham Rahal 75-1

Takuma Sato: #14 ABC Supply A.J. Foyt Racing Honda: The man is inconsistent, impatient and aggressive. At the same time, his is quick. Blindingly quick at times. A few poles or perhaps a win on the tracks that suit his style are definitely possible. Championship? Not so much. Takuma Sato 100-1

Ed Carpenter/ Luca Filippi: #20 Fuzzy’s Vodka Carpenter Fisher Hartman Chevrolet: The fact that two drivers will share seat time in the same car makes a championship mathematically impossible for either driver, barring any extraordinary circumstances. That being said, never count Ed Carpenter out for the win on an oval track. Carpenter/Filippi: N/A

The remaining full time drivers in the field have odds of 100-1 or greater, but there are a few you may want to keep an eye on.

Stefano Colleti, driving for KV Racing raised some eyebrows by running near the top of the time sheets during testing.

Jack Hawksworth, at the A.J. Foyt team has a wealth of talent and untapped potential.

Gabby Chaves will debut in the Series with Bryan Herta Autosport as the most recent graduate of the ladder series.

Carlos Huertas took a win in 2014, albeit a bit of a fluke, and will be returning with Dale Coyne Racing, as James Jakes returns to the Series with SPM after sitting out 2014.