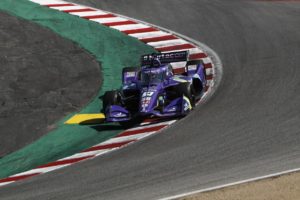 Starting 13th was no problem for Romain Grosjean. He was going to push it to the absolute limit if it meant scoring a podium at WeatherTech Raceway Laguna Seca. Such feat was accomplished in Sunday’s Firestone Grand Prix of Monterey, scoring his third career INDYCAR podium.

Although some of the talk focused on Colton Herta’s dominance and Alex Palou being a step closer of hoisting the Astor Cup. “The Phoenix” rose to the occasion and cut Scott McLaughlin’s Rookie of the Year lead from 38 to 20 points heading into Long Beach.

“I came in not knowing what to expect, if I was going to like or not the championship. I basically fell in love with INDYCAR,” said Grosjean. “Expectation were maybe just go one podium. Alex was with Dale Coyne Racing last year and had two podiums.”

The ROTY battle wasn’t close to being the buzz in the paddock. It was his last stint that made Grosjean shine in Monterey.

The No. 51 Nurtec ODT Honda can go anywhere at the 2.238-mile road course. Notably, on the outside line where he got by Pato O’Ward, Graham Rahal and Jimmie Johnson. All at three different unique corners in a span of eight laps.

Grosjean was on an absolute tear of cutting the race lead on Herta. At one point, Grosjean was setting laps that were two seconds faster than him. But his main target was chasing Palou for second with seven laps to go. That’s when Grosjean caught the lapped car of Johnson at the famous Corkscrew.

On the same corner where fellow ex-F1 driver Alex Zanardi made himself famous in America 25 years ago, Grosjean threaded the needle to pass the 17th place driver. The two tangled, even lifting Grosjean’s Honda but both soldiered on. Showcasing how durable these Dallara chassis are today.

“I’m sorry we made contact with Jimmie. I was definitely going in,” Grosjean on passing Johnson. “I think Jimmie probably didn’t see me. He was pushing hard to protect Alex from me, which is the game. So we made a bit of contact.”

The contact ended Grosjean’s charge on Palou, coming up 1.7340 seconds shy of a career-equal.

“There was a bit of vibration going on after the touch. Again, I’m sorry for that one,” Grosjean explained. “It’s again the blue flag rules that some drivers have been complaining about.

“At one point there were three back markers between me and Alex. They’re not in the race, they shouldn’t be here,” Grosjean continued. “Let’s see what we can do and work on that. That will definitely avoid incidents like today.” 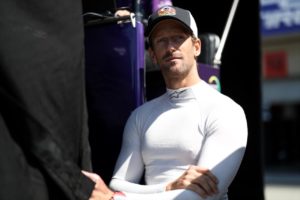 That didn’t didn’t stop Grosjean from loving Laguna Seca. Especially, when the California crowed cheered for his jubilant charge. Perhaps a rare tear or two were shed because how much the fans admire the Geneva, Switzerland racer.

“I had a podium, when I got the ovation – I almost cried, and I don’t cry very often. It’s been more than anything I could imagine.

“They are a very important part of what we do. But what they give me back is just incredible. So I wanted to share with them the podium.”

Grosjean will have one last shot at a win to cap off his brilliant rookie campaign. Live coverage of the Acura Grand Prix of Long Beach begins next Sunday at 3:00 p.m. ET on NBC. Alexander Rossi is the defending race winner.