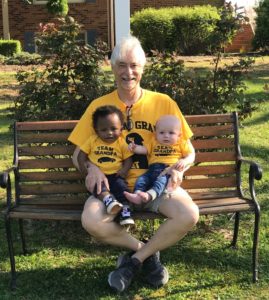 We here at Drafting the Circuits are feeling a tremendous emptiness in the wake of the news that we have lost one of our own.

Gray Warren, who was among the early panelists on the podcast, lost a battle with cancer recently leaving behind many people who loved him and respected him.

The original DTC panel consisted of host Candice Smith, producer Keith Hayes and racing insider Ronnie “Crate” Payne. Gray Warren, after coming on as a guest, was soon added to the lineup, bringing along a wealth of knowledge having worked in NASCAR for most of his life. The lineup was rounded out with Michele Rahal.

In 2013, I humbly accepted an offer from my old friend Candice to join in and provide an IndyCar segment to the show. My role was small at first, but I wanted to contribute as much as I could. As time wore on, Michele moved on from the show, as did Ronnie. Eventually Candace moved on to pursue her budding career as an author.

To this day, I don’t know exactly how it happened, but the duties of hosting of the show fell into my lap. I wasn’t sure I was ready for it. You know who wasn’t worried a bit: Gray Warren, that’s who. 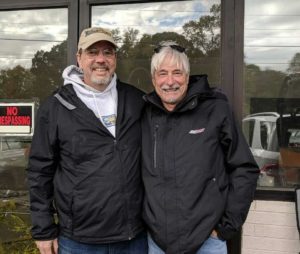 Gray and I would have weekend conversations or text chats all the time to discuss the show. On the air, he was always right there to catch me if I stumbled. Whenever NASCAR came to Martinsville, I’d drive down and he’d drive up, we’d meet at the track and have a fantastic weekend. Gray was with me through it all. When he left the show in 2019 to address his health issues, I fully understood. But damn…I missed him being there with me every time we taped. When I referred to him as “my right-hand” man on the air I wasn’t blowing smoke.

It’s so hard to put exactly into words how I felt about this guy without sounding like a bunch of clichés. I’ll just leave it with this.

Following is the Obituary for Gray, courtesy of Cumby Family Funeral Services.

SOPHIA – Louis Graham “Gray” Warren, Jr, 65, passed away peacefully at his home on October 11, 2021, surrounded by his loving family.

Born October 10, 1956, in Roanoke Rapids, North Carolina, Gray was the son of EllaVee Riggans Warren and the late Louis Graham Warren, Sr.  After moving to Sophia, North Carolina in the early 1980’s Gray worked at NAPA Auto Parts for several years before he was able to pursue his passion for auto racing when he was hired at Bill Davis Racing.  Although he spent time as part of the BDR pit crew, which he thoroughly enjoyed, and then later as a parts manager, his job far exceeded those titles.  He was so proud of that organization and was often asked to give tours to potential sponsors, civic groups, and church groups.  When Bill Davis Racing closed their doors, another door opened for Gray at Richard Childress Racing, and most recently at Childress Vineyards.  In addition to auto racing, Gray loved high school athletics and college baseball.  He absolutely loved Randleman High School athletics, and you could find him every Friday night eating a pre-game meal with the “Randleman Touchdown Club” at P&J’s Diner before helping Tommy McDonald announce the home football games.  He was also part of the Sports Tone Staff, and enjoyed broadcasting Randolph County Sports.  When Gray was not at the race shop or a ballgame, he enjoyed vacationing with his family and friends in North Myrtle Beach and listening to his beloved beach music.

A graveside service to celebrate Gray’s life will be held on Thursday October 14, 2021 at 11:00 at Marlboro Friends Meeting with Pastor Ray Luther officiating.  The family will receive friends immediately following the service in the Family Life Center from 12:00 to 1:30pm.

The family asks that those attending the memorial service and visitation please follow CDC guidelines.

In lieu of flowers, memorials may be made to the American Cancer Society, or the Ronald McDonald House of Winston-Salem, 419 S Hawthorne Road, Winston-Salem, NC 27103.

The family would like to thank the wonderful doctors and nurses at Wesley Long Cancer Center, and Authora Care, for their love and compassion during Gray’s final days.