Welcome to Drafting The Circuits -
Home : Blogs : Formula 1 Opener Creates Thunder Down Under 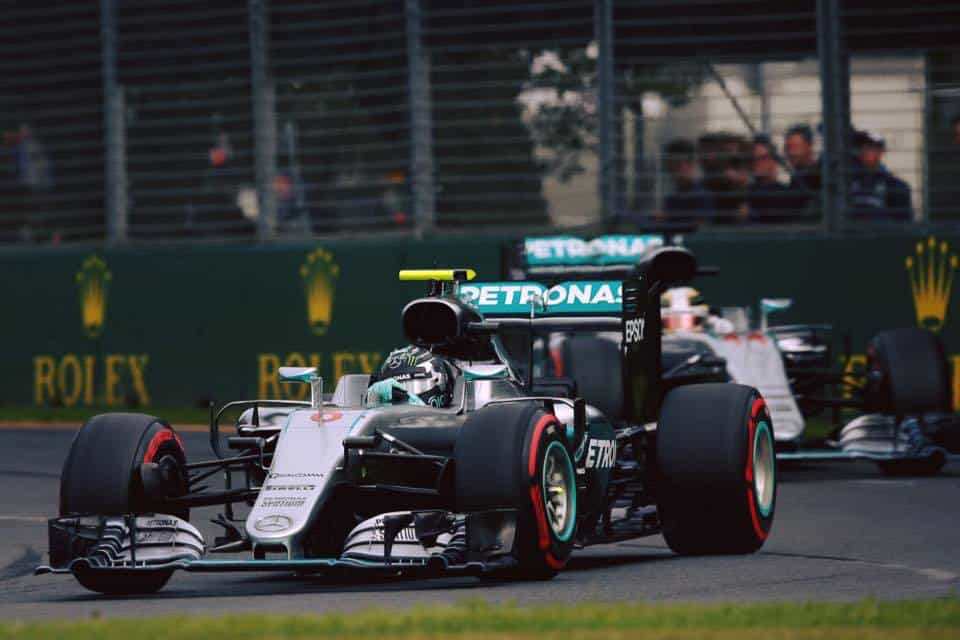 Formula 1 Opener Creates Thunder Down Under

Nico Rosberg took his 4th consecutive victory at the Australian Grand Prix in Melbourne.  Rosberg took the final three victories from last season and continued his wining streak in the season opener.  This was his 15th Formula 1 victory and sets the stage for the mega battle that looks to be looming over the course of the season between Mercedes and Ferrari.

Lewis Hamilton brought his Mercedes home in second position after working his way through the field after a poor start from pole position.  Ferrari’s Sebastian Vettel found the final step of the podium after making a brilliant start to lead the opening segment of the race.

Vettel controlled the race from the front, blasting by Hamilton and using his trademark squeeze play on Nico Rosberg to edge the German into the first turn.  From there it was clear sailing until a red flag, caused by a major crash between Esteban Gutierrez and Fernando Alonso, brought pit strategy into play.

Vettel chose to bolt on another set of Pirelli Supersoft tires while the Mercedes pair elected for Yellow banded Medium tires hoping they would take them to the race end without making an additional pit stop.

The conservative strategy worked for Mercedes and left Ferrari with a “what might have been” feeling by race end.  Vettel’s third position brought the team a podium, but Kimi Raikkonen wound up retiring his Ferrari with an engine failure and fire in the air box after showing promising pace early on.

Although Ferrari showed the ability to take the fight to the championship Mercedes squad, the Silver Arrows still wound up with maximum points while Ferrari wound up with only one car in the points and one car suffering retirement.

Haas F1 Team had a weekend of highs and lows with Romain Grosjean bringing home the VF-16 in a strong 6th position.  Grosjean said the effort “feels like a win” and it certianly gives credibility to the effort Gene Haas and Guenther Steiner have spent crafting the Haas F1 Team.  For the American effort, this was a genuine high point and deserves top billing for the rookie team and all its members.  The last rookie team to to score points in their maiden effort was Toyota back in 2002.

On the other hand, Esteban Gutierrez suffered a major accident after an impact with Fernando Alonso put both into the gravel trap in Turn 3.  Gutierrez commented that it was not the race they were looking for but the important thing was that Fernando was OK.

The crash was enormous with Alonso saying it was the biggest of his career.  The McLaren of Alonso impacted the left rear of the Haas machine sending Gutierrez spinning into the trap and Alonso into the barrier at high speed, through the gravel trap and flipping hard before the destroyed McLaren came to rest against the tire barriers.

Alonso walked away from the accident which again is a tribute to the safety improvements Formula 1 have made through the years.  Loud and clear, the ability of an F1 car to protect the driver is outstanding as showcased from this crash.

There was early discussion about how a head protection system might have worked in a situation such as this from a standpoint of driver extraction.  What should also be noted was the close proximity of the tire whipping across the nose of the McLaren after the two cars collide.  In this case, the Halo design could certainly aid the driver in the case of a failure of the tire tether.

Williams and Toro Rosso both had strong efforts with each team landing both cars in the top 10.  The Toro Rosso bunch made quite the spectacle as Max Verstppen spent a good portion of the race toward to front holding off Lewis Hamilton and then toward the end battling with teammate Carlos Sainz.