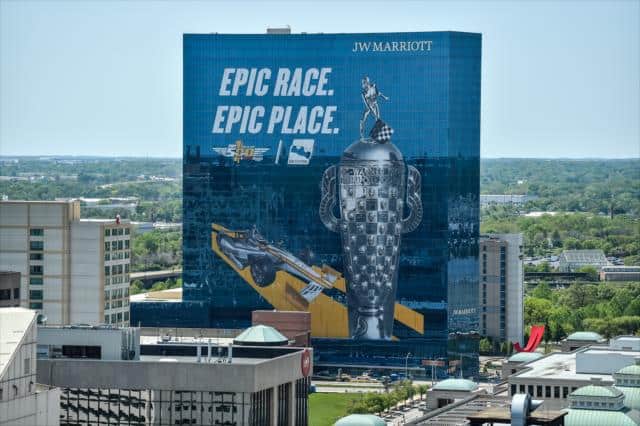 Epic Race, Epic Place. What Might Make an Epic Headline?

When asked about the significance of winning the 100th running of the Indianapolis 500, Verizon Indycar Series driver, James Hinchcliffe offered this perspective:

“I think the driver that wins this one is going to be remembered in the same way that Ray Harroun is known. Not a lot of people remember the 50th or the 93rd or whatever.”

While the reference was a friendly jab at the driver seated next to him, winner of the 93rd, Helio Castroneves, Hinchcliffe makes a good point. With 99 races in the books there are several Indianapolis 500s that are just more memorable than others, for a variety of reasons.

Little Al’s 1992 win, holding off Scott Goodyear for the closest finish in history, and the 1985 ‘spin and win’ from Danny Sullivan immediately come to mind. The highlights from these races have been played over and over again so many times, that they are impossible to forget.

Similarly, the image of Andy Granatelli kissing Mario Andretti in victory lane, and the fourth wins for A.J. Foyt, Al Unser and Rick Mears are all ingrained in our minds. But, how often do you hear the name Kenny Brack pop up in a Indy 500 discussion?

Some of the 500s get lost in the shuffle, and while they are not really forgotten, they just sort of fade into the background. Certainly, many of us would like to forget the fact that Eddie Cheever won the race in 1998, but his role with ABC-TV allows him the opportunity to remind us every single time he is in the broadcast booth.

Some of the moments are lost due to a lack of recency. Ray Harroun is enshrined forever, and some of the other early winners like Ralph DePalma, Louis Meyer, Wilbur Shaw and Mauri Rose are easily remembered.

However, throw out a name like Fred Frame, Lora Corum, Kelly Petillo or Ray Keech to a casual IndyCar fan, and you are likely to get some blank stares.

With that being said, while the100th winner will certainly have a special place in history, a few story lines may be more compelling than others. With three wins, and two second place finishes, in the first five races of the season, Team Penske’s Simon Pagenaud has to be considered the odds-on favorite to win the 500.

Similarly, Pagenaud’s teammate, Juan Pablo Montoya is also considered a favorite. By winning the 100th, Montoya would become the first back-to-back winner since 2001-02. He would also pull off the tremendous feat of three wins in only four starts at the Speedway.

While it would be quite an accomplishment for either driver, I can think of a few others that would really put the spotlight on the 100th running with a win in the 500. Here they are, in descending order…

The 24 year-old driver grew up in Noblesville, Indiana, the son of F1 and CART driver, Derek Daly. Conor’s step-father happens to be J. Douglas Boles, who is currently the president of the Indianapolis Motor Speedway. The young Daly certainly has racing in his blood, and is a home-town hero. His 2015 attempt at Indianapolis ended before the race began, and he would love to erase that memory.

Driving for the Dale Coyne team, a win for Daly would be an upset for the ages, but not entirely unprecedented. In 2011 Dan Wheldon found himself in the right place at the right time and took an unexpected 500 win. When it comes to doing more with less, and capitalizing on strategy, the Dale Coyne team wrote the book.

After a number of lean years, Graham Rahal came on strong in 2015, and took two wins on the season. His momentum continues in 2016 and his race-craft is at a career high.The entire Rahal/Letterman/Lanigan team has adopted a ‘never say die’ attitude and they have relished their success in the David vs. Goliath scenario. Seeing father and son, Bobby and Graham, share a bottle of milk at the end of the day would be a lasting image for the 100th.

Any discussion involving the Indianapolis 500 will invariably yield a mention of A.J. Foyt. As the first four-time winner of the event, Foyt and the Speedway are forever linked. Despite battling recent health issues, the 81 year-old Foyt is back at the Speedway, and just as tough as ever.

The team, managed by his son, Larry, has three Honda-powered cars entered in the 100th running for Takuma Sato, Jack Hawksworth, and Alex Tagliani.  Of the three, Hawksworth is a long shot, seeing as how, in Foyt’s own words, “The boy sucks on ovals.”

Sato and Tagliani, however, have both shown considerable speed at the Brickyard. Tagliani won the 500 pole in 2011, and Sato came within three corners of winning the race in 2012. If any of the three drivers can pull off a win, and put A.J. in victory lane once again, it would be tremendous.

After leading laps during seven of his ten previous attempts, hard-luck TK finally won the thing in 2013, and the crowd went ballistic.

With the Chip Ganassi team and Chevrolet power, Kanaan most definitely has the car to do it, and the fans would approve.

After Mario Andretti won the 1969 Indianapolis 500, the relationship between team co-owners Clint Brawner and Andy Granatelli dissolved. When Andretti sided with Granatelli, a popular urban legend suggests that Brawner’s wife, who was interested in mysticism, put a hex on Andretti causing him to never win the 500 again.

While the so-called ‘Andretti Curse’ is realistically no more than superstitious folly, the fact remains that a driver named Andretti has not won the 500 since.

Despite the fact that his career results are a little light in the win column, third-generation Marco Andretti always performs well at the Speedway. He has seven top-ten finishes, with four in the top three. Just yesterday, Andretti threw down the early gauntlet, setting the fastest time in opening practice.

To see the curse broken, with three generations of Andretti’s standing in victory lane, would be absolutely epic.

It goes without saying that the if the100th running were to produce another four-time winner, it would be a remarkable story. There is only one driver entered in the field with that possibility on the table; Helio Castroneves.

The popular Brazilian driver won his third 500 in 2009, and has been looking for the fourth ever since. For a short time, it looked as if Dario Franchitti might beat him to the accomplishment. Franchitti’s racing career, however, was cut short when he retired following injuries sustained in a crash at Houston in 2013.

With Team Penske for the 16th consecutive year at the Speedway, Castroneves will run the bright yellow Pennzoil livery that brought both Johnny Rutherford and Rick Mears to victory at Indianapolis.

The other four-time winners, A.J. Foyt, Al Unser, and Rick Mears will all be in attendance. To see them welcome a new member to the four-timers club could, perhaps, be the most epic headline imaginable for the 100th running of the Greatest Spectacle in Racing.

The 100th Running of the Indianapolis 500 presented by PennGrade Motor Oil is scheduled to take place on May 29, 2016 with television coverage provided by ABC-TV.