A New Twist for Long Beach

LONG BEACH, CA. September 21,2021: This coming weekend the Grand Prix of Long Beach returns for the NTT IndyCar Series after being scrubbed from the 2020 schedule in the wake of the Coronavirus. For fans and drivers alike, the wait to return to one of IndyCar’s bona fide crown jewel events has been excruciating.

With a history that traces back to a Formula 5000 race in 1975, the Grand Prix of Long Beach has been a constant on the racing calendar as the headliner has changed from Formula One to CART to Champ Car to the IndyCar Series. Long Beach is, in fact, the longest running major street race in North America. Factor in numerous support events that have included various types of sports cars, ladder series, celebrity races, drifting, super trucks and Formula E and you could say that Long Beach has seen it all.

Some of the highlights from Long Beach over the years include the following:

Mario Andretti became the first (and only) American driver to win a Formula One race on American soil back in 1977. News of this win attracted mainstream news coverage from coast-to-coast and cemented Long Beach as a viable event.

John Watson defied all odds and took his McLaren through the field from the 22nd starting spot to take the win in 1983.

In 1989, Mario Andretti was leading in the late stages when Al Unser Jr. made an aggressive pass for the lead, snapping off his own front wing, and spinning Mario around. As Unser celebrated in victory circle, an angry Andretti stormed in, mid-interview, to express his displeasure.

In 1995, Al Unser Jr. took his Penske car to victory. It was his sixth race win at Long Beach, solidly giving him the title of ‘King of the Beach’ 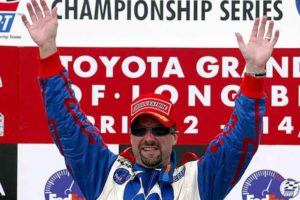 In 2002, Michael Andretti book-ended his CART career with a Long Beach win. The younger Andretti had taken his first series win at the Beach in 1986, so it was fitting that he took his 42nd, and final, win on the same track before he retired from competitive driving.

Long Beach also represented the beginning and the end for the OWRS/ChampCar series. The series that was created when CART went into bankruptcy held its first sanctioned race at Long Beach in 2004, with Paul Tracy taking the win. In 2008, with the merger with IndyCar announced, Will Power won on the street circuit in the final ChampCar event, closing the chapter on the open wheel split.

Ryan Hunter-Reay could only get enough funding for a six race deal with Andretti Autosport in 2010. However a victory in his fourth start with the team, at Long Beach, parlayed that part-time drive into a 12-season long relationship that produced a season championship and an Indianapolis 500 win. In another book-end situation, this weekend’s race will be Hunter-Reay’s final race for Andretti Autosport as he moves to another opportunity.

In 2013, Japan’s Takuma Sato became the first Asian-born driver to win in a top-tier racing series, confidently taking his A.J. Foyt car to a convincing victory.

With all of the interesting tidbits and rich history there is one thing that we have NEVER seen at Long Beach: the crowning of a series Champion. That is set to change this weekend as Long Beach is slated to be the season finale for the IndyCars one-time only before reverting back to its traditional Spring date. Coronavirus concerns prompted the date swap to avoid another cancellation setting up the title fight to be decided at the Beach.

The track itself has undergone a number of changes since its introduction in 1975. The current version measures 1.968 miles around and features twelve turns. The circuit features two long straightaways with the front stretch being a long sweeping run down East Shoreline drive. The back stretch runs down Seaside Way heading into a three turn complex that culminates in a first gear hairpin.

The nature of the circuit provides a number of overtaking opportunities, however, the narrow racing line and concrete barriers require discipline, patience and precision to make a pass stick. In its long history, Long Beach has produced not only some of the finest drives in racing, but also some of the costliest mistakes.

The city of Long Beach is located on the Pacific Coast of Southern California, on the border of Los Angeles County and Orange county. Located within the grounds is the Long Beach Convention Center that holds a number of racing-related displays and a family fun zone for the weekend. The event is held with a street-festival like atmosphere, and you will see a number of Hollywood celebrities, well-known athletes and other notable personalities milling about all weekend. 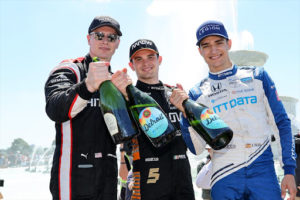 With Long Beach hosting the title fight for the first time, it seems appropriate that the two drivers battling it out are both fighting for their first championship. Two-time champion Josef Newgarden is also mathematically eligible for the title, but it is a long shot, a very long shot.

Chip Ganassi Racing’s Alex Paluo (24) who hails from Sant Antoni de Vilamajor in Spain will square off against Monterrey, Mexico native Pato O’Ward (22) who drives for the Arrow Mclaren SP Team. Both of these young drivers have been exceptional this season beating out the likes of IndyCar stalwarts such as Scott Dixon, Will Power, Simon Pagenaud, Ryan Hunter Reay, and Alexander Rossi for the chance to take the Astor Cup.

Palou comes in with the advantage of the points lead and a relatively easy path to the title while O’Ward needs to have a perfect weekend, and hope that Palou falters at some point. Palou has the disadvantage of never having raced at Long Beach. On the flip-side, never having raced on a particular track did not stop him from winning at Barber and Portland earlier this season.

This “changing of the guard” season has been exciting to watch, and the finale will be as well. Catch the race on NBC-SN this coming Sunday at 3:30 EST to see all the action.