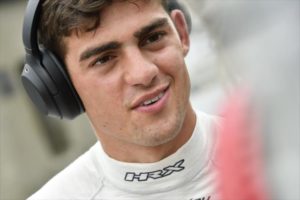 When the 2020 NTT IndyCar Series campaign finally gets going, the battle for Rookie of the Year honors will be among the biggest angles fans will follow.

Among the rookie contenders this year is last season’s Indy Lights runner-up Rinus VeeKay of the Netherlands, who’ll pilot the No. 21 SONAX Chevrolet for Ed Carpenter Racing.

The 19-year-old Road to Indy star rose to the occasion during testing this off-season, which impressed Carpenter as he felt a talented driver like VeeKay would quickly get up to speed and adapt to unfamiliar grounds.

“That’s one of the things that he impressed us with when we first tested him the first couple times, how quickly he was able to adapt not only to the car but a track that he hadn’t been doing in INDYCAR or a track he hadn’t been to at all, was really able to get up to speed quickly,” said Carpenter in Friday’s video conference.

While the season is impacted by the ongoing COVID-19 health crisis, VeeKay commented that ECR is the best team to be a part of under difficult circumstances. More so that the INDYCAR iRacing Challenge has fulfill the racing void for he and other competitors.

“Even in these hard times ECR is the best team for me,” said VeeKay. “Everyone is still working incredibly hard to get the best out of the situation and we’re working together over the phone as a team, even with iRacing.”

VeeKay didn’t partake in the first three races at virtual Watkins Glen International, Barber Motorsports Park and Michigan International Speedway, but once he made his iRacing debut at Twin Ring Motegi, the 23rd place finisher had some learning to do in iRacing as well as navigating to his sim racing location.

“I do have some experience with racing simulators, but not with iRacing, which is quite a bit different,” said VeeKay. “I’m using a very advanced setup owned by Atze Kerkhof, who was kind enough to let me use it, unfortunately it’s a 90 minute drive from my house. Biggest takeaway must be to already work with my strategist and engineers, I kind of know what to expect in real life now.”

The young Dutchman tremendously improved in his latest iRacing outing at Circuit of the Americas, finishing seventh. Even beating his Road to Indy rival and reigning Indy Lights champion Oliver Askew, who had a tough 32-lap Saturday afternoon and finished 28th.

Months removed from making their names in the RTI ladder, VeeKay has tremendous respect for Askew and the system that’s produced rising stars in the NTT IndyCar Series over the past few years.

“I think Oliver and I have made each other better our RTI careers and it’s a rivalry I’ll never forget,” said VeeKay. “The Road To Indy is a one-of-a-kind ladder system that rewards winning championships with scholarships. The whole development from USF2000 cars all the way to Indy cars is great!”

Throughout his racing career, VeeKay’s had the pleasure of having Dutch racing legend Arie Luyendyk on his side, becoming a huge influence to his racing career and when asked about the best advice he gave to him, it’s a simple long-term vision.

“It’s great to have such a legend behind me,” VeeKay on the two-time Indianapolis 500 champion. “His best advice is to always look for winning a championship instead of going crazy for one race.”

Carpenter commented that this season will be extremely hard for not just his young driver, but the other rookies coming into the NTT IndyCar Series. Despite the concern, his excitement level remains very high.

“With all likelihood we’re going to not have testing or highly reduced testing. Some race events can be shortened as far as the amount of practice time, etc,” said Carpenter.

“There’s going to be some challenges without a doubt having a rookie in an abbreviated season like we’re going to be in. I do believe he’ll be up to the challenge and we’ll be able to do some other things as a team to support him, help nurture him through that progress.”

Not just Carpenter has expectations, as does the 2018 Pro Mazda and 2019 F3 Asian Winter Series champion.

“I have pretty high expectations,” VeeKay exclaimed. “The team is great and the No. 21 SONAX Chevrolet felt amazing in pre-season testing. I’m aiming for a win before the season end and I think a Top 5 in the championship would be a perfect result.”

With tremendous support from Carpenter and Luyendyk, sky’s the limit for VeeKay. He also knows that his home country are eager for some real life racing action soon.

“I think everyone agrees that a world without racing isn’t the most enjoyable, but with the current situation it’s the only possibility,” said VeeKay. “The Netherlands are doing pretty good and hopefully the end of COVID-19 is getting closer. But, The Netherlands, and I, can’t wait for my NTT IndyCar Series debut!”