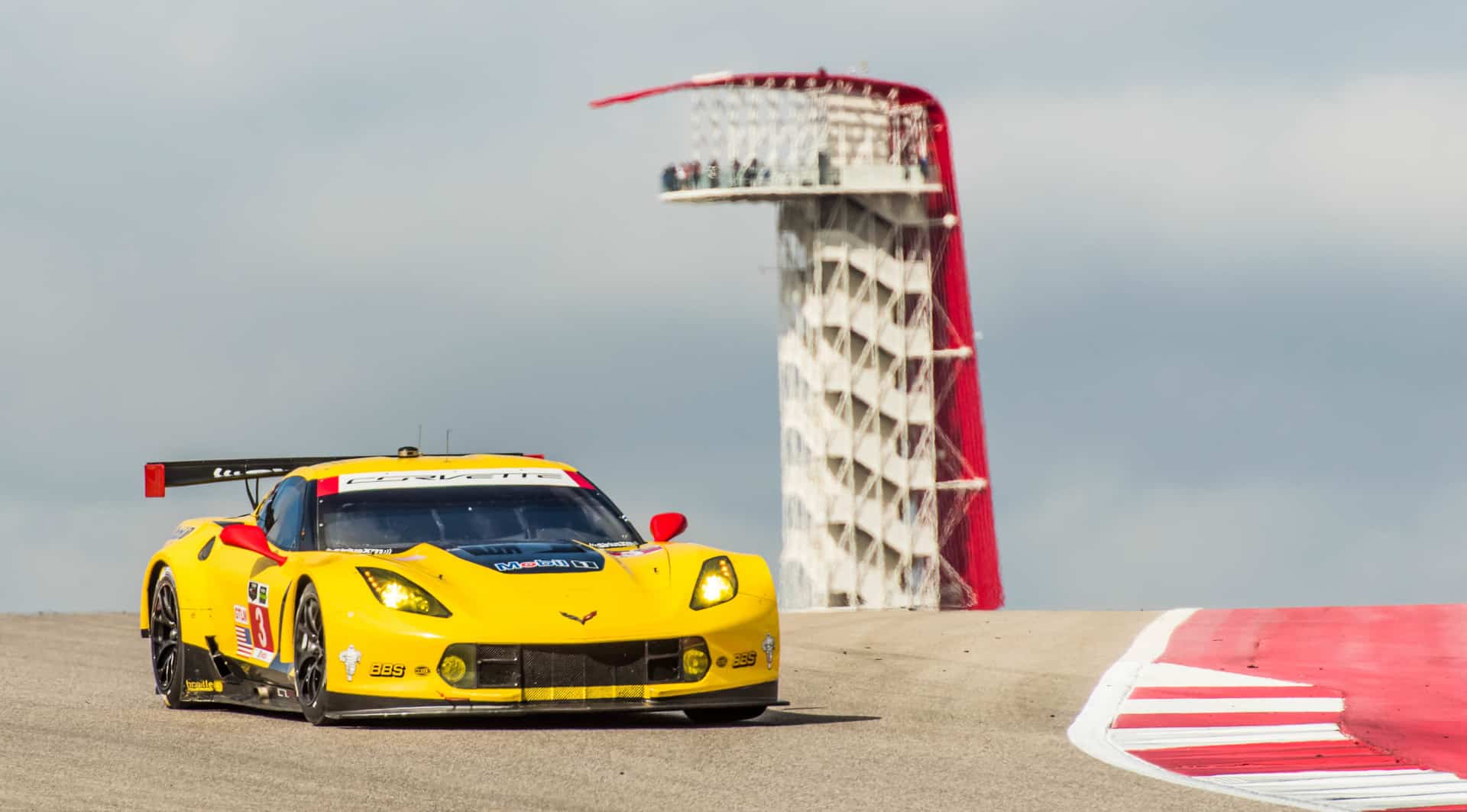 Circuit of the Americas is hosting the penultimate round of the Tudor United Sportscar Championship this weekend in Austin, Texas.  The championship series, which is home to four different classes of sportscar racing, will race at COTA and then finish up with the Petit Le Mans finale at Road Atlanta in Braselton, Georgia.

All of the championship races are very close with no one team a shoe in for the championship.  In the top Prototype class, the #90 VisitFlorida.com Corvette DP holds the top position with only one and two points separating the chasing pair of Action Express Corvette DP’s.  With two races to go, the championship in Prototype will be a three way battle decided at Road Atlanta.  Leader Michael Valiante said.  “It would be nicer if we had a bigger gap to second and third but the way it is now it’ll be a fight until the end.”

In Prototype Challenge (PC), the leaders from CORE autosport, Jon Bennett and Colin Braun, have a gap of 5 points over PR1/Mathiasen Motorsports drivers Mike Gausch and Tom Kimber-Smith.  Bennett and Braun are angling to repeat as PC championship winners and have finished in the top 4 in all 8 races this season.  Gausch and Kimber-Smith have won 3 races this season, winning both of the longer races at Daytona and Sebring, and also at the bull ring of Lime Rock. Again, another tight battle that will play out in the next two races.

Bennett and Braun look to repeat as PC Champions

In GTLM, the 911 Porsche of Patrick Pilet holds a five point lead over the #3 Corvette C7-R of Corvette Racing.  Jan Magnussen and Antonio Garcia had been leading the championship for most of the season, but three consecutive wins for Pilet have vaulted the team into the championship lead with two races to go.  This will be an interesting battle to watch. If Corvette can recapture the form that it possessed earlier in the season and at the longer races,  Road Atlanta may just play into the hands of the Corvette Racing team.  Porsche, Pilet and co-driver Nick Tandy,  however, are looking very tough at the moment and have control of the championship.

Three consecutive wins have boosted Porsche into the championship lead

Finally, and perhaps most interesting, is the battle in GTD between leader Christina Nielsen of TRG-AMR, Aston Martin and the Scuderia Corsa squad of Townsend Bell and Bill Sweedler.  Nielson, along with co-driver Kuno Wittmer have a six point lead over Bell and Sweedler and an 8 point lead over Christopher Haase and Dion von Moltke in the Paul Miller Racing Audi R8 LMS.

Scuderia Corsa look to push forward after the win at VIR

4 tight battles in the Lone Star State at Circuit of the Americas will make for a great weekend of racing and this is just the IMSA portion!

Don’t forget, the WEC is here with night racing at the glorious Circuit Of The Americas!