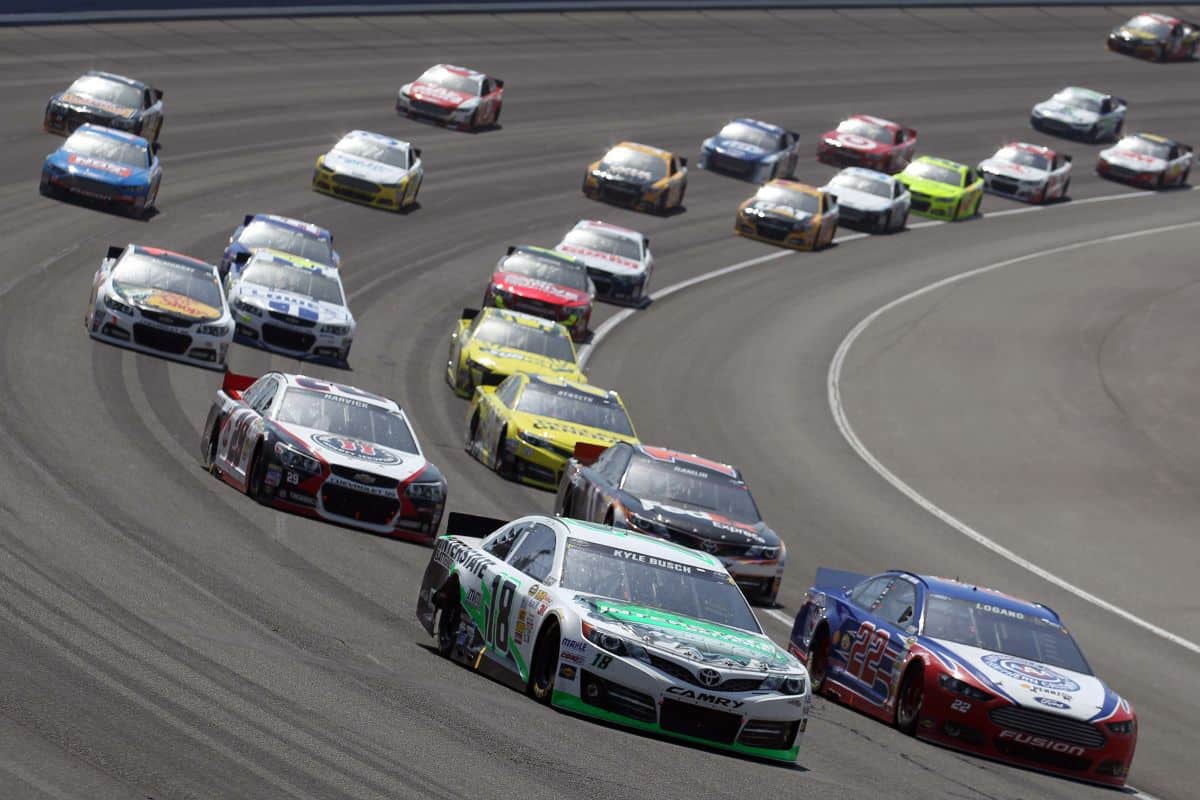 Sunday marks the 57th running of the Daytona 500, The Great American Race.

The event has been called NASCAR’s Super Bowl, the most important race of the season, and the one race that they [Racers] all want to win.

As fans we want to see fabulous contests, exciting finishes, and a fantastic story to take away.

Over the years the Daytona 500 has delivered all of the above and more.

I’m not one for the Scientific Method or staging a perfect random sample to gather information. I merely created a simple “poll” over the Drafting the Circuits social media pages and gathered (loosely) the data.

Below are the Top 10 Greatest Daytona 500 Races according to the Drafting the Circuits fans and me.

10. Jimmie Johnson’s first Daytona 500 win in 2006 – The race went three laps longer than the regulation 200 and ended with a green-white-checker. Johnson roared to victory and captured the Cup, his first, at season’ end.  For Johnson fans everywhere this was the beginning of a long domination in NASCAR and a proud fandom that supports their winning driver.

9. Trevor Bayne’s Daytona 500 win in 2011 – A fresh-faced, God-fearing, respectful young man driving for the legendary Wood Brothers Racing held off the hard-charging veterans of NASCAR’s top series to capture a win, his first ever in Cup, at the Daytona 500. Trevor Bayne became a champion that day and the Wood Brothers organization added another win in a different decade to keep their streak going.

8. Michael Waltrip’s Daytona 500 win in 2001 – He was the driver who NEVER won. Then, Dale Earnhardt gave Mikey Waltrip a huge opportunity in his DEI No. 15 car. Waltrip, with the help of his team owner Earnhardt and teammate Dale Earnhardt Jr., brought the car to Victory Lane. Unfortunately, Earnhardt never made it there to congratulate the driver – the man – who Earnhardt knew was a champion.

7. Dale Earnhardt Jr.’s first Daytona 500 win in 2004 – His father was lost three years before at the very track, but Dale Jr. was coming into his own and leaving the past behind him.  The win was huge for the younger Earnhardt and solidified him as a major player to his competitors and a major star with his own fans.

6. Davey Allison’s first and only Daytona 500 win in 1992 – Not since Lee and Richard Petty had a father and son each won a Daytona 500. Davey was a talented driver with a very promising career. He was the next generation of the Alabama Gang whose light got snuffed out in 1993. This victory alone was enough to put Davey Allison in the annals of NASCAR history.

4. Bobby Allison’s third Daytona 500 win in 1988 – There’s probably nothing more compelling than seeing a father and son compete against one another in arguably one of the biggest events in the world.  Davey Allison tried everything he could to best his father, but Bobby Allison took the checkered flag becoming the oldest driver to win The Great American race at age 50.

3. Dale Earnhardt Jr.’s second Daytona 500 win in 2014 – It had been a decade since he’d won his first time at The Great American Race and a lot of water had gone under the bridge. Earnhardt Jr. had a lot of positive momentum coming into the 2014 season and capitalized on that with a huge win to start it. The total and complete happiness Earnhardt Jr. must have felt was evident all over his face. When he hugged every single crew member all knew the character of the man who won his second Daytona 500, a feat even his father could never claim.

2. Richard Petty’s sixth Daytona 500 win in 1979 – The fight heard/seen around the world that brought NASCAR fans to the television was only a part of the story. It was more than just fisticuffs between Cale Yarborough and Bobby Allison that brought fans into the sport, it was the nationally televised race that got them and the quality of racing that kept them tuning in week after week.

1. Dale Earnhardt’s first and only Daytona 500 win in 1998 – It took 20 attempts for The Intimidator to win The Great American Race.  The race was largely incident free and run quickly. What was so memorable was post-race after Earnhardt took the checkered flag when every single crew member of every team lined up to offer Earnhardt hearty congratulations and high fives. It was an image burned into the hearts of NASCAR fans making it the Number One Greatest Daytona 500 Race.