Welcome to Drafting The Circuits -
Home : Blogs : The Martinsville Speedway and Me 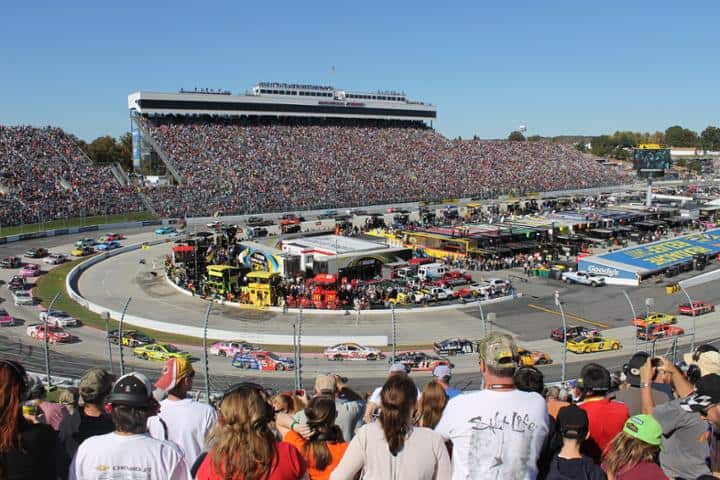 The Martinsville Speedway and Me

There are precious few racetracks in these United States that have a certain mystique about them that is difficult to explain. These race tracks have a quality about them that comes from a rich tradition of racing history, and stories about racing legends who’s accomplishments have left an indelible impression behind, like a spirit inhabiting the grounds.

The Indianapolis Motor Speedway most certainly has this quality, as well as Darlington and Daytona. And, to a somewhat lesser extent, I get this feeling at Watkins Glen, The Milwaukee Mile, and at Bristol. However, there is one small race track nestled in the mountains of South-West Virginia where that feeling is absolutely undeniable for me.

The Martinsville Speedway holds not only an incredible wealth of racing history, but a huge amount of personal memories for me. If you will indulge me for a short time, I’ll share a few with you.

After growing up in the Northeast, a job transfer for my dad found our family moving to Virginia in 1982. I was in high school at the time, and I had a love of racing since early childhood. I had been to Sports Car, Formula One, and IndyCar races over the years. I was certainly aware of NASCAR, but I wasn’t sold on it. The fact that a NASCAR event was held twice a year in close proximity to me didn’t interest me at the time.

It wasn’t until 1990, after I was out of college and working for a living, that I decided to check out NASCAR on a last-minute whim. I was reading the newspaper on a Friday afternoon and saw that the race was that weekend. I figured that it must be sold out, but the paper said that general admission tickets on the backstretch would go on sale on race morning at 8:00 AM.

I had the weekend off, so I called up my good friend, Matt Price, and asked him if he wanted to take a road trip down to Martinsville for the NASCAR race. We packed a couple of coolers and headed out early Sunday morning.

We parked, and went to the ticket booth to inquire about back-stretch tickets. As it turns out, we were on the wrong end of the track to buy those tickets, but they did have some front stretch reserved seats still available. They were down fairly low, but they didn’t cost much more than the backstretch. Rather than walk around the track, we bought those tickets and headed in.

Now, when I say the seats were low, I mean really low. Our seats were actually in Row One, closest to the fence.

By the end of the day, I had learned two valuable lessons.

Lesson One: Short-track stock car racing is a thrilling, enjoyable, viable form of Motorsport, and I should kick myself for ignoring it for eight years.

Matt and I were treated to a 500 lap contest that saw bumping, banging, rubbing and spinning. We saw Hendrick teammates Ricky Rudd and Ken Schrader take each other out of the race battling for the lead. At the end of the day, we saw Geoff Bodine holding off Dale Earnhardt and Mark Martin to score a win in the Junior Johnson car.

Lesson Two: Never sit in the front row at Martinsville. The view actually wasn’t that bad, and sure, it was loud. Very loud. That didn’t bother me, in fact, I like my racing loud. Matt and I had a considerable amount of dust and tire debris stuck to our clothing and skin by the end of the day, but that didn’t bother me either. What did bother me was the practice of fans hurling their garbage onto the walkway in front of the fence.

In subsequent years, track officials and local authorities managed to put an end to this tradition, but it was alive and well in 1990. Imagine trying to enjoy a race with a constant shower of beer cans and fried chicken bones flying over your head, and occasionally being struck with these items.

Despite the chicken bone fiasco, I was solidly sold and I returned to Martinsville (with better seats) religiously, twice a year, until I moved away from Virginia in 1995.

Along the way, I witnessed Harry Gant winning in a wrecked car and I saw Ernie Irvan take the entire field to school one year. Martinsville was also the site of the one and only Dale Earnhardt win I was able to experience in person.

Speaking of Dale Earnhardt, that brings up another fantastic Martinsville memory. In 1994, I was employed in a management capacity by McDonald’s restaurants. I was fairly friendly with the folks in the Marketing office, and Lisa, the marketing manager, knew that I was a race fan.

McDonald’s was the primary sponsor on Jimmy Spencer’s car that season, and she asked me if I would be willing to help set up and host a marketing event at the Speedway. As you can imagine, I jumped at the opportunity.

The event consisted of a Friday morning breakfast for 100 contest winners that had entered at local McDonald’s restaurants. The breakfast was highlighted by a meet and greet with Junior Johnson, Jimmy Spencer, and Dale Earnhardt. My assistant manager, Ryan Smith, was also a big race fan, so I brought him along as well.

Now, to the DTC faithful readers, that Ryan Smith is the very same person that you know as Racer 187, husband of Candice Smith, who happens to be the founder of Drafting the Circuits.

Ryan and I had a great time, and we were thrilled to have met the Intimidator up close and in person in this somewhat casual setting. In a cruel twist of fate, the photographer on hand somehow mishandled the film, (yes, cameras still used film back then) overexposing the roll that had our pictures with Dale on it. I have, however, held on to this photo of me with Jimmy Spencer, who is actually one of my favorite NASCAR drivers.

I didn’t know it at the time, but this race weekend would be the last I would enjoy at Martinsville for ten long years. I changed career paths and spent time living in Wisconsin, North Carolina, South Carolina, New Jersey, and Pennsylvania before landing in Kentucky, which remains my home to this day.

My folks still live in Roanoke, VA, but I was never able to coordinate a visit home with a Martinsville race weekend until 2004. At that time, my lovely wife, Laura, and I were still dating. I could tell that this dating relationship was going to lead to more, so we planned a trip to introduce her to my family.

As luck would have it, it was also Martinsville weekend. She had never been to a race, so I had the unique opportunity to introduce her to my parents and my passion for racing all at once.

When we headed out for the track, I had sorely underestimated how much this little track had grown up over those ten years I was absent. Stuck in crawling traffic for a couple of hours, we had a lot of time to talk.

Laura was aware of racing, and she knew who most of the drivers were, based on the fact that she had a group of friends that held a Daytona 500 party every February. But, she was pretty much a novice at the bigger picture.

“I’m not sure I understand auto racing,” she said. “I’ve been to horse racing plenty of times. You bet on a horse, and cheer for it to win, and then bet on the next race.”

“Let me think,” she said. “You know, I’ve always kinda liked Rusty Wallace. My friends used to jokingly call him Randy Wally, and you and I both like Miller Lite. So why not?”

“Rusty Wallace,” I said, “That’s actually not a bad choice. He does well at Martinsville. I’ve seen him win here three or four times, but he hasn’t won a race in a while.”

“For some reason”, she said, prophetically, “I just feel like he is going to win today.”

We finally got to the track and entered the gate as the National Anthem was being played. We got to our seats, high up in turn two, just seconds before the command to start engines.

If was Jeff Gordon who dominated the early portion of the race, until a large chunk of the concrete surface in the turn dislodged itself from the track damaging Gordon’s car. The ensuing red flag to make track repairs lasted nearly two hours. Then, the unthinkable happened…fans began to run out of beer.

Martinsville doesn’t sell beer, but they will allow you to bring in as much is you can squeeze into a 14″ cooler. Now, I’m a veteran of many Martinsville races, and I have a cooler that not only meets the dimensions required, but will also carry a shit-ton of beer, if packed properly.

I packed well, but drank responsibly. Suddenly folks around us were offering ten-dollar bills for a single can of our Miller Lite. Let’s just say that Laura and I were able to enjoy a very nice dinner after the race.

When the racing resumed, Rusty was mired mid-pack, but I began to see the the Rusty Wallace that I remembered from the 1990s. With every lap that clicked off, Rusty would set up a pass, and then execute it brilliantly.

Sensing that she had, perhaps, picked the winning horse, Laura began to become very animated. Soon, she was cheering loudly for Rusty Wallace.

It warmed my heart to see this, she was truly enjoying the race. I knew that this would set up a lifetime of race weekends that we could spend together with both of us being equally engaged in the on-track action.

It did not, however, warm the hearts of the sunburned, drunken girls sitting behind us that seemed to take issue with Laura’s enthusiasm for Rusty Wallace.

From behind us, we could hear rumblings that sounded like this: “I haven’t heard that bitch mention Wallace all day, and now she won’t shut up!”

“Holy Shit!” Laura quietly said to me. “This chick wants to pick a fight!”

“Just ignore them…Rusty’s up to third,” I said. “Keep cheering him on.”

And, by the end of the day, Rusty Wallace won the race, and it would be his final Cup victory in NASCAR before he retired the following season.

Laura won our bet, the crazy chicks didn’t beat her up, and we have enjoyed going to races together ever since.

Oddly enough, since then, I haven’t been able to make a return trip to Martinsville a reality, and it blows my mind that another eleven years have passed since I visited that little paper-clip track that has provided so many racing memories.

I need to get back there soon, and share the experience with our children. Until then, Martinsville stays near the top of my list of favorite races.

NASCAR’s Chase for the Sprint Cup 2015 will be at Martinsville this weekend, I’ll be watching on TV. But, somehow, I will be there in spirit.