The Launch and Win: Who Saw that Coming?

Ed note: Please welcome our newest contributor, Patti Nolen, to Drafting the Circuits. Patti is an avid IndyCar Racing fan with an incredible passion for the sport. She makes no apologies for any grammatical errors you may find, but she loves to share her love of the sport with her two sons, and enjoys sharing her thoughts and observations with other IndyCar fans. Here is Patti’s latest blog coming out of the Nashville weekend. 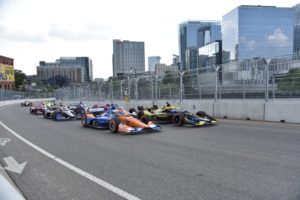 Late Sunday afternoon the much anticipated inaugural Big Machine Music City Grand Prix took place. While many attended in person the thought of Nashville in August kept me from making the trip. We watched from the comfort of our couch. After watching practice and qualifying I thought for sure many cars would not make it through the first lap and when everyone made it through turn one I was quite surprised. However, while they didn’t all crash on turn one of lap one, it didn’t take long for the yellows to start and once they did they kept coming.

By lap 2 we had a yellow for Dalton Kellett who seemed to be having issues keeping the car in gear. As the green was about to come out after the Kellett yellow, Marcus Ericsson launched his car over the car of Sebastien Bourdais. It was a wild hit and completely unexpected. Miraculously, Marcus had very little damage to his car and was able to return to racing. Sadly, Bourdais sustained too much damage and his race was over.

The race continued on with several more yellows and never really a chance for the race to get into a groove. The yellows completely threw off any pit strategy as the race only once went more than 10 laps without a yellow. Only 18 of the 27 starters would still be running at the end of the race. That said, I felt the clean up from the yellows took place in a timely fashion. 33 laps ran under caution. There were also two red flags. The first red flag was for contact involving at least seven cars. The track was blocked so the race needed to be red flagged. The last red flag was when Colton Herta hit the wall. Herta had dominated practice, qualifying and the first three quarters of the race. Honestly, because I thought the race would just be a parade with Herta leading is probably why I enjoyed the yellows. 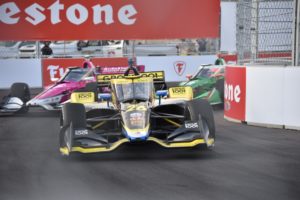 Yellows provide a way to mix things up that might not have happened otherwise. For Herta the yellows messed up with everyone’s pit strategy and eventually Herta found himself a few cars back but he quickly passed several cars and worked his way up to second.

It seemed just a matter of time before he would pass Marcus Ericsson who had shocked everyone by not only recovering from his earlier launch but was now leading the race. Colton would near Marcus on the corners only to have Marcus pull away on the straights. Eventually, Herta pushed too hard and hit the wall. The red flag came out to clean up the track but Scott Dixon was not able to take the top spot from Ericsson. The checkered flag flew and Marcus Ericsson won the race. Dixon was second and James Hinchcliffe earned a long awaited podium finish.

The race had no rhyme or reason and a third of it was run under caution but I prefer that to follow the leader. It ran longer than expected but after such a long break since the last race I was fine watching extra. Many complained about the track but that’s just how it goes with a new circuit. I honestly believe that even if they don’t change a single thing we would have a very different race next year because the drivers will know what they need to do to make sure they have less yellows.

I remember the race at St. Pete after the new aero kits were introduced. Every tiny hit created a mess of car parts, it was like watching legos disintegrate but the drivers eventually figured out how to drive without making any contact and the engineers redesigned the parts to work better. I am sure next year we will not see as much chaos. 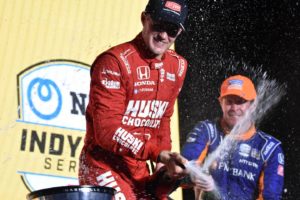 So congratulations to Marcus Ericsson on a win we will not soon forget. His second win for the year is both a surprise and a feat I doubt we will see again. He was up so high when he hit the back of Bourdais I’m still surprised he was able to work his way to the lead. He was also in the pits 5 times, the only other driver in the pits 5 times was Max Chilton. Max was the last driver still running at the checkered flag in 18th position. You need a lot of luck to win a race after so much craziness. I can only imagine how mad Chip Ganassi was watching the launch when the cars were under yellow and how elated he was when Marcus won. I would have liked to have seen that interview.

So while I doubt we will ever see a race quite like this one again, I enjoyed it and look forward to Nashville remaining on the schedule for many years to come.

Sadly, before I posted this race post we learned of the death of Bob Jenkins. So many people who have been following the Indy 500 and IndyCar longer than I have wonderful memories of Sid Collins and Tom Carnegie. While I was fortunate enough to hear Tom Carnegie, it is Bob Jenkins that associate with my years I’ve followed IndyCar. I loved when he called races on Verses and especially enjoyed hearing him at the Indianapolis Motor Speedway. I always enjoyed the extras too, the qualifying draw and award banquets. I wrote a post about Bob shortly after we learned of his news where I explain more of why he was a favorite but I believe Doug Boles said it best when he said, “There is nothing like Bob Jenkins voice to make a race fan feel they are in the right spot in the month of May.” I couldn’t agree more. Bob Jenkins will be greatly missed.

One last thing to note

I was as surprised as anyone when we learned that Helio Castroneves would be driving full time for Meyer Shank Racing. I’ve thought for years that he could become the first five time winner of the Indianapolis 500. That is within his grasp now. I was equally surprised to learn that Jack Harvey would not be returning to MSR. Silly season became a whole lot sillier with that announcement. It will be interesting to see where the dominoes fall.