Welcome to Drafting The Circuits -
Home : Blogs : The Alonso Factor: A Brief History of Formula One Drivers in Indycar 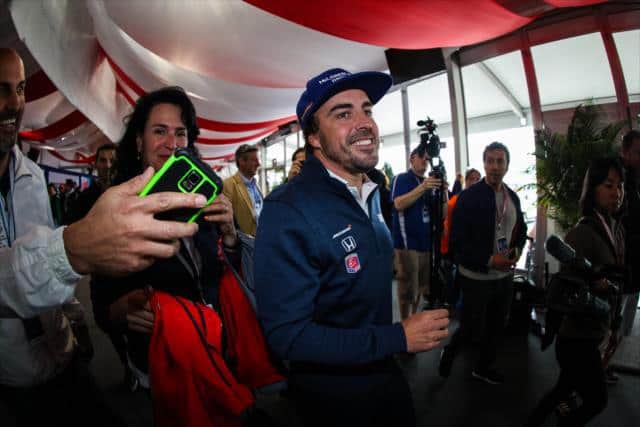 The Alonso Factor: A Brief History of Formula One Drivers in Indycar

As two-time World Drivers’ Champion, Fernando Alonso, prepares to wind up his final season in Formula One, speculation is rampant that his next chapter will see him become a regular in the Verizon IndyCar Series.

The scenario is actually quite likely, as Alonso has been quite forthcoming relaying how much he enjoyed his brief time in the Series when running the Indianapolis 500 in 2017.

Before any official announcement is made, there are lot of negotiations to make, contracts to sign and concessions to make to ensure that the deal is suitable to all parties involved.

While the intent of this article is not to give any credence to the rumor mill, I’ll put it out there. The strongest rumor involves Alonso running a Chevrolet-powered car entered by Harding Racing that is under the umbrella of both the McLaren Group and Andretti Autosport. This rather complex structure checks off a number of boxes, including keeping Alonso out of a Honda car while allowing Andretti to continue with Honda engines in their primary entries.

Whether or not it turns out to be true, close to true, or totally off the mark remains to be seen, but Alonso is set to test an Andretti car in September. So, take that at face value.

When, and if, an Alonso-to-IndyCar announcement becomes a reality, it will most certainly send shock-waves through the international motoring press. After all, Alonso’s appearance at Indianapolis in 2017 generated buzz for the Series that we haven’t experienced in quite some time.

Alonso isn’t the first to make the switch from Grand Prix racing to Indycar, and he won’t be the last. The current crop of drivers features a few with F1 experience, including Indy 500 winners, Alexander Rossi and Takuma Sato. Max Chilton and Sebastien Bourdais also have a number of F1 starts under their belt.

Formula One drivers attempting the Indianapolis 500 dates back to the 1950s when the 500 actually paid points towards the F1 Championship. Even so, very few active Grand Prix drivers came across the pond. The 1960s and 70s saw a number of Formula One’s finest descend on Indianapolis including Jim Clark, Graham Hill, Jackie Stewart, Peter Revson, Denny Hulme and Bruce McLaren. However, it would be several more years before we began to see F1 guys come to the Series full-time.

When CART broke from USAC in 1979, the schedule began to see more and more road races added to the calendar. This opened the doors to an influx of European and South American drivers that had an easier time adapting to the race courses than those that cut their teeth on dirt ovals.

The drivers that came over were not superstars by any stretch of the imagination. They primarily filled the back half of the F1 grid, and were looking for a more competitive ride. Some brought sponsors or money to the table, others impressed with their talent. Hector Rebaque, who was a bit of an anomaly as privateer owner/driver in Formula One, came over to CART and took a win at Road America in 1982.

Teo Fabi was, by far, one of the most impressive F1 transplants in the early days of CART. After a rather nondescript debut F1 season with Toleman, Fabi brought his talents to CART in 1983. He took the pole at Indianapolis and proceeded to lead handily until fueling issues on the first pit stop cycle ended his day. By the end of the season he posted four wins, finishing second in the standings a mere five points behind Al Unser Sr.

Fabi would spend the next several years bouncing back and forth from F1 to CART and back again, but he never matched the success of 1983. An interesting side-note is the fact that he was the first, and only, driver to win an Indycar race in a Porsche powered car.

Subsequent seasons saw a number of names familiar to F1 fans on the entry list for CART races. Some like Rupert Keegan, Bruno Giacomelli, and Derek Daly failed to make an impact. Others, like Raul Boesel, Roberto Guerrero and Mark Blundell found limited success. Others, like Danny Sullivan and Eddie Cheever now have their face on the Borg-Warner Trophy.

With the notable exception of Mario Andretti, who was a USAC regular before going to F1, CART lacked a true F1 superstar. This all changed when two-time Champion, Emerson Fittipaldi, came out of retirement to begin a second career in Indycars.

Fittipaldi entered the series, with minimal fanfare, in 1984 running a limited schedule. In 1985, he joined the Patrick Team and took his first series win at Michigan. His new career would eventually include a stint with Team Penske, 22 CART victories, one series championship, and two Indy 500 wins.

With Mario and Emmo, the Series featured two former World Champions in the field. A third would join soon.

Ayrton Senna had caused quite a stir when he tested Roger Penske’s Indycar at Firebird Raceway, but he never had serious plans to join the series. Nigel Mansell, however, was a different story.

Mansell was an interesting character with a polarizing ‘love him or hate him’ personality. With an ego the size of Mount Everest, more often than not, he had the talent and bravado to back it up. He had threatened to quit F1 altogether when the Ferrari team signed Alain Prost, relegating Mansell to No. 2 status. It was Frank Williams that saved the day, offering the British driver a contract that would guarantee his No. 1 status, and put him into one of the best cars on the grid.

The combination was dynamic, with Mansell dominating the 1992 season, but is was far from a match made in heaven. When Mansell demanded a hefty pay raise after winning the Championship, Williams balked at the suggestion. The car was so good, Williams argued, that other drivers were lining up and offering to drive for free.

When Mansell joined the CART Series in 1993, it had very little to do with any interest he had in Indycars. It was more of a piss-off to Frank Williams and every one else that he felt had wronged him in F1. Nonetheless, a media frenzy descended on the CART Series, the likes of which had never been seen before. As the reigning F1 Champion, Mansell’s switch truly upset the balance of the racing world.

He delighted the International press by taking the race win in his first outing, and eventually winning the Championship. A strong run to third place at Indianapolis also received high praise.

By 1994, most of the gimmick had worn off. A mediocre run to eight place in the final standings, with several frustrating DNFs along the way, had Mansell packing his bags again. He would make a very brief return to Formula One before calling it quits.

This particular era saw a number of F1 drivers come over to CART, and a number of CART drivers go over to Formula One. The cars were much more similar to one another than they are today, and a CART Championship was a legitimate springboard into Formula One. Undoubtedly, one of the most exciting crossover drivers in the late 1990s was Alex Zanardi.

The Italian driver found himself unemployed after a few lackluster seasons in F1 with Team Lotus. At the request of chassis manufacturer, Reynard, Chip Ganassi tested the young driver in his CART machine. Satisfied with what he saw, Ganassi signed Zanardi on to partner Jimmy Vasser in the 1996 season.

Zanardi was everything Ganassi could have hoped for, and more. He was confident, aggressive, had a good understanding of the car, and he was brimming with personality. More importantly, he was quick; blindingly quick. In three CART seasons he racked up fifteen wins and two season championships. F1 couldn’t believe that they had let this one get away, and Frank Williams came calling in 1999.

Zanardi’s second foray into Formula One wasn’t much more fruitful than the first, and he returned to the CART Series in 2001. Later that same season, he lost both his legs in a terrifying crash at the EuroSpeedway Lausitz. Zanardi’s subsequent recovery from the near-fatal crash is a true testament to the human spirit. He continues to race in a touring car specially modified with hand controls. He has also earned four gold and two silver medals racing a hand-cycle in the International Paralympic Games.

Should Alonso make the move to Indycars, it will be huge. Make no mistake about that. What happens next is anybody’s guess. He should be competitive rather quickly based on his performance at Indy, and the equalizing nature of the Verizon IndyCar Series. While some career choices have kept him out of Victory Lane in recent Formula One seasons, he is still one of the most talented drivers on the planet.

Also, the question arises of how long he plans to stick around, should he join the series. Is his motivation simply to win the Indy 500, call himself a triple-crown winner and ride off into the sunset? Or, is he looking at a long and fruitful second career beyond F1?