Welcome to Drafting The Circuits -
Home : Blogs : Storms, Strategy and Surprises: The IndyCar Dual in Detroit 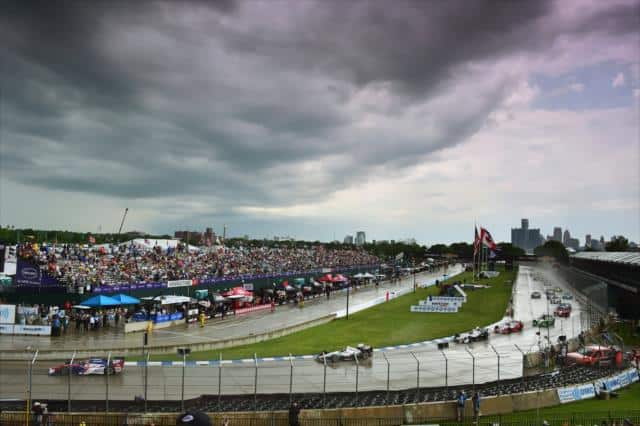 Storms, Strategy and Surprises: The IndyCar Dual in Detroit

Mother Nature played her hand yet again against the Verizon Indycar Series in their bid to stage two races at Belle Isle Park in Detroit, Michigan.

A wet race, or a race with changing weather conditions, has an equalizing effect on the field. It magnifies driver’s mistakes, and it puts the race strategist in a position where the calls on the day can make him either a hero or a zero.

With one eye on the radar, and the other on the competition, these make-or-break decisions between the driver and the strategists are often the story of the weekend. The Chevrolet Indy Dual in Detroit was no exception.

Indeed, few would have predicted that by the end of the weekend, we would see four of the six podium spots available between the two races be occupied by Honda drivers. Few would have predicted that only one Penske driver would take a podium, while all four Ganassi drivers would be shut out. Even fewer would have predicted an Andretti Autosport 1-2 finish, given the frustrating start to the season that team has had to endure. This is the sort of thing that can wreck a guy’s fantasy racing team. At the same time, this is one of the things that make these type of events so interesting to watch unfold.

Race one began in wet conditions, and the start was pushed up a half hour with the threat of more severe weather in the forecast. IndyCar called for a single-file start, and Penske driver Will Power led from the pole.

It was Takuma Sato, however, driving the A.J. Foyt entry, that was the class of the field in the early going. The much-maligned driver, starting from the fourth position, had a great start, and made quick work of getting to the front. On Lap 3, he wrestled the lead from Power and began to pull away from the field.

From there we began to see a flurry of yellow flag laps as the drivers fought the wet track. Rodolfo Gonzalez, Tony Kanaan, Graham Rahal, Stefano Coletti, James Jakes, and Charlie Kimball all found the tire barriers.

As the rain let up, and a dry line began to form around the track, Marco Andretti was the first driver to make the move to slick tires on lap 9. To many observers, the change seemed ridiculously early, but it was a strategy call by team owner, Michael Andretti, a veteran of many wet races of his own.

The younger Andretti showed considerable patience, keeping the car on the track, running lap times well off of the leader’s pace. Knowing that the rest of the field would eventually make the change to dry tires, Marco bided his time.

Sensing that the move was going to pay off, Andretti Autosport also brought Carlos Munoz in for slicks three laps later. When the rest of the field began their stops, Andretti and Munoz cycled to the front.

Andretti then led handily for the bulk of the event, through the next cycle of pit stops. In the later stages of the race, sprinkles began to fall around the track, and the team began to call Marco in for a set of Firestone rain tires.

Marco opted to stay out for several more laps, feeling that the car was good enough to last until the fuel window opened up. Andretti and Munoz gained a huge advantage on the field through this period as the rain seemed to hold off.

Andretti finally came if for fuel and rain tires, handing the lead to his teammate, Munoz. On the virtue of having pitted later on the previous cycle, Munoz built an enormous lead over the next seven laps. When he made his pit stop, he was able to maintain a lead of over 20 seconds on second-placed Andretti.

Shortly afterwards, the deluge of rain began. With lightning in the immediate area, officials red-flagged the race.

After lengthy discussions, and no break in the weather for the foreseeable future, IndyCar called the race official.  Carlos Munoz was declared the winner, the first win of his IndyCar career. Marco Andretti was second, and Simon Pagenaud took the third spot for Penske Racing.

It seemed to be a bittersweet victory for Munoz, who was ready to continue racing.

“Racing is racing, which is what happened with the weather.” said the Colombian driver, “It was a great call with the strategy and a great result for the team with a 1-2. I had the fuel to go laps longer. I wanted to get my first win by doing all the laps, but I’m really happy for my team.”

Sunday morning dawned even wetter than Saturday. The Series managed to get through the first round of qualifying on a soggy track. As the rain picked up at the start of session two, qualifying was scrapped and the cars lined up on season points.

This caused some of those who had completed the first session to cry foul. Sage Karam, who had set the fastest time in the early session, was very vocal with his displeasure. For him, the front row spot he felt he had earned now evaporated, and he would instead start twentieth.

The race started in the mid-afternoon, in conditions that were still quite wet. From an all-Penske front row, Will Power led at the drop of the green. On lap 3, his teammate, Juan Pablo Montoya, went to the front and the Penske pair began to dominate the race.

Saturday’s winner, Carlos Munoz was unable to continue his momentum when his car developed a water leak and he exited the race on the fifth lap.

Despite the wet conditions and limited visibility, the drivers had a very clean start and went past the half-way point caution free. After that however, it was a different story.

Rodolfo Gonzalez brought out the first caution of the day on Lap 37 when he found the turn four wall. With the track beginning to dry, we saw the leaders pit for slick tires. Several cars, including Conor Daly, opted to stay out on the grooved Firestones.

When the field went back green, Conor Daly found himself leading his first laps in the IndyCar Series, much to the delight of the fans. The young American driver was drafted to fill-in for the injured James Hinchcliffe at SPM Racing, and was aiming to make the most of the opportunity.

There is an old saying that ‘cautions breed cautions,’ and this proved to be the case. The event began to become reminiscent of the race in NOLA earlier this season, where we couldn’t get more than two or three laps of green between the cautions.

In the brief series of green laps we saw, Sebastien Bourdais and Takuma Sato were making a charge toward the front as Daly held onto the lead. When Daly pitted for slicks on lap 50, Bourdais inherited the lead. He then chose to stay on the course, knowing that he could not make it to the end on fuel.

Team principle, Jimmy Vasser kept the car out banking on several more caution laps. Perhaps Bourdais could stretch the fuel if there was enough yellow.

Vasser got his wish as some of the oddest incidents on the track occurred. First we saw Ganassi driver Charlie Kimball drive right in front of his teammate, Scott Dixon. Kimball got away with the move, at the expense of punting his much more experienced team-leader into the wall. Watching this, I can only assume that Kimball had momentarily forgotten that his car had rear-view mirrors. It certainly defied logic.

When the green waved again, Penske teammates Will Power and Helio Castroneves collided in grand fashion, taking one another out and scattering enough debris on the track for IndyCar to red-flag the race to clean it up.

The yellows were playing into Bourdais’ hands, but fuel was still a big question. Compound that with the fact that he would have to face a stout challenge from Sato, who had fought his way up to second place.

The timed-race rule came into effect, with the race being shortened from 70 laps to 68. When the track went green, there would be three laps remaining.

Bourdais did a brilliant job fending off Sato, as the Japanese driver looked for a way around. Bourdais took the win with fumes left in the tank as Sato came home second. Graham Rahal took the third position and picked up a spot in the points standings, moving up to fourth.

“It was just about as nerve-racking as it gets. When we elected to stay out I was like, Oh, man, it’s all or nothing.” said Bourdais. “It was the right call again today. The difference is we obviously deserved it because the boys worked really hard and we were on the pace, we passed a bunch of cars and made the moves when it mattered. We made it stick all the way to the end.”

With their respective wins, Munoz and Bourdais became the sixth and seventh different winners in the eight races run this season. Munoz joins Josef Newgarden as the second first-time winner of 2015.

The Series moves next to the high speed oval track at Texas Motor Speedway for the Firestone 600 on June 6th. Television coverage will provided by NBC-SN.