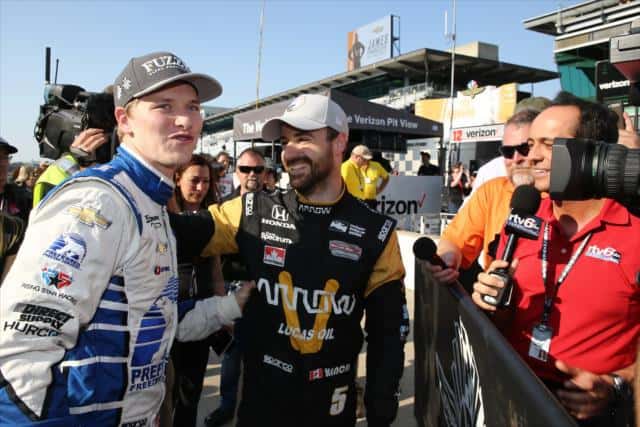 In stark contrast to one year ago, where a dullish, abbreviated qualifying session saw Penske and Ganassi cars in the top five spots, and Chevrolet-powered cars occupying eight of the top ten positions, the run for the 100th Indy pole produced a wide-open field.

Three different teams, and both engine manufacturers, are represented on the front row. James Hinchcliffe, in the Schmidt-Peterson car, took his first Indy 500 pole in the final run of the day, bumping Carpenter Racing’s Josef Newgarden to second place.

Andretti Autosport driver, and 2014 500 winner, Ryan Hunter-Reay took the third spot followed by two of his teammates, Townsend Bell and Carlos Munoz. Will Power was the highest qualified Penske car, and will start from the sixth position.

Hinchcliffe, who was seriously injured in practice for last years 500, was ecstatic.

“I came into this month really hoping that we would have a new story to talk about after what happened last year and I think we did it. I can’t believe it. Honestly, I’m kind of at a loss for words which, as you know, is rare for me,” said the Canadian driver. “It’s incredible. Now we’ve got the best seat in the house for the start of the 100th Running of the Indianapolis 500.”

Fears that the Chevy camp would once again dominate the 500 were a distinct possibility, having been dominant for the early season. When Honda cars were fastest in tire testing at the Speedway, the claims of Chevrolet sand-bagging were thrown about.

The funny thing is, when the stars of the Verizon IndyCar Series returned to Indy for the month of May, the Hondas once again proved to be quick. Many felt that Honda had all their cards on the table, and Chevy had a few aces up their sleeve.

It was just a matter of time until Chevy would show everything they had, or so we thought.

The fact is that Honda’s speed was for real, and some of the Chevy contingent were truly struggling to keep up. The claims of sand-bagging subsided, and the debate over the domed-skids seemed to fade into the background, as Honda cars remained at or near the top of the speed charts for the balance of the practice days.

At least one writer came up with the alternate conspiracy theory (get your tin-foil hat ready) that Honda had actually been sand-bagging for the better part of a year and a half in order to lull the Chevy teams into a false sense of confidence heading into the 100th running of the Indianapolis 500.

While that is all good fun to joke around with, undoubtedly the story of the month has to be the Schmidt-Peterson Team.

After Hinchcliffe had set fastest time in Saturday’s qualifying session, teammate Mikhail Aleshin made a banzai run as time expired to bump his way into the Fast Nine Shootout. Oriol Servia, in the third SPM car, set the fastest time in Sunday’s first group, (to set positions 10-33) putting all three team cars solidly into the top ten.

“I just managed to go out on track and that was my only chance to get up there,” said Aleshin. “You know, with team help I obviously used it for 100 percent. I want to congratulate the team, all the team with the results that we had. I think all the team is very strong and especially James’ results shows it. I think it’s a good official start of the weekend. And good official start of 500 for all team.”

At the opposite end of the spectrum from the feel-good story coming out of Schmidt-Perterson, we have the Chip Ganassi Racing Teams.

One of the most dominant teams in IndyCar will find the four cars of Scott Dixon, Charlie Kimball, Tony Kanaan, and Max Chiltion start 13th, 16th, 18th and 22nd, respectively.

Chilton crashed hard in Saturday morning practice, denying him a qualifying run in the opening session. To add to the team’s troubles, 2008 Indy 500 winner, Scott Dixon, lost an engine on Sunday morning. Members of all four crews put together a Herculean effort to complete an engine change in time to get the car in line for qualifying.

Dixon was quick to give credit to the team-centric approach that has worked so well for the Ganassi organization.

“Team Target and the other CGR teams changed it all out and got us ready for qualifying in just over an hour. That is absolutely unheard of,” said the four-time series Champion, “This is truly why this is a team sport. I obviously didn’t pick up a wrench today and they probably liked it that way, knowing my mechanical skills. IndyCar would not have let us in qualifying if we didn’t get the car ready in time and we would have started dead last.”

Despite the struggle for speed, and the unexpected obstacles, the team remains optimistic for a solid result come race day.

It’s just been frustrating when you know you can be faster, but it just doesn’t come together,” said Tony Kanaan. “It is what is it is, though. We’ll just need to put this behind us and refocus on our race car. I’ve said it before, but I started further back in the field when I won in 2013 so no one should be writing us off yet.”

The historic 100th Running of the Indianapolis 500 presented by PennGrade Motor Oil is scheduled to take place Sunday May 29, 2016 with television coverage provided by ABC-TV.