Welcome to Drafting The Circuits -
Home : Blogs : Rookie of the Year: The Curious Criteria at Indianapolis 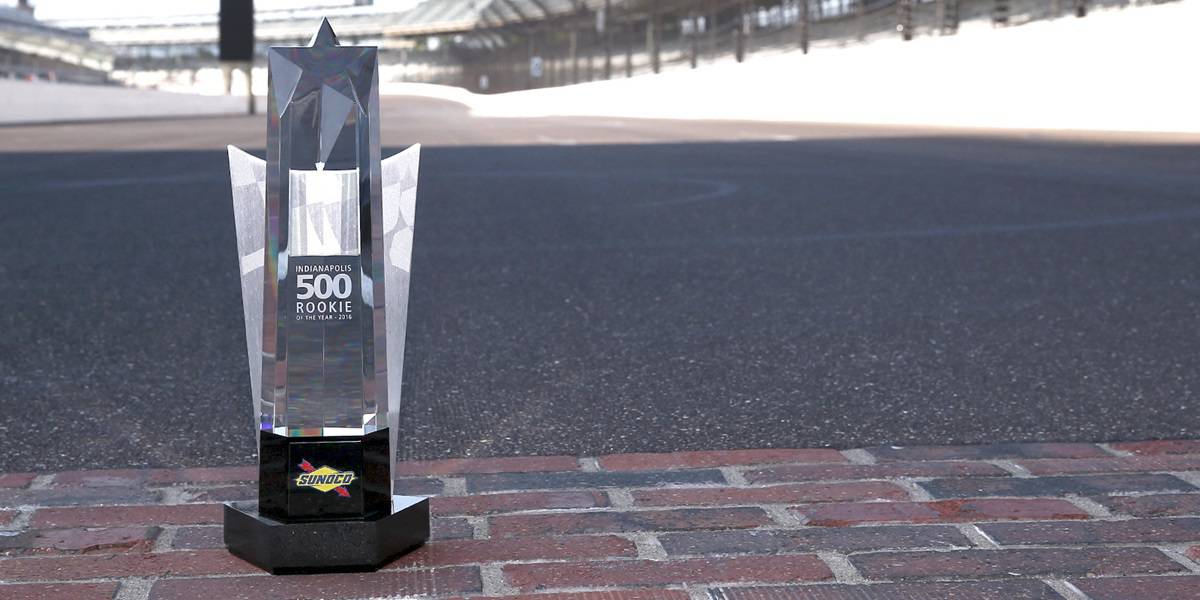 Rookie of the Year: The Curious Criteria at Indianapolis

The Month of May has arrived, and the stars and cars of the Verizon IndyCar Series have set up camp in Speedway, IN for the next few weeks.  By the time Memorial Day rolls around on May 28, we will have a race winner, and a new Rookie of the Year.

The entry list for the 102nd Running will feature four rookies attempting to qualify for the race, and take home the Sunoco-sponsored ROY award. Matheus Leist, Robert Wickens, Zachary Claman DeMelo and Kyle Kaiser are this year’s candidates.

The Indianapolis 500 Rookie of the Year award occasionally comes with some controversy attached, based on the rather subjective criteria in the selection process. While more often than not, the award goes to the highest finishing rookie, this is not always the case. Because it’s a long race, with attrition taken into account, the most-deserving rookie does not always come home with the highest finish.

Performance in qualifying is taken into account, along with various other opinion-based factors, such as how the driver interacted with the press, other drivers and fans, the driver’s overall skill level, and the degree of professionalism shown throughout the month.

The voters, comprised of a panel of journalists, officials, historians, and other Indy 500 experts, are not given a scorecard, but are simply asked to use their own judgement with the criteria, and submit two names: a first and second choice. Since there are no tie-breakers, co-rookies of the year have been named on five occasions since the inception of the award in 1952.

To compound the ambiguity, the definition of a Rookie at IMS is a bit contrary to what most would expect. Generally speaking, a Rookie is defined as someone participating in their first year at a particular level in sports. The word Rookie can also be used to describe the newest salesman on the floor at the car dealership, or a police officer fresh out of the Academy. The point is, the word Rookie is generally associated with inexperience.

Because the Indianapolis Motor Speedway defines a Rookie simply as a driver that has never taken the green flag at the Indianapolis 500, even the most highly accomplished drivers are still considered rookies during their first 500. It might seem odd to classify a 15-year veteran of the NFL as a Rookie merely because he is starting his first Super Bowl, but that is exactly how it works at Indy.

This past year, after the 101st running, we had controversy rear its ugly head after the ROY announcement. It was Fernando Alonso, a two-time World Driving Champion in his 17th season of F1, edging out Ed Jones, a recent graduate of Indy Lights in the voting.

Many felt that Jones, who finished third despite battling a damaged front wing, was more deserving than Alonso, whose day ended with a blown engine and 24th place. Before retiring, however, Alonso had a stellar month, qualified well and led 27 laps in the race. A strong case could be made for either driver, particularly when considering Jones’ status as a ‘true’ rookie.

Some felt that the name recognition that Alonso brought to the Speedway resonated well with the voters, combined with the other subjective qualities displayed, made him a lock. Alonso joins Jim Clark, Jackie Stewart, Denis Hulme and Nigel Mansell on the list of active or former F1 stand-outs that were named ROY at the 500.

Sometimes even a solid month, combined with a good finish, won’t guarantee Rookie of the Year. In 1972, with eight rookies in the field, Sam Posey quietly put together a respectable month qualifying 7th. He kept his nose clean for 500 miles and brought the car home fifth. The ROY was given to Mike Hiss, who finished two positions behind Posey. The fact that Hiss has started 26th on the day and charged his way into the top-ten evidently held some weight with the voters.

This exact scenario played out in reverse in 2014. An exciting drive from 31st up to 9th did not result in ROY honors for 19-year-old Sage Karam.

The award instead went to the highest finishing rookie, who qualified 12th and finished 6th. That Rookie was former NASCAR Cup Champion Kurt Busch, who like Alonso, brought name recognition to the event.

While young Sage Karam was, indeed, a true rookie, it is problematic to put this label on Kurt Busch. Sure, Busch’s experience in IndyCars was limited to a few private test sessions. However, given the length of his Stock Car career, and the long season that NASCAR runs, Busch literally had logged thousands of more racing miles around an oval track than the rest of the field combined. But, again, Indianapolis has it’s own criteria that makes him a rookie.

The finishing position, while important, has taken a back seat to race day or qualifying performance a number of times. In 1959, Bobby Grim dropped out before the halfway point, and was the fourth highest finishing rookie. The fact that he qualified fifth and ran well during the first half gave him the award.

In 1969, Peter Revson finished ten laps ahead of Mark Donohue, only to see Donohue take the award. Donohue fell behind early in the race, sitting stationary in the pits as repairs were made to the car. After rejoining, his pace was faster than Revson through the balance of the day, but the lost laps could not be made up.

One might think that winning the event as a Rookie would surely guarantee ROY honors, but even that is not always the case. While Rookie race winners Juan Pablo Montoya, Helio Castroneves and Alexander Rossi were all named ROY, Graham Hill found himself on the short end of the stick in 1966.

While Hill’s face is now forever emblazoned on the Borg-Warner, it was his younger teammate, Jackie Stewart, that was named ROY. With a one-lap lead on the field, Stewart looked to be headed towards certain victory when his engine failed just nine laps from the checkers. The voters felt that Stewart’s overall performance eclipsed Hill’s despite the fact that Graham took the win.

Looking at this year’s Rookie class, Schmidt-Peterson Racing’s Robert Wickens is easily the most experienced of the four. The 29 year-old Canadian has a wealth of open-wheel experience running in European single-seater classes including GP3 and Formula 2. He spend the past six seasons running DTM Touring cars in Germany, and he has been impressive thus far in his IndyCar debut season with two podiums already in the bag.

The other three rookies are all graduates of the Indy Lights Series. The youngest is 19 year-old Matheus Leist running for the A.J. Foyt Team. Kyle Kaiser, 22, is entered with Juncos Racing and is the 2017 Indy Lights Champion. The final rookie entered, Zachary Claman DeMelo, 20, found himself in an Indy 500 ride with Dale Coyne Racing as a last-minute replacement for Pietro Fittipaldi, who was injured in a Sports Car racing accident. DeMelo had a partial 2018 season scheduled with Dale Coyne that did not include Indianapolis until fate came calling.

All three of these young drivers have shown promise, but they also need to make the field. With 35 cars vying for 33 spots, there will be two drivers sent packing. The potential exists that one or both of the bumped cars will come from the rookie class. Stay tuned.