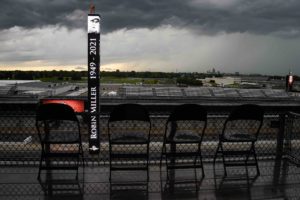 I was a girl that did not follow sports except for the Indianapolis 500. I lived in the Chicago suburbs and neither the nightly news or the newspaper carried much information, if any, about any form of racing. Somewhere around 2006, I started following the entire IndyCar season. I had to make sure to watch the preshow to learn what had been happening with teams and drivers.

Eventually, I turned to the internet and the first site I found was Robin Miller’s Mailbag. While there were many questions referring to the good old days, there was plenty about the current season and Robin became my main source for keeping up on IndyCar news.

Although I had been watching the Indianapolis 500 since 1985, I was new to the IndyCar series as a whole but it seemed no matter where I turned Robin Miller was the one breaking the news about IndyCar. He knew what teams were doing, where drivers would end up each season and which tracks were being added or leaving the schedule. In 2011, Miller joined the Versus broadcast and did a hugely popular grid run with the late Dan Wheldon. Fans loved this because we all loved Dan and missed seeing him in a car so the next best thing was having him on the broadcast and because Robin gave it his all and never shied away from asking the tough questions or saying what he thought. The two worked together wonderfully. After Dans passing Robin continued the grid run, he still asked the hard questions, gave insight and enjoyed reporting but the best ones were done with Dan. 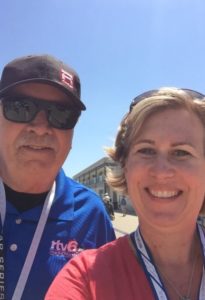 I had the pleasure of writing into the mailbag, sending Robin a personal note after Dan’s death and meeting him on several occasions. Robin was always kind and took interest in talking with me and encouraged me to continue with my blog. I don’t believe he ever read it but took time to listen when I told him about it at Road America a few years back.

Among Robin’s talents were the pieces he did when we lost someone in the racing community. His voice as he talked about our heroes brought both tears and comfort. Bob Jenkins was the last tribute Robin did and I wondered as I listened who might do Robin’s. I truly had no clue we would learn the answer to that so soon after I asked. We all knew Robin was battling cancer but I assumed he still had months left. I was shocked to learn that we had lost him. Less than two weeks ago he was at the Indianapolis Motor Speedway, I’m sure he could think of no greater place to be or people to be surrounded by. AJ Foyt was also in Indy, his main reason for attending was to see Robin. Here is what AJ Foyt said about Robin. I can’t think of a better tribute to end my post.

“They broke the mold when they made Robin Miller. A lot of people didn’t understand Robin and I didn’t either when I first met him and then I come to find out, he knew what the hell he was doing. Robin was one of the best writers there was, and he really called a spade a spade, and that’s what I respected about him.

“I got to know him quite well and I’m glad I did. He was a great friend. I don’t think there was another guy that loved racing as much as he did. The fact that he drove midgets and he knew what a race car was like, I think helped him be a great writer too. He knew what it took.

“I’m awful glad I went to Indy to see him. We had lunch together and I stayed for the race, but I mainly went up there to see him. We had a good time talking about the old days. I know he suffered pretty hard the last two years, but man he was tough. He’s better off now but I sure will miss him.”