Welcome to Drafting The Circuits -
Home : Blogs : Revisiting 1981: How ABC-TV Manufactured a Storm 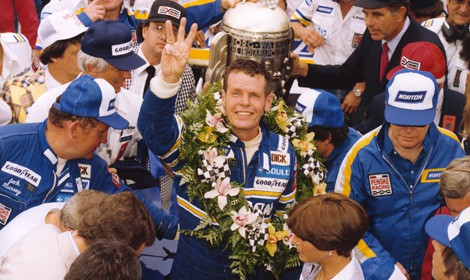 Revisiting 1981: How ABC-TV Manufactured a Storm

To the best of my recollection, this is how the events of the 65th running of the Indianapolis 500 mile race, contested on May 24, 1981 unfolded.

I was 13 years old, and my family decided upon a camping trip for Memorial Day weekend; a flippin’ camping trip in the Pocono Mountains.

Mind you, I’m not totally against camping, especially if it’s at a place like Watkins Glen on Grand Prix weekend. But, as a young teen, I was rather unenthusiastic about this particular trip, seeing as how it was Indianapolis 500 weekend.

On the bright side, we had a little black-and-white TV, with a screen that was probably not more than 13 inches. If you utilized some tin-foil on the rabbit ears, and rotated it just right, you could pull in a static-filled picture from the ABC-TV affiliate in Wilkes-Barre/Scranton. If you kept your hand on the antenna, it would look a little clearer.

While the rest of the family was roasting marshmallows around a campfire, I was holed up in the camper with my face a few inches in front of this crappy TV trying to get a clear picture of the Indy 500. It was late evening, the race was shown tape-delayed back then. It wouldn’t be until 1986 that the 500 would receive live flag-to-flag coverage.

Watching the race, I was shocked when Rick Mears was burned in a pit fire, and I cringed at the horrible wreck that Danny Ongias experienced only minutes later.

However, on lap 149, the broadcast duo of Jim McKay and Jackie Stewart became very animated when race leader Bobby Unser exited the pits under yellow.

“What’s he doing?” exclaimed McKay. “He…oh look at that! He’s passed about half a dozen cars.”

“That is a no-no!” added Stewart “He has accelerated probably in the haste of leaving the pit lane, he’s certainly overtaken these other cars. I’m not sure why he did that. I know that you’re certainly not supposed to do it.”

As Stewart and McKay went on to explain the rules, and insinuate that Bobby Unser certainly should have known better, the race went on. Despite the fact that, to the television crew at least, the infraction was blatant, there was no penalty and Unser cruised to the checkered flag, drank the milk, donned the wreath and celebrated his win. Mario Andretti came home second after starting on the last row.

The ABC-TV coverage then cut to a live shot, close to midnight Eastern time, where they discussed a protest being filed by Mario Andretti and the Patrick Team. The broadcast ended on a cliff-hanger, enticing us with the fact that the results would not be made official until the next morning.

Sensing something big, I got on my bicycle first thing in the morning and rode down to the corner store at the Campground to find a newspaper. I know, this sounds odd to you younger readers, but that is how we got our racing news in the Dark Ages.

There it was on the sports page “Unser ousted: Andretti wins Indy.”

I was excited. After all, I was a big Andretti fan. This was like the best news ever, although it would revert back to the original scoring several months later.

And that is the way that I thought that these events had actually unfolded.

Yep. That’s what I thought…that’s what a lot of us thought.

Over the years, It always bothered me that the penalty wasn’t assessed during the race. The ensuing court proceedings used that very same argument to hand the race win back to Bobby Unser in October.

Something never felt quite right.

There is, as a matter a fact, a very good reason that race control didn’t drop a penalty at the moment of the infraction.

The infraction was barely noticed…

Sure, Mario noticed. “What is he doing?” he radioed back to the team. The team assured him to be careful and not do the same thing. The move caused a few raised eyebrows with some other teams as well. Not much was made of it, until post-race.

Do you know who didn’t notice?

Every race official including Tom Binford, the Chief Steward. Binford wasn’t aware of said infraction until later in the evening when the Patrick Team filed an official protest. At that point he made the statement that he would ‘review the video.’

As a matter of fact, if you were able to dredge up an archived tape of the IMS Radio broadcast, featuring Paul Page, Rodger Ward and Bob Jenkins, there was absolutely no mention of Unser’s infraction, or Mario’s supposed infraction either.

If it went unnoticed by the Radio Broadcast, the race officials, and Tom Binford, then why was the television crew ‘Johnny on the spot’ with the news?

ABC-TV packaged a lie, and sold it to us, lock, stock and barrel.

Now, I don’t mean they lied about Bobby Unser passing cars under the yellow, because that most certainly happened. They twisted the truth with the immediate reactions of both Jackie Stewart and Jim McKay.

While some parties, namely USAC, may have looked foolish for missing this, ABC had the luxury of making sure that they didn’t look foolish.

Because of the tape-delayed nature of the broadcast, it was the standard operating procedure for ABC at the time to tape the commentary from the start and finish of the race as it happened, and then lay down the rest of the commentary during post-production.

This allowed all of the differing camera angles to be edited together, and create a commentary track that matched precisely what the viewer was seeing.

I’m not sure what Jackie and Jim actually did during the middle portion of the race. They could have been paying close attention and taking notes for the commentary later, or they may have been eating hors d’oeuvres and entertaining the ABC brass. It doesn’t really matter.

With a protest looming, ABC called in the broadcast team for the commentary intent on focusing heavily on this infraction from Unser that went virtually unnoticed when it happened. Stewart, McKay and ABC did a fine job of making the incident appear blatant and premeditated. And perhaps it was. After all, the final decision, while reinstating Unser, slapped him with a $40,000 fine for breaking the rules.

With the race now having been broadcast to millions of viewers in prime time, the ball was firmly in the court of USAC and Tom Binford, to act quickly.

Well, we all know what happened next.

USAC’s decision to strip Bobby Unser of the win, only to reinstate him months later, caused a ripple effect that saw Unser quit racing and walk away from the sport that he loved.

His friendship with Mario Andretti was fractured for decades. Discussing the events of 1981 was a sore spot for both drivers in the ensuing years. Mario refused to return the winners ring, so Bobby had IMS make him a ring that he describes as “prettier than Mario’s”

The debate has raged for years, with some even suggesting that third-placed Vern Schuppan should be the rightful winner.

We may never have a satisfactory answer that appeases all parties, but the fact remains that through the process, Bobby Unser dropped blame squarely into Jackie Stewart’s lap, and by extension, ABC-TV.

“Bobby was upset” Stewart explained during a 1982 interview with the Detroit Free Press “He said that if it had not been for me and ABC, USAC wouldn’t have had to take action.”

“My job is not to advise officials, but it is to inform my viewers,” Stewart continued. “Had I not pointed that out to illustrate an infraction of the regulations as I understood them, I would have done a great disservice to the audience.”

At the end of the day, ABC-TV didn’t really do anything wrong by reporting what had happened, albeit it hours after the fact. This day and age, sports officials rely heavily on television angles via instant-replay to make calls that effect the outcome of sporting events.

In a sense, ABC was ahead of the curve. But, don’t try and tell that to Bobby Unser.