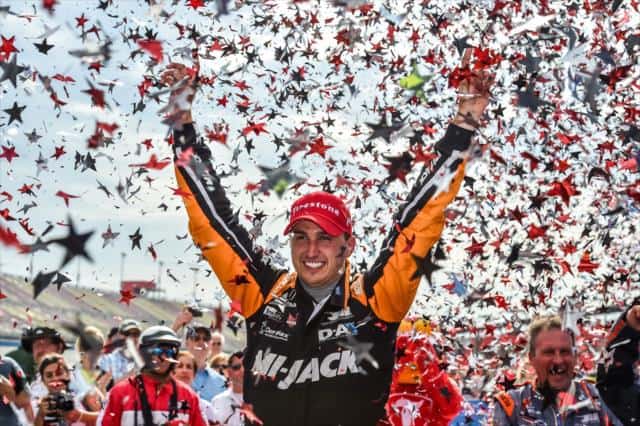 For Graham Rahal, a second win in the Verizon Indycar Series was a long time coming. His first win in the Series came in back in 2008 and he has been shut out of victory lane ever since. That all changed on Saturday afternoon at the Auto Club Speedway as Rahal took the win at the MAV-TV 500.

Rahal has been absolutely resurgent this season, particularly on the street and road courses, so a win at a 500 mile oval race was especially sweet for the 26 year old driver from Ohio.

“You don’t know how good this feels. It’s been so long coming; it’s awesome. Went we went back to 16th, I was definitely a little worried there. I knew my car was really good” said Rahal. “It was a hairy race. I feel like this year we have been knocking on the door a lot. We’ve been so close and I feel like we deserved it before but hadn’t gotten it yet, so to get this one feels unbelievable.”

And a hairy race it was indeed. The high downforce setup created pack racing throughout the day, drawing criticism from a number of drivers. The small crowd on hand, estimated at less than 5000, was treated to three, four and sometimes five-wide racing throughout the field all day long. By the end of the day we saw a race that contained 80 lead changes amongst 14 drivers, a new IndyCar record.

At the drop of the green it was Marco Andretti, from the third starting spot, who jumped to the lead. It was quickly evident that the Auto Club Speedway offered a number of different racing lines that would work for the drivers. Andretti, Helio Castroneves, Juan Pablo Montoya, Tony Kanaan, Sage Karam and Takuma Sato all took turns leading in the early stages, but nobody was able to stake a solid claim to the lead and pull away from the field.

The first 135 laps of the 250 scheduled went down at an amazing pace as the wheel-to-wheel racing continued through the field without incident. At that point the first caution waved as Helio Castroneves found himself bottled up between Will Power and Ryan Briscoe, and spun off the track.

Twenty laps later, teammates Ed Carpenter and Josef Newgarden tangled and found themselves in the wall. The double-DNF was a major disappointment for the CFH Racing team, who were coming into the weekend having achieved their first 1-2 team finish two weeks ago in Toronto.

Eventual winner, Graham Rahal dodged a major bullet during a bungled pit stop. As Rahal was completing service his crew waved him out. At the same moment, the fueler inexplicably re-inserted the fuel hose while Rahal was taking off. This resulted in the hose being torn and the nozzle still attached to the car when Rahal entered the track. The nozzle eventually worked loose and deposited itself on the racing surface bringing out the caution.

One would expect a drive-through penalty for such an infraction, but, for reasons I cannot fully comprehend, IndyCar opted not to issue a penalty on the track. Certainly, there will be a fine of some sort when the Tuesday afternoon penalty press release is issued.

With Rahal and Andretti on the podium, it was a great day for Honda as they were every bit the equal of Chevrolet in this particular configuration. Honda drivers, Takuma Sato, Carlos Munoz, Ryan Hunter-Reay and Ryan Briscoe all took turns at the front going toe-to-toe with the Chevy cars.

There were two major incidents in the closing laps of the race that put the spotlight on the inherent danger involved in the pack racing. Takuma Sato found his car loose as he was bottled up between Scott Dixon and Power. Contact with Dixon put Sato into Power, taking both cars out.

On the final lap, Ryan Hunter-Reay and Ryan Briscoe touched and took to the grass as Briscoe’s car became airborne and landed nose-first into the turf.

Thankfully, none of the drivers were injured, but there were mixed sentiments from the drivers.

This is crazy, crazy, crazy” said Will Power, “When you have a pack race like what we had today, you have to take a lot of risks to gain track position. As exciting as it is, it’s intense at the same time. I’m just glad that no one got hurt out there and that everybody is OK.”

“I’ll be honest, I am not a fan of this kind of racing. We don’t need to run in a pack at over 220 mph.” said Simon Pagenaud. “It is just not safe racing. That is my personal opinion.”

Marco Andretti added “You’ve got guys that just don’t want to back off, guys going forward, guys going backward, inside, outside. I find it quite fun but it is extremely dangerous, but that’s what we sign up for. We put on a heck of a show for the fans, that’s for sure.”

“That was one of the most nerve-racking races I’ve ever been a part of, but I can’t be too upset with a podium finish” said Tony Kanaan.

The racing was indeed exciting, perhaps one of the most exciting IndyCar races of all time, but the lingering question of the lack of attendance at Auto Club Speedway must be addressed. Four different dates in as many years is no way to build a following, and a Saturday afternoon in heat of June is certainly not the answer

The promoters are big fans of Indycar racing, and would love to see the event continue. They would like a September date, after Labor Day while Mark Miles seems dead set on ending the season prior to that. Keep your eye on this developing story.

With the win, Graham Rahal become the eighth different winner in 2015, and moves to the fourth spot in the season standings. Juan Pablo Montoya remains atop the standings with a 46 point advantage over Will Power.

The next stop for the Verizon IndyCar Series will be at the historic Milwaukee Mile in a weeks time.