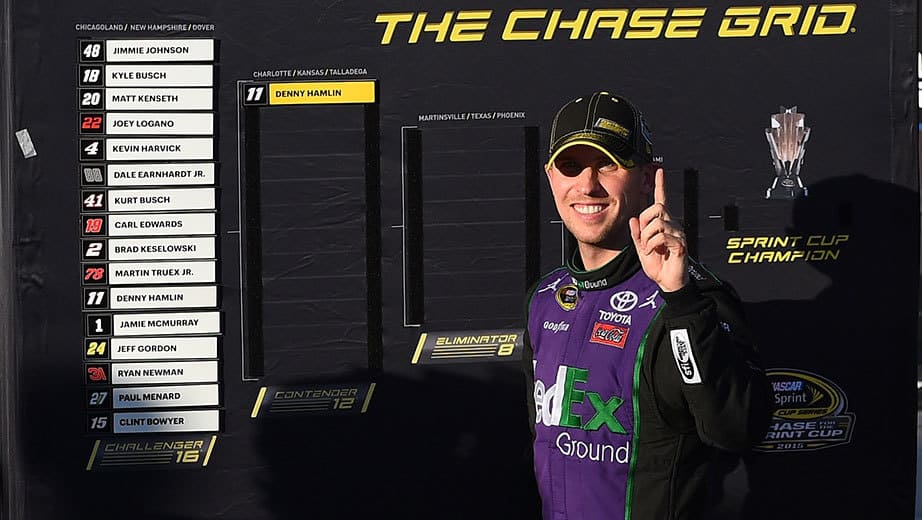 It’s Tuesday afternoon, and there is still buzz surrounding the first race of the NASCAR Chase for the Sprint Cup. It was Joe Gibbs Racing’s Denny Hamlin who pulled off an upset, staying out during a late caution, gaining track position and taking a win away from Kurt Busch.

An elated Hamlin pulled into victory lane, while the elder Busch brother didn’t seem too awful disappointed with his eventual third place finish. However, back behind the garage area, it was the driver that finished 42nd that was about to make headlines.

Defending Series Champion, Kevin Harvick, was a victim of contact from Jimmie Johnson on a restart. The domino effect caused Harvick’s tire to blow sending him into the wall, and then behind the pit wall for lengthy repairs that cost him eleven spots in the Chase standings.

Following the race, Johnson sought out Harvick to discuss the issue. Harvick greeted him with a punch to the chest and some words that television audio was not close enough to capture. Suffice to say, some of those words were probably not appropriate for network TV anyway.

NASCAR concocted the playoff-style elimination-format Chase last season to generate headlines, drama and excitement to their sport. It worked like a charm last year, as we saw several post-race scuffles, including one at Texas involving Jeff Gordon and Brad Keselowski. It was Kevin Harvick who was instrumental in escalating a conversation into a brawl by shoving Keselowski into Gordon.

This act quickly became known as “Harvicking” generating its own hashtag, facebook page and entry into the urban dictionary.

So, the long and short of it is, while the Chase Format is certainly doing its job of creating drama and headlines, is it healthy for a sport to have its star athletes behaving like bullies on the elementary school playground?

In a word, yes. NASCAR confirmed that they will not issue any penalties, and I’m sure that the marketing gurus in the boardroom are quietly smiling as the incident continues to generate buzz throughout the media.

What we are seeing is the blowing off of steam following a high pressure situation. With the elimination-format Chase still in its infancy, purists are still arguing about the validity of a format that essentially ends a driver’s season prematurely if he fails to make the cut.

Sure, its fairly new to racing, but it has worked well for football fans for decades. Once the playoffs begin, nothing previous matters and the season comes down to that one game, that one fumble, that one penalty, that one missed field goal, or any other number of contributing factors that will end a season.

Now, I’m no football statistician, but I’m sure that you will find that there are more penalties an scuffles in a playoff game than we may see during the regular season.

It is a pressure-cooker situation for the players and coaches, and we are seeing the same thing here in NASCAR.

For the drivers in the Chase, there are four instances where an entire season comes down to one race, and it becomes a do-or-die situation. With everything on the line, and drivers full of adrenaline after racing hard for three to four hours, emotions are sure to run high.

The little scuffle between Harvick and Johnson in Chicago likely will not be the last post-race drama of the 2015 Chase.

The Chase continues next week at the New Hampshire Speedway. I’ll be watching…