Welcome to Drafting The Circuits -
Home : Blogs : A Look Back: Forty Plus Years of Action at Long Beach 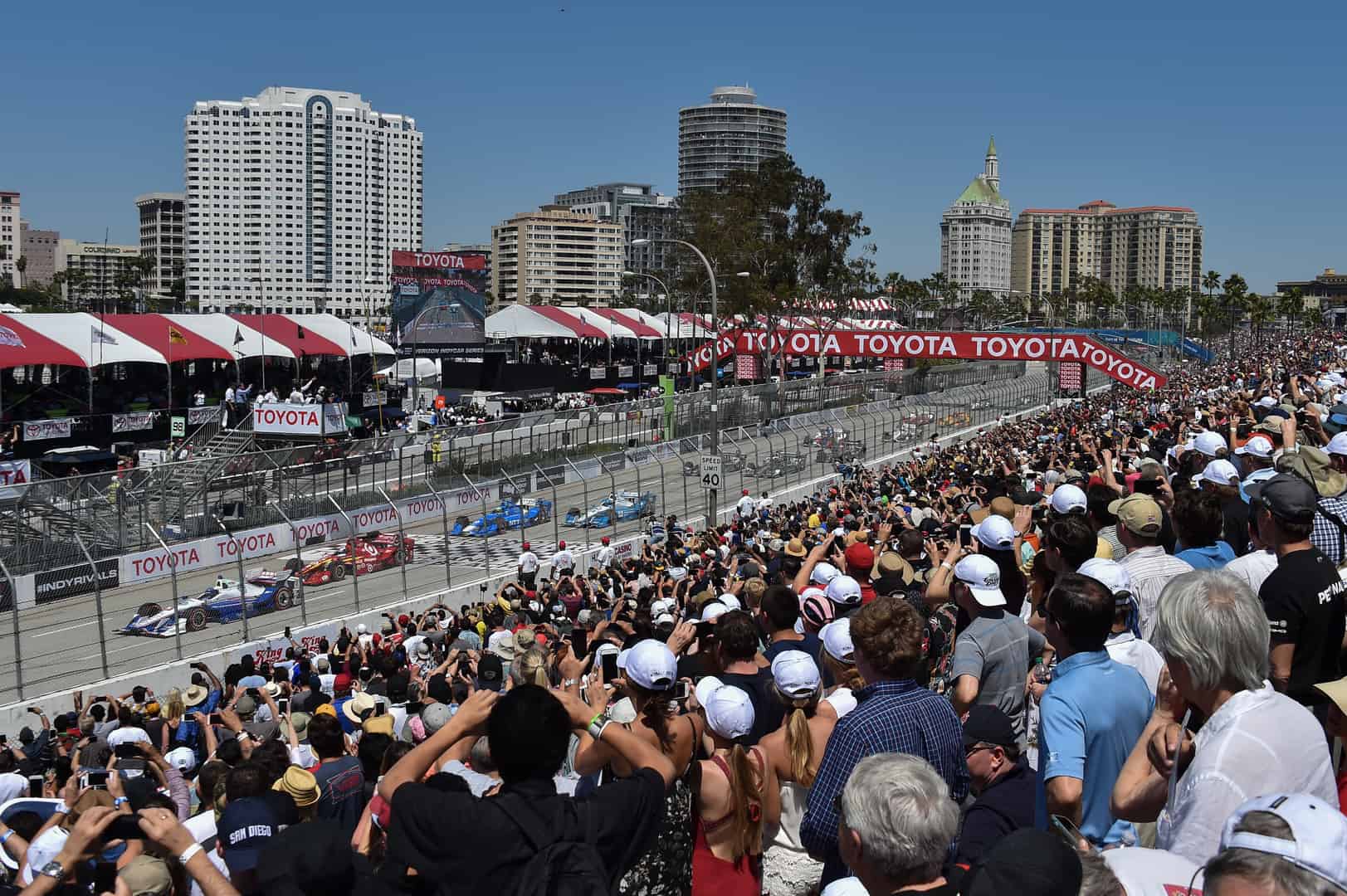 A Look Back: Forty Plus Years of Action at Long Beach

As the longest continuously running street race in North America, the Grand Prix of Long Beach is certainly a crown jewel event on the IndyCar schedule. In terms of prestige, a Long Beach win is second only to the Indianapolis 500 for the IndyCar drivers. Let’s take a look back at how one man’s vision has grown into one of the most durable events in all of Motorsport.

The Grand Prix of Long Beach was the brainchild of race promoter Chris Pook. He designed the event with the goal of bringing Formula One to the USA’s West coast. California hosted the Grand Prix cars at Riverside in 1960, and the Ontario Motor Speedway had hosted a non-championship exhibition race in 1971, but Pook dreamt of giving it a permanent home.

The inaugural race at Long Beach was a Formula 5000 race, sanctioned by the SCCA, as an audition for Formula One in 1975. With a crowd of just under 50,000 on hand, the FIA was satisfied that Long Beach could handle Formula one. Six months later, The Grand Prix cars arrived and the United States Grand Prix West was born.

On race day, March 28, 1976, Clay Regazzoni won from pole leading a Ferrari 1-2 finish. Pook was thrilled with the event, but the cost of staging the two races just six months apart had put him in a financial hole. He needed nothing short of a miracle for 1977.

Enter Mario Andretti. In 1977, Team Lotus has introduced the first ground-effects car to the series, and the tight turns of the beachfront circuit suited the car to a tee. Andretti, one of two American drivers entered in the race, started second, but dropped to third at the start. With Jody Scheckter and Niki Lauda ahead of him, he fought hard to get to the front.

He dispensed with Lauda, and began a race-long battle with Scheckter that culminated in Andretti grabbing the lead with just three laps to go. Being the first American to win an F-1 race on American soil, news of Andretti’s victory spread like wildfire through the mainstream media.

To this day, Mario Andretti still lights up with emotion when discussing this race, and considers Long Beach 1977 as the most satisfying win of his storied career. For Chris Pook and the Long Beach Grand Prix Association, Andretti’s magical day solidly cemented Long Beach’s place in Motorsport.

Formula One continued to race at Long Beach for the next several seasons with Carlos Reutemann, Gilles Villeneuve, Nelson Piquet, Alan Jones and Niki Lauda joining the list of Long Beach winners. A favorite with drivers, some referred to the Grand Prix as the U.S. version of Monaco.

Despite the positive press, and the global interest that the event brought to the City, the rising costs became problematic. When the circus arrived for the 1983 running, rumors were spreading that it would be the last F-1 race in Long Beach. The rumors were indeed true, as Pook had made plans to bring the CART Series to Long Beach in 1984.

West coast fans in 1983 were treated to a memorable race where John Watson took a spirited drive towards the front after starting 22nd. Watson was able to take his McLaren into the lead and hold on for the win, giving the Long Beach fans a fitting farewell.

Some were concerned that replacing the F1 cars with their CART counterparts would tarnish the luster of the event, but the race did not miss a beat. It was Mario Andretti, who had retired from F1 and returned to IndyCars, to the rescue once again as he won in both 1984 and 1985. The CART Series, that had emerged in 1979 out of a split with USAC, was gaining momentum and adding Long Beach to its calendar was a huge bonus.

Michael Andretti took his first IndyCar win on the streets of Long Beach in 1986, and fittingly, he would bookend his driving career by taking his 42nd and final win at Long Beach in 2002. Mario returned to the top step of the podium in 1987, completing four years of Andretti domination, but the true King of the Beach had yet to be crowned.

Al Unser Jr. took four consecutive wins on the circuit from 1988 through 1991, and added two more wins in 1994 and 1995. The wins were not without drama, as Unser literally punted an unsuspecting Mario Andretti out of the lead in 1989. Snapping off his own front wing in the process, Little Al held on for the win only to be greeted by an angry Mario Andretti in victory lane. The unpleasant exchange captured on live television added fuel to the on again/off again Unser-Andretti feud.

Unser’s six wins have not been equaled to this day, although Paul Tracy (4 wins) and Sebastien Bourdais (3 wins) have certainly proven that they have mastered the tricky street course. The Long Beach Grand Prix remained with the CART series during the open wheel split of 1996, and continued to flourish with names like Jimmy Vasser, Alex Zanardi, Juan Pablo Montoya and Helio Castroneves being added to the list of winners.

When CART fell into bankruptcy in 2004, and its assets were taken over by OWRS, the newly-branded ChampCar Series held their first sanctioned event in Long Beach with Paul Tracy taking the win. In another bookend situation, Long Beach would also host the final race sanctioned by ChampCar.

With reunification announced for 2008, a schedule conflict with Motegi allowed the ChampCars to run on their own one last time. The final weekend with a split series began with the IRL running at Motegi, and ended with Will Power taking an emotional win in Long Beach. From there, we bid a fond farewell to ChampCar and the healing began.

Long Beach was welcomed with open arms by the current series in 2009, and has remained on the schedule ever since. In recent years, fans have been treated to a surprise win from the relatively unknown Mike Conway in 2010, the first ever IndyCar race win by an Asian-born driver with Takuma Sato in 2013, and seeing Scott Dixon finally add a Long Beach win to his already impressive resume in 2015.

The weekend of April 7-9 will see another chapter unfold in the history of the Toyota Grand Prix of Long Beach. Perhaps Simon Pagenaud will come home victorious in the Penske car as he did one year ago. Perhaps Sebastien Bourdais can go two in a row in 2017 and add a fourth Long Beach trophy to his display case. Maybe Marco Andretti can become the first third-generation winner, or we may even see a new face in victory lane.

One thing is certain, you won’t want to miss it.