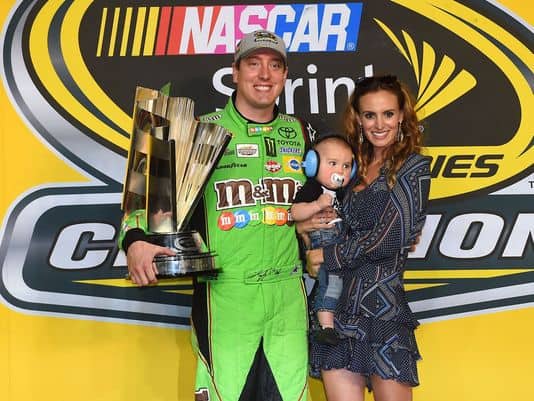 For many loyal and adoring “Rowdy” Busch fans, this was an inevitable and sweet victory. Busch has been racing in NASCAR’s top series since 2004 and had accumulated 33 series wins before last night’s victory. But the coveted Cup was always largely out of reach before this season.

Busch was no stranger to making the NASCAR Sprint Cup Chase, the “playoffs” instituted in 2004. He had seven appearances total including this year. But the closest Busch ever got to winning was a fourth place in 2013. Usually the dazzling Busch would languish in the Chase.

All of that changed this year.

And what an odd year it was for Busch.

In NASCAR’s opening weekend in February at Daytona International Speedway, Busch suffered serious leg injuries during the Xfinity series race the day before the Daytona 500. He was unable to compete in the Daytona 500 and 10 subsequent races having to undergo surgeries and rehabilitation to fix his legs.

In late May Busch resurfaced and gingerly strapped into his race car. NASCAR issued a waiver allowing him to race for the championship if he secured a place in the Chase.

By late June Busch earned a “W” at Sonoma.  In the month of July he won three back-to-back-to-back races at Kentucky, Loudon, and Indianapolis. He and the No. 18 team fought hard to win the points and victories to earn a spot in the Chase.

Each level of the Chase Busch got through. He was as strong as he’d ever been in the late stages of the marathon NASCAR season.

At Homestead-Miami Speedway it was down to four drivers: the 2014 Sprint Cup champion Kevin Harvick, the nice guy driver Martin Truex Jr., and superstar driver Jeff Gordon who had announced 2015 as his last full year of Sprint Cup competition, and Busch.

On Friday night Busch and his wife Samantha were crowned champions as team owners of Kyle Busch Motorsports in the NASCAR Camping World Truck Series, it was their third victory in a row of that sort. This year their driver Erik Jones captured the championship.

The only other championship Busch had won previous to 2015 was as a driver in the Xfinity series in 2009.

Before 2015 Busch was criticized for being a “punk”, having a bad temper that played itself out on the racetrack, and for off racetrack antics. Many labeled him one of NASCAR’s bad boys.

Marriage to Samantha in 2010 seemed to tame him but not until this season with the accident and the birth of the couple’s first child, a son named Brexton, did Busch seem to truly change for the better.

Busch has truly earned this spot in NASCAR’s history with this championship.

For those unwilling to accept Busch based on past behaviors, his team’s car manufacturer, or any other reason, I offer the following:

Toyota is here to stay.

His personality change was evident. Having the accident in February, rehabbing after surgeries, and becoming a father transformed Busch.