Welcome to Drafting The Circuits -
Home : Blogs : IndyCars to Invade the South this Weekend 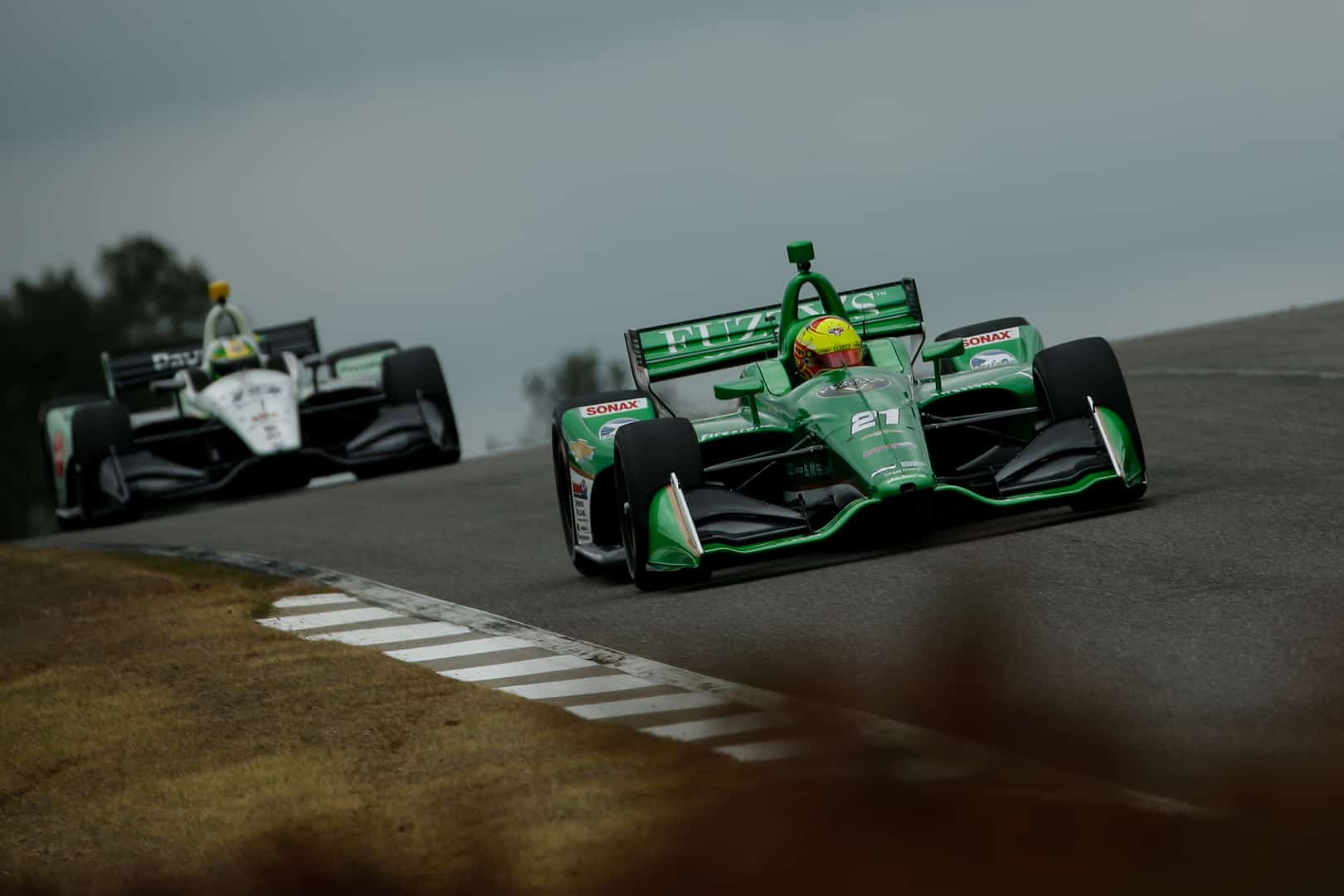 IndyCars to Invade the South this Weekend

The latest iteration of the Verizon IndyCar Series’ venerable Dallara chassis, the IR-18, was a success on the streets of St. Petersburg and Long Beach while producing mixed reviews on the short oval at Phoenix. This weekend, fans will have their first opportunity to see the new car run on a natural terrain road course in race conditions.

The Honda Indy Grand Prix of Alabama will take place this weekend, April 20-22, at the Barber Motorsports Park. The race will be round four of seventeen in 2018, and the first of six races to be contested on permanent road courses. The Global MX-5 Cup cars, Pro Mazda and Indy Lights will also be in action over the weekend.

The Honda Indy Grand Prix will consist of 90 laps with a race distance of 214.2 miles.

Having opened in 2003, Barber Motorsports Park is a purpose-built natural terrain road course built on 740 acres in suburban Birmingham, Alabama. The course was designed by Alan Wilson, and it winds over rolling green hills and through beautiful wooded areas. The multi-purpose facility features cut-off areas that allow a number of different configurations for club racing and test sessions.

The 2.38-mile road course has 17 turns and features 80 feet of elevation change that challenge drivers and engineers. The track maintains a consistent, but relatively narrow, 45-foot width the entire lap around. With the track having been originally designed to host motorcycle racing, the IndyCar drivers must execute a great deal of patience and care while overtaking.

The grounds are also the home of the Barber Vintage Motorsport Museum, which boasts a collection of nearly 1500 vintage and modern cars and motorcycles.

Another of the unique features you will find at Barber are a collection of odd and interesting sculptures adorning the hillsides. The artwork on display features giant spiders and scorpions, Greek gods and goddesses, lions, fireflies and armadillos.

Barber Motorsports Park first began its association with the IndyCar Series in 2007, with teams utilizing the track for pre-season testing. A three-day Spring Training test session event was held at the facility in 2009, and it proved to be an overwhelming success.

The course was granted a date on the 2010 schedule, at it has remained a favorite of both fans and drivers. 2018 will mark the ninth annual running of the event. The race weekend draws a large crowd that are both knowledgeable and enthusiastic about IndyCar racing, despite being smack-dab in the center of NASCAR country.

The inaugural run was won by by Helio Castroneves for Team Penske. For the popular driver, it was a landmark victory that saw him surpass Emerson Fittipaldi as the winningest Brazilian driver in IndyCar racing.

Penske remained dominant at the track for the next two years with Will Power taking back-to-back wins. Ryan Hunter-Reay, with Andretti Autosport, repeated the back-to-back feat in 2013-14.

2015’s win by Josef Newgarden was tremendously popular with the fans. Not only is he a charismatic driver, but he was raised in the American South. Hailing from Hendersonville, TN, Barber is the closest thing he has to a home Grand Prix. Newgarden repeated at Barber in 2017 as a Penske driver en route to the season championship.

With the new car and its lower downforce package, new teams and drivers on the grid, and some old faces in new places, its anybody’s guess who will win on Sunday. The first three races of 2018 have produced three different winners from three different teams.

With that being said, both Alexander Rossi (Andretti Autosport) and Sebastien Bourdais (Dale Coyne Racing) have been in the mix in all three races and can be considered contenders for the Barber win. Rossi is currently leading the points, but Bourdais could easily be leading had it not been for a pit-lane miscue at Phoenix and a series of unfortunate events at Long Beach.

Given the strength that Rossi has shown, one also has to take a look at his teammate, Ryan Hunter-Reay, as a possible Barber winner. Hunter-Reay has two past wins in Alabama, and he showed some great speed at Long Beach. The 2012 season champion has been held winless since Pocono 2015, so he is eager to visit Victory Lane again.

Robert Wickens (Schmidt-Peterson Racing) who nearly stole at St. Pete and Phoenix, should find that the Barber layout falls right in his wheelhouse. Graham Rahal (Rahal/Letterman/Lanigan) will also be one to keep an eye on, looking for his first win of the season, as is Tony Kanaan, who is now with the A.J. Foyt team.

Scott Dixon, the four-time champion, has never won at Barber, but he has stood on the podium in Alabama more than any other driver. His Ganassi Racing teammate, Ed Jones, is coming off of a fine run at Long Beach, and both should be strong this weekend.

Of course, the smart money is still on the Penske cars. All three of Team Penske’s drivers are former Barber winners, with Josef Newgarden entering the weekend as the defending race winner.

Among the keys to winning at Barber will be qualifying well, as the race has never produced a winner that has started outside of the top ten. From there, keeping your nose clean, managing the strategy, and praying that the cautions down catch you out will be paramount to a successful weekend.

Tickets for the Honda Indy Grand Prix of Alabama can be purchased here. Ticket prices range from $39 for a single-day general admission up to $435.00 for a three-day VIP package featuring Cochina at the Track with plenty of options in between, including garage passes and museum tickets. Children under 15 are fee with a paying adult.

Television coverage of qualifying and the race will be provided by NBC-SN and CNBC.  Race coverage will begin at 2:00 PM EDT on Sunday April 22.  Coverage can also be found streaming on the Verizon IndyCar Series You Tube Channel, Facebook Page or at http://racecontrol.indycar.com/

Other coverage options include Sirius XM radio (Sirius:209, XM:212). Fans can also keep up with all of the action on the IndyCar Mobile app provided by Verizon Communications.