Welcome to Drafting The Circuits -
Home : Blogs : IndyCars Invade the South This Weekend 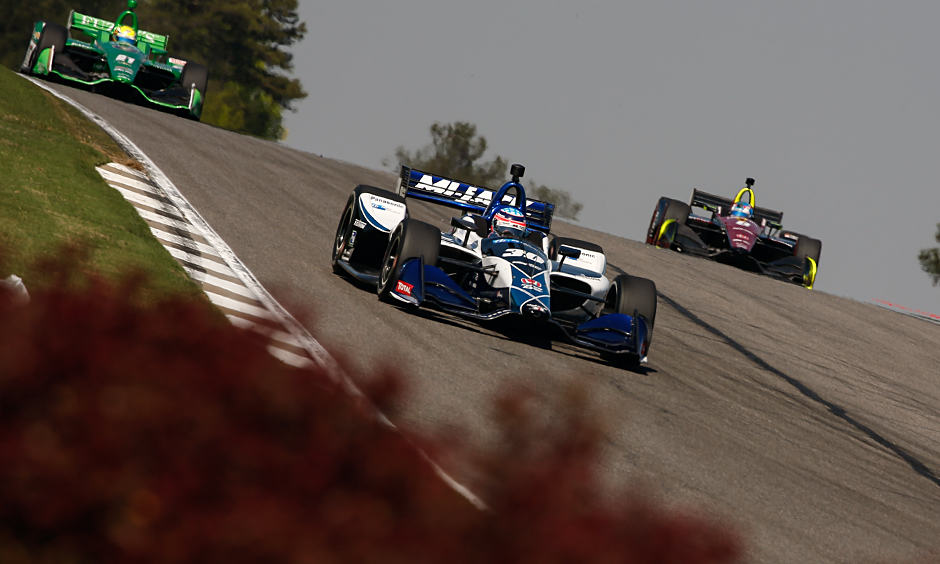 IndyCars Invade the South This Weekend

This coming weekend the Verizon IndyCar Series will invade the deep South for the Honda Indy Grand Prix of Alabama. The race is slated for April 5-7, 2019.

The Honda Indy Grand Prix of Alabama is round three of seventeen for the Verizon IndyCar Series in 2019. The event is held on a permanent road course, the second of seven such races on the calendar.

The defending race winner is Josef Newgarden, who drives the No.2  Fitzgerald Glider Kits Chevrolet for Team Penske. The 2018 win was his second consecutive victory at Barber, and his third overall. The Grand Prix of Alabama was also the site of Newgarden’s first series win in 2015. As a native of nearby Tennessee, the driver considers this his home Grand Prix.

Having opened in 2003, Barber Motorsports Park is a purpose-built natural terrain road course built on 740 acres in suburban Birmingham, Alabama. The course was designed by Alan Wilson, and it winds over rolling green hills and through beautiful wooded areas.  The multi-purpose facility features cut-off areas that allow a number of different configurations for club racing and test sessions.

The 2.38-mile road course has 17 turns and features 80 feet of elevation change that challenge drivers and engineers. The track maintains a consistent 45-foot width the entire lap around.

The grounds are also the home of the Barber Vintage Motorsport Museum, which boasts a collection of nearly 1500 vintage and modern cars and motorcycles.

Another of the unique features you will find at Barber are a collection of odd and interesting sculptures adorning the hillsides.  The artwork on display features giant spiders and scorpions, Greek gods and goddesses, lions, fireflies and armadillos.

Barber Motorsports Park first began its association with the IndyCar Series in 2007, with teams utilizing the track for pre-season testing. A three-day Spring Training test session event was held at the facility in 2009, and it proved to be an overwhelming success.

The course was granted a date on the 2010 schedule, at it has remained a favorite of both fans and drivers. 2019 will mark the tenth annual running of the event. The race weekend draws a large crowd that are both knowledgeable and enthusiastic about IndyCar racing, despite being smack-dab in the center of NASCAR country.

The inaugural run was won by by Team Penske’s Helio Castroneves. For the popular driver, it was a landmark victory that saw him surpass Emerson Fittipaldi as the winningest Brazilian driver in IndyCar racing.

Penske remained dominant at the track for the next two years with Will Power taking back-to-back wins. Ryan Hunter-Reay, with Andretti Autosport, repeated the back-to-back feat in 2013-14.

2015’s win by Josef Newgarden was tremendously popular with the fans, and cemented him as the favorite among those that attend. Simon Pagenaud captured the 2016 win en route to the championship, and Newgarden has taken that last two.

The 2019 NTT IndyCar Series Field represents one of the strongest, talent-packed top-to-bottom lineups in all of racing.

24 drivers will take the green flag in Alabama. Of those, four are former winners at at the venue. Newgarden, Will Power, and Ryan Hunter Reay have two wins apiece, and Simon Pagenaud has one.

The 20 drivers running the full schedule will be joined by part-timers Pato O’ Ward, Ben Hanley, Jack Harvey and Ed Jones, who splits seat time in the No. 20 car with team owner, Ed Carpenter.

The most recent winner in the Series is second-generation driver Colton Herta. The rookie driver made history two weeks ago in Austin becoming the youngest IndyCar winner ever. This win was also the first for his team, Harding Steinbrenner Racing. The Indianapolis-based team runs a Honda-powered entry, and has a technical alliance with Andretti Autosport.

Scott Dixon, who drives the PNC Bank Honda for Chip Ganassi Racing, is the reigning Series Champion. A native of New Zealand, Dixon is a five-time Series Champion, an Indy 500 winner and the subject of the motion picture, Born Racer.  His career statistics see him trailing only A.J. Foyt and Mario Andretti on the all-time win list. A win at Barber Motorsports Park has, however, eluded him thus far.

Thirteen of the entered drivers are IndyCar race winners, seven have won championships in IndyCar or CART/Champcar, and six are Indy 500 winners. Rookies in the field at Barber will include Americans Colton Herta and Santino Ferrucci, Swedish drivers, Marcus Ericsson and Felix Rosenqvist, British driver, Ben Hanley and Pato O’ Ward, who hails from Mexico.

The current NTT IndyCar Series was born out of the Indy Racing League, which absorbed the rival ChampCar World Series in 2008. In the years since the reunification, the series has seen steady growth in attendance and television ratings. For 2019, the Series announced that all of its US television broadcasts will be provided by NBC-TV, adding consistency to the coverage that was formerly shared between NBC and ABC/ESPN.

The positive growth in recent years bodes well for the Series that is owned by Hulman and Company. The centerpiece of the series is the Indianapolis 500, which will run for the 103st time in May. Mark Miles is the Chief Executive of Hulman and Company, and Jay Frye is the President of Indycar.

Teams in the NTT IndyCar Series use a common chassis, produced by Dallara, while Chevrolet and Honda are the engine partners. Each supplies a 2.2 Liter V-6 turbocharged engine that is capable of producing over 700 hp at 12200 rpm. All cars in the series run Firestone Firehawk tires.

Tickets for the Honda Grand Prix of Alabama can be purchased here. Ticket prices range from $15 for a Friday general admission up to $69.00 for a three-day GA ticket.

Television coverage will be provided by NBC-SN.  Race coverage will begin at 3:30 pm EDT on Sunday April 7. Additional coverage of the weekend action, including all practice and qualifying sessions will be available with the  NBC Sports Gold IndyCar Pass.

Other coverage options include Sirius XM radio (Sirius:209, XM:212). Fans can also keep up with all of the action on the IndyCar Mobile app.