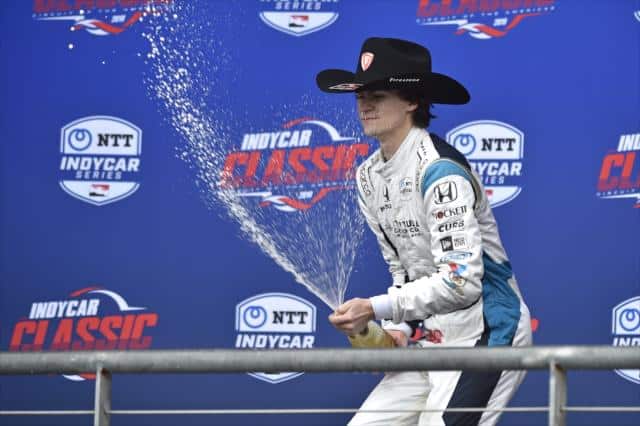 AUSTIN, Texas – If Sunday’s IndyCar Classic at Circuit of The Americas is any indication, it’s going to be a fun season ahead with the stout crop of rookies that are in the NTT IndyCar Series field. Two of the five rookies finished in the top-10, but at portions of the race all of them were fighting for a spot on the top half of the leaderboard.

Colton Herta, the 18-year old standout for Harding Stenbrenner Racing, won the day by capturing his first career IndyCar win in only his third start.

Though the day ended in victory, Herta and his HSR team had their work cut out for them to be able to make it happen. After setting the second fastest time in the first practice of the weekend, the engine on his No. 88 Honda let go, forcing his team to have to work overtime in an effort to get it changed and get back on track.

The lengthy engine replacement process would cause the team to miss the second practice of the day and they wouldn’t be able to get back out and run some laps until the following day. Despite the setback, Herta went out and made the Firestone Fast Six during qualifying and eventually clocked in with a time good enough to give him the fourth-place spot on the grid.

Once the race began, the No. 88 team seemed destined for a third-place finish with Will Power and Alexander Rossi keeping a stranglehold on the top-two spots for nearly the entirety of the race. Then came a caution on lap 44, which caused Power and Rossi to have to make their pit stops and left Herta in the catbird seat having inherited the lead.

From there it was all Herta as he was able to lead the final 15 laps en route to the win. In addition to the win, he also earned the distinction of becoming the youngest winner in series history, eclipsing the record previously held by Graham Rahal.

“Just to be up with the names of people that have won this race, I’m going to live and die an IndyCar winner, which is spectacular in itself,” said Herta. “It’s a great record at a young age. To be standing up here kind of feels surreal.

“I’ve been bit by the bug now. One race isn’t enough. Going to go for another one at Barber. Just want to get there and drive again.”

Along with Herta taking the victory, his championship rival from last season in Indy Lights, Patricio O’Ward, also impressed in his season debut with an eighth-place run of his own. O’Ward had been scheduled to be Herta’s teammate for the season before his ride fell through and he joined forces with Carlin on a part-time basis in 2019.

O’Ward, who hails from Mexico, but resides in San Antonio, Texas, which is a short drive from Circuit of The Americas, wanted nothing more than to give the fans in his adopted state a thrilling run.

Starting the day in eighth-place, O’Ward showed off his driving skills throughout the day, making jaw dropping moves on some of the veterans in the series, including Rahal, who he staged an exhilarating battle with mid-race.

His battles with the veterans may have been one of the highlights of the race, but he also was able to keep his car in one piece as the race played out, fighting for a finish inside the top-five before falling to eighth by the time the checkered flag flew due to having to save fuel to be able to make it to the end.

While he was disappointed that he lost a few positions in the waning laps, O’Ward noted after the race that he was still thrilled with the end result.

“I haven’t had so much fun in a while, to be honest,” O’Ward said. “I’m so bummed I had to save fuel in the end because I know I had a podium or a top five car. I had the pace, I had the experience to know where I had the speed to pass.

“It’s just impossible to attack or even defend whenever you’re saving so much fuel but I’m super happy for the team, we did a really good job I think for a first solid time out and we’re looking forward to the next time. We just need to learn to manage the race a little bit better and we’re going to be right on pace next time.”

As for the remaining rookies, Marcus Ericsson looked to be headed toward a top-10, or even a top-five finish himself before a penalty for an unsafe release on pit road bit him and the team at lap 50, dropping him to the tail end of the field for the ensuing restart. Over the final laps of the race, he was only able to get back up to 15th by the end of the event.

“It was very unfortunate on the last pit stop that we had traffic there on pit lane and had an issue which picked us up a penalty which was extremely frustrating,” said Ericsson.  “Because at the last restart, being P5 with good tires, I think a podium was in the cards with the pace that we had. So even fifth, where we were running, would’ve been an amazing result considering where we started the race.

“I think we have a lot of things that we are very happy and proud of, but of course it’s extremely frustrating that the second weekend in a row we have the pace and the Arrow car to be in the top five, or better, and we got away with almost nothing. We need to sort that out but we have a lot of positives as well. From a personal side, it was one of my best races of my career I think, so I’m very proud of that and I’ll be ready for the next one.”

Santino Ferrucci ran as high as seventh in the race before getting forced off track, causing him to hit one of the curbs on the exit of the turn, which sent his car airborne for a second, eventually breaking suspension pieces on rear of his Honda. As a result, he would only be able to manage a 20th place finish.

“We had a really good start and worked our way up to ninth,” said Ferrucci. “The first stint was really, really solid, the car was really good, and we were able to hold our ground. In the second stint, on Firestone Reds, there was a lot of fighting and I killed the tires a little bit too soon.

“I was just trying to hang on and survive but then once we put on the Black tires, unfortunately we got forced off track and hit one of the ‘baguette curbs’ in Turn 12 and we blew up both rear dampers and that was basically it for us. The guys did a good job replacing the broken dampers, so we could go back out and finish the race on the lead lap but now we’re looking forward to the next one.”

Last, but not least is standout Felix Rosenqvist, who also had his moments in the top-10 during the 60-lap race, but met an early end on lap 44 when he and James Hinchcliffe collided off of Turn 19, sending the Swede spinning into the inside wall just before pit entry and causing major damage to the front end of his No. 10 Honda. Rosenqvist would end the day five laps off the pace in 23rd.

“We had good speed in the NTT DATA car and we just couldn’t get where we needed to in the race,” said Rosenqvist. “I made a mistake and spun which didn’t help. Then (James) Hinchcliffe and I got together and I got knocked out. I’m not sure what happened exactly, but I’ll have to look at the replay. But there were things I learned for sure and we’ll come back stronger at (Barber).”