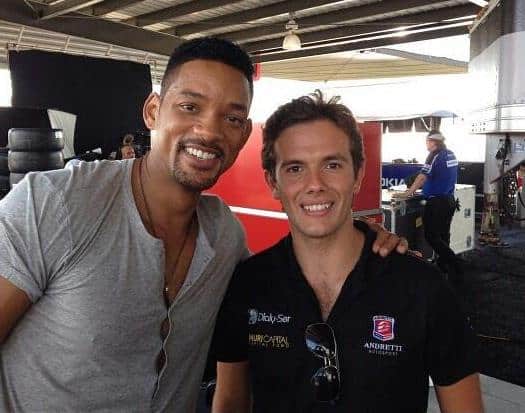 When Carlos Munoz was a young boy, racing go-karts in his native Colombia, I am certain that he had big dreams about where his racing career might take him. He probably entertained thoughts of competing at the highest level in places like Indianapolis, Monaco, Le Mans or Daytona.

The thought probably never entered his mind that his interest in racing would one day lead him to the silver screen, making his motion picture debut in a film starring Will Smith.

However, that is exactly the scenario that Munoz will find himself in when the Warner Brother’s motion picture Focus is released in theaters on February 27.

Munoz will be seen in the film doing what he does best, that is driving an Indycar.  Providing the cars, crew and equipment for the motion picture production was Bryan Herta Autosport. Team principle, Bryan Herta, will also be seen behind the wheel of a DW-12 in the film. When a few of the other drivers that were contacted had conflicts with the production schedule, Herta happily jumped back in the cockpit for the first time since 2006.

“Obviously, movie driving is a little different than racing, but it was still good to get out there and feel the downforce, the power and all those sensations again,” said Herta. “I think the contract said we couldn’t go over 100mph. I’m not going to say we didn’t, though.”

The scenes featuring the IndyCars were filmed at NOLA Motorsports Park in suburban New Orleans. NOLA will host the Verizon IndyCar series on April 12th for the inaugural Grand Prix of Louisana.

Obviously, having the Verizon IndyCars featured in a major motion picture is a positive publicity boost for the series.

“Aligning the stars and cars of the Verizon IndyCar Series with the stars of a major motion picture like Focus made a lot of sense to us,” said Mark Miles, IndyCar CEO. “Warner Bros. and the entire Focus production staff have been great partners throughout this process, and we look forward to positioning our brand with more of these opportunities in the future.”

Meanwhile, in series news, Dale Coyne Racing arrived at Sebring this week with Carlos Huertas and Rodolfo Gonzales. With two seats and no confirmed drivers, this is the first time the Coyne operation has hit the test track this off-season.

Huertas drove for Dale Coyne in 2014, and brought the team a win in Houston. Provided he is again able to secure sponsorship, he may be a lock for the second seat.

Gonzalez, a former GP2 driver who hails from Venezuela, has previously tested for Schmidt-Peterson Motorsport and with Coyne in 2014.

Noticeably absent was Alexander Rossi, a name that has been mentioned in conjunction with the Dale Coyne ride more than a few times.

KVSH racing was also on hand at Sebring with primary driver, Sebastien Bourdais.  Along for the ride was Ryan Phinny who tested an IndyCar for the first time with the team.

Phinny, a California native, is enthusiastic, but a bit light on experience. The former Formula BMW-USA driver has started in six Indy Lights races, with a career high finish of sixth.

At the same time, the 25 year old told the press that he does not feel that he is not in over his head.

Phinny’s greatest asset may be his connection to Casamigos, an American Tequila company that is owned, in part, by actor George Clooney. The small distiller, based in Los Angeles, sees a demographic in IndyCar that fits its product.

While, personally I see a full-time ride for Phinny as a long shot at best, an Indy-only entry is certainly not out of the question. The KVSH team tested Stefano Coletti earlier in the off-season at NOLA Motorsports park with impressive results. A return for Sebastian Saavedra has also not been ruled out entirely. The seat remains open pending a decision by the team.

The open seats are dwindling. Aside from the two Dale Coyne entries and the second KVSH seat, the most attractive open seat, if it comes to fruition, is at Andretti Autosport. The team has been painstakingly working toward putting together the resources for a fourth car, but has been very quiet with any new news.

Several names have been mentioned from veteran Justin Wilson to newcomer Zach Veach. This is indeed a story to watch as the window of opportunity to the season opener gets smaller and smaller.

Schmidt-Peterson Motorsports recently confirmed James Jakes as a teammate to James Hinchcliffe, and CFH Racing announced that Luca Filippi will run the road courses in the #20 car. Gabby Chaves will run the #98 for Bryan Herta Autosport and Sage Karam will occupy the seat in the #8 Chip Ganassi car in the season-opener, and hopefully beyond.

Teams will get their first tests with the new aero kits in Mid March at both NOLA and Barber Motorsport Park. The green flag drops on the 2015 Verizon IndyCar season on March 29 in St. Petersburg.