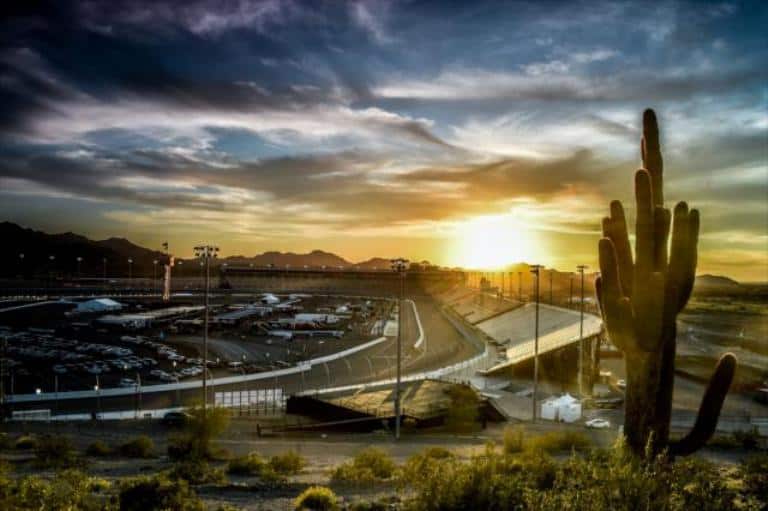 The Verizon IndyCar Series, having completed their season-opening round in St. Petersburg, will travel next to Phoenix for the first oval track race of 2016.

The series will be returning to the one-mile oval in the Valley of the Sun for the first time since 2005. Some of the old-timers have experience racing at Phoenix. Tony Kanaan and Helio Castroneves have both found victory lane on the bullring, albeit prior to its reconfiguration in 2011. For the bulk of the field, however, it is uncharted territory.

All of the teams got some track time at Phoenix in a recent test, but racing conditions are a very different story.

Let’s take a moment to examine six storylines to follow.

There are a couple of drivers in the field who will be experiencing their first oval track race in an Indycar at Phoenix.

Ganassi Racing’s Max Chilton ran at Milwaukee and won at Iowa in an Indy Lights car. However that is the extent of his oval racing experience.

He tested at Phoenix, and that puts him a leg up on Alexander Rossi and Luca Fillipi, both of whom have zero oval track experience.

It will be indeed interesting to see how these drivers will fare in an unfamiliar setting. With the relatively small size of the track and quick lap times, getting through lapped traffic will certainly be a key to success on this track.

Realistically, learning to behave as part of that lapped traffic will be the bigger lesson brought home for these drivers after Phoenix.

Is it Chevy vs. Honda or Penske vs. the World?

A lot is spoken of Chevrolet vs. Honda in IndyCar circles. Certainly, Chevrolet had a distinct advantage last season, especially in qualifying, but Honda did manage six wins to Chevy’s ten.

Chevrolet powered cars captured all 16 pole positions last year, with 13 of those being taken by Penske drivers. Seemingly, a lot of focus is put on counting the number of Chevys vs. Hondas on the top ten of the grid, and Penske has four entries.

That’s four entries from one of the best-funded, most professional organizations in all of motorsport, with plenty of resources to draw on. If you take the Penske cars out of the equation, the numbers are not quite as slanted.

Conversely, I wonder if you slapped a Honda engine in a Penske-prepared car, would the numbers lean the other way?

Phoenix will be the first oval track Chevy-Honda matchup of 2016. While I fully expect Penske to dominate qualifying once again, I wouldn’t count out someone like Ryan Hunter-Reay, Conor Daly, Marco Andretti or even Takuma Sato to have a great run on race day for Honda.

To Pass or Not to Pass

Phoenix is an important market for IndyCar with West coast venues like Las Vegas and Fontana falling off of the calendar in recent years. Providing an entertaining race for the fans will play an important part in the success, or failure, of the event.

A race that becomes a snoozer, with cars running single-file featuring very little passing could be a disaster for future ticket sales.

A race that becomes a mini-pack race, with cars bunched together, unable to gain position might look exciting, but be incredibly tense and potentially dangerous for the drivers.

A race that features cars slicing through traffic, running side-by-side, shuffling positions and ending with a close finish would go a long way towards solidifying the event on the schedule for years to come.

With that being said, opinions are differing on how to accomplish that goal.

Team owner Michael Andretti would like to see more downforce to allow passing. Penske driver Will Power is asking for less downforce, and more horsepower.

Power’s teammate, Juan Montoya has stated that getting through lapped traffic will be the key to success. Scott Dixon, four-time Series Champion, is fine with the package as-is, and states that passing will be difficult, but not impossible.

IndyCar is not planning any changes to the aerodynamic package that was run in testing, so we will see how it plays out on the track.

Team Penske driver, Will Power, enters the season as one of the favorites to win the Championship. This is a familiar position for the Australian driver, having finished in the top four every season dating back to 2010. In 2014, he won the title, and is eager to add a second one to his résumé.

Power was forced to sit out of the season-opener after failing the SCAT (Sports Concussion Assessment Tool). Power had crashed hard in Friday practice, and began exhibiting troublesome symptoms on Saturday following qualifying.

Oriol Servia was drafted on short notice to pilot the Penske car at St. Petersburg.

Further evaluation concluded that Power had not suffered a concussion, but rather was suffering from the lingering effects of an inner ear infection. Power has now been cleared to race.

Will Power left St. Pete having earned one point for capturing pole position, and currently sits 23rd in the championship standings.

The interesting thing here is that, if Team Penske would have withdrawn the qualified car, rather than find a replacement driver, Power would  have been credited with a 22nd place finish, and earned eight more points despite not starting the event.

Obviously, Verizon Communications writes a sizeable check to sponsor two Penske cars. On race day, they have every right to expect to see two Verizon cars on the track

Now, I’m not really big on ‘what-if’ scenarios, but  the fact remains that in three out of the past six seasons, the title has been decided by five or points or less.

In the running for Rookie of the Year honors, young Conor Daly relied on some Dale Coyne pit strategy to pick up the lead at St. Peterburg. He confidently led fifteen laps before being overtaken by eventual race-winner, Juan Pablo Montoya.

The yellows had fallen just right to get him on the same pit sequence as the leaders, and a podium finish looked like a solid possibility.

Daly was clipped by the Andretti Autosport entry of Carlos Munoz exiting the pit lane, forcing another stop for the young American driver to repair damage. He eventually finished an unlucky 13th.

Despite the disappointing result, Daly has shown that he has what it takes to run up front. His engineers praise him for his feedback with the set-up and he shows a maturity in the cockpit well beyond his years.

Heading into Phoenix, keep a close eye on Daly. Mind you, he is a bit light on oval-track experience having only run at Indianapolis in an IndyCar. He does, however, have two oval wins dating back to his days in Star Mazda.

With the Coyne team always willing to bank on race strategy to gain track position, and Daly’s cool-headed approach, they are a serious dark horse.

This past off-season has given both Chevrolet and Honda teams ample time to work on engine development.

While Chevrolet is all-in with their 2016 engine, Honda has opted to hold off a bit before introducing their next-gen engine until the month of May, preferring the reliability of its 2015 power plant for the time being.

Why is this important to mention?

Because during testing at Phoenix, there were two engine failures in Chevrolet-powered cars, both at Team Penske. While Helio Castroneves’ was described as a team-related failure, Will Power experienced a full-on blown engine: an unusual sight in IndyCar this day and age.

Historically, Chevrolet teams seem to find more speed in race conditions than in Spring Training, indicating that they may be sandbagging a little bit, although you will never get a Chevrolet exec to admit to this.

So, if the Chevrolet experienced a failure in a dialed-down situation, what does this mean in full race conditions, with the throttle being held wide open, lap after lap at speeds in the neighborhood of 190 mph?

Might we see more Chevrolet engines expire in a cloud of smoke, as the Honda cars hold together?

Maybe not, Power’s situation might have been an anomaly. However, with only five engines allotted for the season, both Castroneves and Power are now an engine down. If they happen to run through all five engines during the course of the season, it doesn’t mean that they are done for the year.

Installing a sixth engine will, however, cause any further points towards the manufacturers Championship to not be scored.

All engines, both Honda and Chevy, came out of the street race at St. Pete intact. We will have to see if it is a different story at Phoenix.

The Phoenix Grand Prix will take place the weekend of April 1-2. Television coverage will be provided by NBC-SN beginning at 8:30 pm EST on Saturday evening.