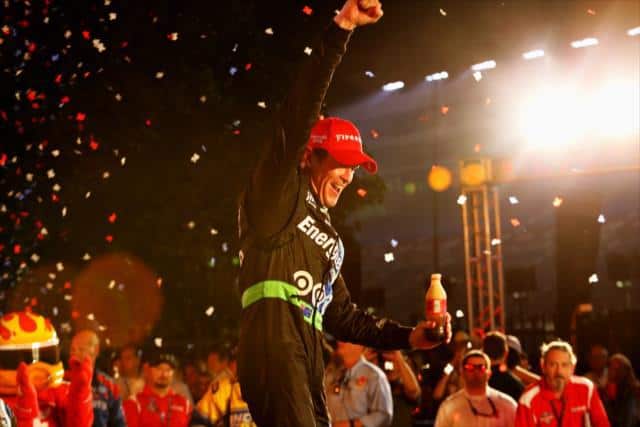 Back in April, I was engaged in a round table conversation with some of my fellow motorsports journalists discussing the Grand Prix of Long Beach.

It was Joey Barnes of Tribute Racing who made the comment, “There’s no such thing as an exciting win by Scott Dixon.”

I pondered that statement for a moment, and then replied. “I guess I’d have to agree. Dixon always makes it look too easy, he reminds me of the Professor, Alain Prost in that respect.”

On Saturday night at the Texas Motor Speedway, Scott Dixon once again made it look easy as he cruised to victory 7.8 seconds ahead of his Ganassi Racing teammate, Tony Kanaan, in the Firestone 600.

With the win, the 37th of his career, Dixon moves to third in the season standings strengthening the argument that he is, perhaps, the finest all-around driver in the Verizon IndyCar Series. With a lack of glitz, glam and hoopla surrounding him, the New Zealand born driver is quietly cementing his place in auto racing history.

Tony Kanaan summed it up best, saying, “Scott is a racer.  As much as he can, he will be out of the spotlight. He is an incredible driver...he’s always going to be the guy.”

“Does he care if people talk about him or not?  Not really,”  Kanaan continued  “Tomorrow morning he’s going to be playing with his kids.  Me and Helio (Castroneves) like to be famous.”

While Dixon certainly made it look easy, behind the scenes it was anything but. The Verzion IndyCar Series arrived at the 1.5 mile oval track with yet another untested modification to the aero-kit. This time, enclosures were added to the rear wheel pods to prevent lift in the event of a car spinning.

They seemed to do their job as Andretti Autosport driver, Ryan Hunter-Reay, spun during practice and stayed on the ground. A few concerns arose as Hunter-Reay was at a loss to explain exactly why his car suddenly spun. The balance of practice

and qualifying went on without incident.

With a few different race-day options to choose from, The Ganassi team opted to use a higher downforce setup than their rivals over at Penske Racing.

The decision initially did not set well with Dixon  who had wanted to run a lower downforce setup. He argued the point with race engineer Chris Simmons.

“The debate went back and forth,” explained Dixon. “We were thinking about splitting the cars as far as levels and things like that.  But in hindsight, I’m glad they understood what they were doing.  That’s why they do what they do.  I just drive the car. ”

Initially Dixon felt that his car was a handful as Team Penske dominated the early laps of the event. However, working with the setup throughout the race proved that Simmons had made the right call.

“I was trying as hard as I could.  Just when I’d get to the corner, I’d keep going straight.” said Dixon. ” I just couldn’t get the car turned.  I was maxed out on all our adjustments inside the cockpit.

“I knew obviously with the speed and how Tony had moved up there that the car was good because we weren’t too different, you know, especially on the levels of downforce.  The mechanical side was a little bit different, but fairly close.  I knew once we got the balance right, we could be up there with him, probably duel it out with him towards the end.”

While the aero-kits allowed for some close racing on the track, it was nothing like the three and four-wide pack racing that promoter Eddie Gossage had hoped to see.

Instead, what we saw was an incredibly fast, and incredibly safe race. There were no accidents and the lone caution of the day was for debris on the track. It was the type of race that saw the drivers showcase their true skill in a drama-free setting.

While Dixon checked out in the late stages of the race, there were entertaining battles throughout the field highlighted by a thrilling duel between lifelong friends Helio Castroneves and Tony Kanaan. Overall, driver feedback on the event, and the show it provided, was quite positive.

“We had good battles out there, really intense, really tough,” said Castroneves.  “Any day, any time, running with guys like that that respect each other, it’s fun, it’s great.  That’s what I race for.  That for me was a fun race.  I can go any time, race like that.  Hopefully those young guys learn from it.”

Penske racing’s Juan Pablo Montoya remains atop the season points standings with 348 points to Will Power’s 313. Dixon is close behind with 305.

The Verizon IndyCar Series heads North next weekend for the Honda Indy Toronto. The street race has long been a favorite amongst drivers and fans. Television coverage will be provided by NBC-SN beginning at 3:00 PM Eastern on June 14.