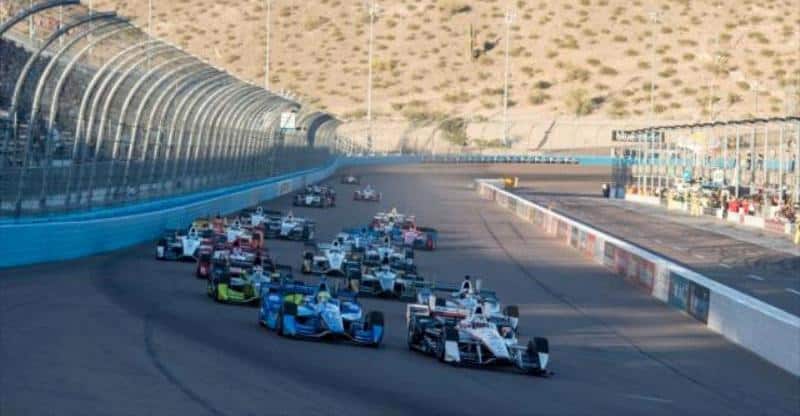 With the Verizon IndyCar Series having completed their return to the desert, and the Desert Diamond Valley West Phoenix Grand Prix now in the record books, there are a number of different reactions amongst the drivers, fans, and the media.

In examining all that has been said about this past weekend, I am going to attempt to add some perspective to the varied reactions.

The first topic is whether or not the event was a success. That is directly dependent on how you would define a success.

Firstly, the weather cooperated. Ask anyone associated with NOLA how weather can destroy a first-year event. There was rain all over the Phoenix Valley, but it chose to stay away from the Raceway. This simple fact allowed practice, qualifying and the race to go off at its scheduled time without the necessity of rearranging the schedule.

While there were a few crashes in practice and qualifying, and a few in the race, it was a very safe weekend with nobody getting seriously hurt. The track record was shattered in qualifying, and Scott Dixon took the win, moving up another notch on the all time list. All good stuff.

Certainly, attendance can define a success. There is nothing worse than a sporting event with nobody there to watch. Now, if you compare the Phoenix Grand Prix to the NASCAR weekend, the number looks small, but that is an unfair comparison.

To define a success or failure of a first-year, or returning, event one has to compare the numbers to the promoter’s expectations.

These numbers are highly encouraging when we look at what they were up against. The NASCAR weekend was just a few weeks prior, the NCAA finals were on television, and the annual airshow at the nearby Luke Air Force Base was held the same weekend.

The date may need to be tweaked in the future, especially when you consider that the NCAA Final Four is scheduled to be held in Phoenix in 2017. However, it is a bit too early to discuss future scheduling.

So, another topic up for debate is whether or not is was a good, and entertaining, race.

This is the topic that has the most division. Some called it a snoozer, while others were thrilled with the on-track action.

In reading thousands of social media comments, opinions are sorely divided among those that watched it on television, while reactions from the folks that sat in the grandstands were overwhelmingly positive.

This, of course, is not an uncommon phenomenon. Attending a live event is infinitely more compelling than watching it from your couch. The sights, the sounds, the smells, and being a part of the crowd is a captivating experience.

I can’t stand to watch baseball or basketball on television, but if you take me to the game, I’ll have the best time.

With that being said, the race statistic of ‘Two lead changes among three drivers’ seems pretty boring, especially when you factor in that those lead changes were not competitive passes.

There was, however, passing in the field, most notably in the late stages from Ganassi driver Tony Kanaan who stormed through to capture fourth place.

Ryan Hunter-Reay, in the Andretti Autosport Honda, took full advantage on the start, on on subsequent restarts, to gain a number of positions.

Truth be told, one of the biggest letdowns was the finish under caution. This led to some of the most spirited reactions among fans.

For those at home, the NBC-SN broadcast team captured Ryan Hunter-Reay tagging the wall and dropping a winglet on the track with less than ten laps to go.

A quick caution here to pick up the piece of carbon fiber would have served to bunch the field, setting up another restart, perhaps giving Pagenaud, Power or Kanaan a shot at Dixon.

Instead, the track stayed green, with a caution finally flying on 248 of 250, setting up the finish under caution.

Thinking that IndyCar had just now noticed the debris on the race course that was deposited several laps earlier, many fans were left bewildered, nonplussed, and just plain angry, feeling that they had been robbed of a thrilling finish.

The fact not shown to the television audience, or even mentioned by the broadcast team, was that rookie driver, Alexander Rossi got it nearly sideways coming out of turn four, brushing the wall and causing the final caution.

I’m still a bit confused myself as to why a piece of wing, capable of cutting a tire, was left on the track as the final laps clicked off, but that fact is a non-issue at this point.

There is no guarantee that a restart with three or four to go would have set up an exciting finish, although the possibility is interesting to entertain.

IndyCar surely has some work to do with the aero-package for Phoenix, but with only a two-day test to work with, we got what we got.

Making wholesale changes to the kits, without further testing, or input from Firestone on a tire compound, might have had disastrous effects.

While some NASCAR drivers, watching from their motor-homes in Martinsville, (most notably Brad Keselowski and Jimmie Johnson)  took to Twitter to express their displeasure with the quality of racing, the IndyCar set can take solace in the fact that we have an entire year to tweak the racing.

While we may never see the likes of the racing that the Handford device produced for CART in 1998, or the side-by-side oval racing seen on the1.5 mile tracks in the Indy Racing League, the Series will certainly come up with a solution that will make the racing more palatable for the drivers, and more exciting for the fans.

As far as the drivers were concerned, there were mixed reactions as well, but the bulk of them agreed that it was a very difficult race.

“The frustrating thing is that I felt like I had the best car out there.” said Graham Rahal, reflecting on the event.  “I could catch everybody but I just couldn’t pass at all, so I started to save fuel.”

Rookie driver, Conor Daly, had this to say, “It was more active than I thought it was going to be out there. Certainly crazy when you got off line. Some really interesting moments and some really hairy moments but I’m just glad we made it to the end and made it through unscathed.”

“We were able to hang in and run the pace even though we couldn’t get close to the cars ahead so I couldn’t make up much ground, ” said A.J. Foyt driver, Jack Hawksworth.

2014 series champion, Will Power, perhaps the most vocal of the drivers regarding the high downforce setup, had this to add. “Man, the Gs were unbelievable. We were wide open at the end there when it cooled down. So much load!  You gotta be a body builder to drive these things.”

“It’s been really hard to pass out there, which is surprising.” added Ed Caprpenter. “After the warm-up I thought it was going to be a really racy race, but everyone just kind of equalized tonight.”

Race winner, Scott Dixon, summed it up best when he said, “I think it was good race and a good start for us coming back to Phoenix for the first time. Can we improve on the racing here? Absolutely. And I can’t wait to come back next year.”

And echoing the four-time champion’s sentiment, I can’t wait to come back here next year either.

The Verizon IndyCar Series has come away from a race weekend at Phoenix with much to learn, but also with much to build a solid future on.