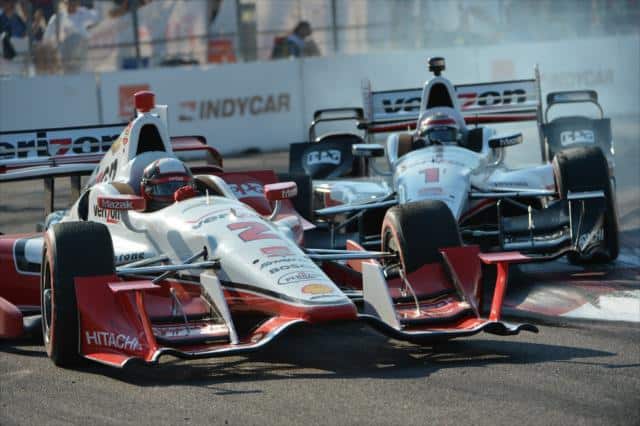 One year ago, Juan Pablo Montoya arrived at The Firestone Grand Prix of St. Petersburg to drive an IndyCar for the first time in fourteen years, having spent that time in other racing disciplines.

His goals on that day were quite simple: to learn the car as best as he could, to keep the car in one piece, and to finish the race. This ultra-conservative approach led to an uneventful race in which he started eighteenth and finished fifteenth.

With a full season in the Verizon Indycar Series now under his belt, the Penske driver let it be known quite publicly that we wouldn’t see that same approach in 2015.

“Last year, I was very conservative, ” said the Colombian driver on Sunday morning. “Today, I am here to win.”

That is exactly what he did.  When many were predicting an epic battle between his teammates, Simon Pagenaud and Will Power, it was Montoya standing tall in victory lane at the end of the day.

Team Penske, with Chevrolet power and aero-kit configuration, dominated practice and swept the first four positions in qualifying. Defending Series Champion, Will Power, started from the pole and led from the green. He looked unbeatable for most of the day.

While there was spirited racing, bumping and banging behind him, Power rarely put a wheel wrong and looked to be well on his way to a rout. That is, until the final round of pit stops. Montoya, running in second at the time, was able to capitalize on ultra-quick pit work, and a barn-burner of an out-lap to take the lead.

From there, Montoya was able to hold off his charging teammate. Power made a move to pass with ten to go, and the two Penske cars made slight contact that left Power’s front wing damaged. Having successfully held off the challenge, Montoya cruised to the checkers completing the event with a margin of victory just shy of one second.

“I saw him make the move, but he was way too far and I wasn’t going to give him the position,” Montoya said. “If he was beside me, I would have said, ‘OK, go ahead.’ When I got to the turning point, he wasn’t even close. It is a shame we touched, but it’s all good, it’s racing.”

For his part, Power did not seem too disappointed with his second place finish.

“If I hadn’t damaged my wing, maybe I would have had another shot,” Power said. “He was very strong on the front straight and my exits weren’t very good. I thought maybe I would catch him off-guard there. You don’t expect someone to pass there, so, yeah, I gave it a shot. I was surprised at how aggressively he turned, but he wanted to win the race and so did I.”

If the season-opener is any indication, the rest of the field will have their work cut out for them to catch up with the Penske team that put on an IndyCar 101 clinic this weekend.

“Well, I will tell you it was a fight between our two guys in front there. It was just an amazing weekend.” said team owner Roger Penske.  “The guys worked hard in the off-season on the aero-kits and thanks to Chevrolet and Verizon for the support. But to come back this year with the fast times in qualifying and win this race 1-2, and four drivers in the top six: Wow!, what a day.”

When the aero-kits were first unveiled several weeks ago, many speculated as to whether or not all of the extra components would lead to debris cautions. That question was answered with a resounding ‘yes’ as the field was slowed five times for 22 laps to collect aerodynamic bits and pieces off of the track.

Indeed, the first caution came at lap two when a Chevrolet winglet was left on the track on the opening lap. From there, we saw several drivers coming on to pit road for a front wing change.

The Honda front wing seemed especially fragile and prone to disintegrating after minor contact. We can only hope that the supply can meet up with the demand. With new parts still in short supply, many of the teams had only one spare per car.

Despite a few busted wings, the Dallara DW-12 maintained its reputation as a strong and durable chassis as 22 of the 24 starters were running at the finish. The only DNFs were posted by the Dale Coyne cars of Carlos Huertas and Francesco Dracone, both with mechanical gremlins.

With drivers chomping at the bit after an agonizingly long off-season, we saw some aggressive driving on the track on Sunday. Three drivers: Gabby Chaves, Simona de Silvestro, and Graham Rahal, were handed the ‘avoidable contact’ penalty.

Poor Charlie Kimball must have felt like a punching bag when he was punted from behind damaging his rear diffusers. As he was limping to the pits, he was spun by a charging Graham Rahal. Kimball would spin around again on the final lap, due to his own mistake.

“We had great pit stops, and I got taken out by some dumb driving.’ said the driver of the Novo Nordisk Ganassi Racing Chevrolet. “We ended up fixing the rear wing and when I was in clean air, the car was really fast. I guess that is the frustrating thing, really. The result wasn’t there but the speed in the car was.”

For his part, Rahal attempted to lay the blame on Kimball for the contact. While Rahal still drew the penalty, and igniting a bit of a controversy on social media, the bigger story is that it seemed like a very different Graham Rahal driving today.

Graham Rahal has disappointed so often in recent years, that I wrote off his chances in my pre-season articles. This weekend, he displayed that, perhaps, 2015 may be the resurgent season that the Rahal/Letterman/Lanigan team so desperately needs. Had it not been for the contact and the ensuing penalty, it looked as if Rahal had a shot at the podium.

“The car was really good. I was very pleased with it. I thought we had a car that could have won today.” said the driver of the Mi-Jack Honda, “When we got into fifth place after passing Bourdais in Turn 1, Pagenaud in Turn 4 and then Charlie, I had Helio in my sights. I was strong on restarts so I thought I would be able to fight my way up there and catch up to Power.”

Rahal’s day ended up with an 11th place finish, but the potential is there for an exciting season from that team. I’m looking forward to seeing what they have to offer in NOLA, where they were very quick in testing.

While Andretti-Autosport is the de facto Honda factory team, it was the Rahal/Letterman/Lanigan and A.J. Foyt teams who seemed to do the most with the Honda configuration. At the same time, the gauntlet thrown down by the Penske organization shows that it may be an uphill battle for the rest of the teams, both Chevrolet and Honda.

The Verizon Indycar Series will race next at New Orleans Motorsports Park for the Inaugural Indy Grand Prix of Louisiana on April 12th. Coverage will be provided on NBC-Sports Network and on Sirius XM 213 channel 209.