Welcome to Drafting The Circuits -
Home : Blogs : IndyCar Fans Have Plenty to Look Forward to in 2016 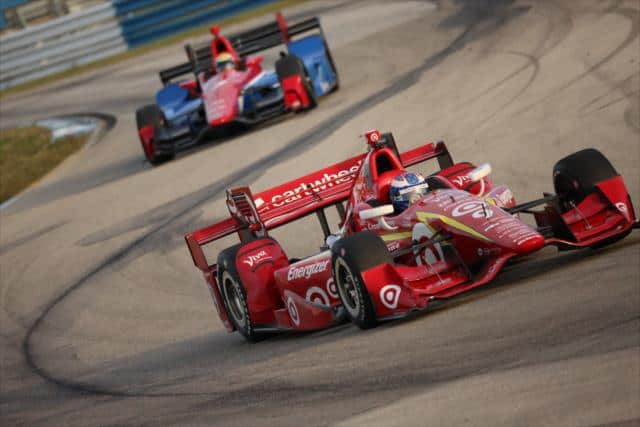 IndyCar Fans Have Plenty to Look Forward to in 2016

The anticipation of a new season is incredible. As soon as the checkered flag falls on each season, the fans, teams, and drivers can’t wait to get racing again. Because the Verizon IndyCar Series has a rather long off-season compared to other series, the wait is almost painful.

Now, the wait is over. Team transporters have arrived in St. Petersburg and it won’t be long before the sweet sound of the engines is permeating the air and the green flag falls on the Firestone Grand Prix.

Coming off of a 2015 season that saw Scott Dixon snatch a fourth IndyCar Championship in the closing segments of the final race, all of the competitors start 2016 with a clean slate.

Mark Miles will once again head the series, providing some consistency in the front office, as he sticks with his vision to grow the series. Jay Frye moves from Chief Revenue Officer to President of Competition and Operations, replacing the departing Derek Walker.

Joining Frye will be Bill Pappas as Vice President of Competition. Pappas is a long time race engineer who has worked with many of the top teams of the sport. Both of these announcements were greeted with overwhelming support from the team owners.

IndyCar’s television viewership has experienced growth over the past two seasons reported to be as high as 38%. In 2016, Indycar will have an extended package that will increase the Series’ presence on television. Between ABC-TV and NBC-SN, all events will be shown live, with many hours of practice, qualifying, and support series races to be broadcast as well. In addition, NBC-SN will air five 30-minute specials throughout the season titled IndyCar Chronicles.

The 2016 schedule will see the return of two venues that both have a rich history of American open wheel racing. The tight 1-mile oval at Phoenix will host the IndyCars in early April, and the sprawling 4-mile road course in Elkhart Lake, WI will see the series return in June.

There will be one brand-new venue this season as the Grand Prix of Boston will be held on Labor Day weekend. The Series has not had a presence in New England since running at New Hampshire in 2011.

The date in Boston has met with some local resistance and been mired in good old Boston politics, but at this point everything seems to be a go. All involved have high hopes that this important market will become an IndyCar mainstay for years to come.

The 2016 schedule will feature sixteen races at fourteen venues, with five of those being oval tracks. At the center of it all will be the historic 100th running of the Indianapolis 500.

There are enough story-lines surrounding this event to fill a novel, with one of those being that Penske driver, Helio Castroneves, once again has a chance to make history by joining the four-timers club.

There is some concern that the series will not be able to produce the 33 starters that traditionally comprise the Indy 500 field.

With Honda and Chevrolet committing to supplying extra engines to fill the grid, my personal feeling is that the historic nature of this year’s 500 will draw some sponsors out of the woodwork to fill the gap.

There is certainly no shortage of drivers willing to take those spots with guys like J.R. Hildebrand, Gabby Chaves, and Ryan Briscoe eager to put a Month of May deal together.

Even if we only end up with 28 or 29 cars, the racing will still be epic, if the past few Indy 500s are any indication.

The 2016 IndyCar field will feature 21 full time entries. Sixteen of those drivers have won races in IndyCar, Six have won Championships in either IndyCar or CART/Champcar, and five have taken victory at the Indianapolis 500.

Joining this ultra-competitive field will be three rookie drivers, Conor Daly, Max Chilton and Alexander Rossi comprising one of the strongest rookie classes in recent memory.

At the top of the grid, we can fully expect Chip Ganassi Racing Teams to enter 2016 without missing a beat. Their team-centric approach that focuses solidly on Scott Dixon as team leader worked to perfection last year. Dixon will again be paired with teammates Tony Kanaan and Charlie Kimball, while Max Chilton joins the team for his first season.

Team Penske took the opposite approach last season allowing their formidable four-driver lineup of Castroneves, Will Power, Juan Pablo Montoya and Simon Pagenaud to duke it out amongst one another.

In a 2015 season where many pundits predicted total domination by Team Penske, the strategy seemed to blow up in their face.

I cannot imagine the the Captain was pleased seeing Power and Montoya take one another out at the finale, while Dixon sped ahead towards the race win and the season crown.

If I know anything about the Penske organization, it is they learn from their mistakes, and we might expect a much more structured race strategy in 2016.

The third of the big-three teams, Andretti Autosport, started off 2015 slowly, but Ryan Hunter-Reay found his mojo by seasons-end taking race wins at Iowa and Pocono, finishing a respectable sixth in the final standings. Hunter-Reay, along with his teammates Carlos Munoz, Marco Andretti and Alexander Rossi will be looking to start 2016 on the right foot, confident that Honda has made major gains with its aero package in the off-season.

2015 also saw race wins from Schmidt-Peterson Racing with James Hinchcliffe, Carpenter Racing’s Josef Newgarden, and KVSH driver, Sebastien Bourdais. All of these teams and drivers have the potential to play spoiler on any given Sunday, or become a serious dark-horse title contender.

But, perhaps, the biggest challenge to the big dogs will come once again from the one-car Rahal/Letterman/Lanigan Team.

Driver Graham Rahal took two wins in 2015 and was solidly in title contention late in the season, until his championship aspirations were derailed by disappointing results at the final two events on the calendar.

Rahal will have a teammate at selected races this season. Indy Lights champion Spencer Pigot will join the team at St. Petersburg, and also for the month of May at Indianapolis. We may see the young driver elsewhere should additional funding come to the team during the season.

The other major topic that IndyCar is working hard to address is the safety of the cars. The low point of 2015 was the loss of one of the most popular drivers in the paddock, Justin Wilson.

Wilson succumbed to injuries suffered at Pocono Raceway when he was struck in the head by a piece of debris from a crash that occurred in front of him. IndyCar will be adding tethers on several of the aerodynamic components, including the nose assembly.

Additionally, the DW-12 cars will feature skid domes and wing flaps, designed to prevent cars going airborne, like we saw at Indianapolis.

IndyCar is also looking at other viable options to protect the drivers in the near future. The development of the Halo device, that is being tested in Formula One, is being watched closely as the Series considers its best course of action.

The Verizon IndyCar Series kicks off this coming Sunday. Coverage of the Firestone Grand Prix of St. Petersburg will air on ABC-TV beginning at 12:30 PM EST. Don’t miss it!