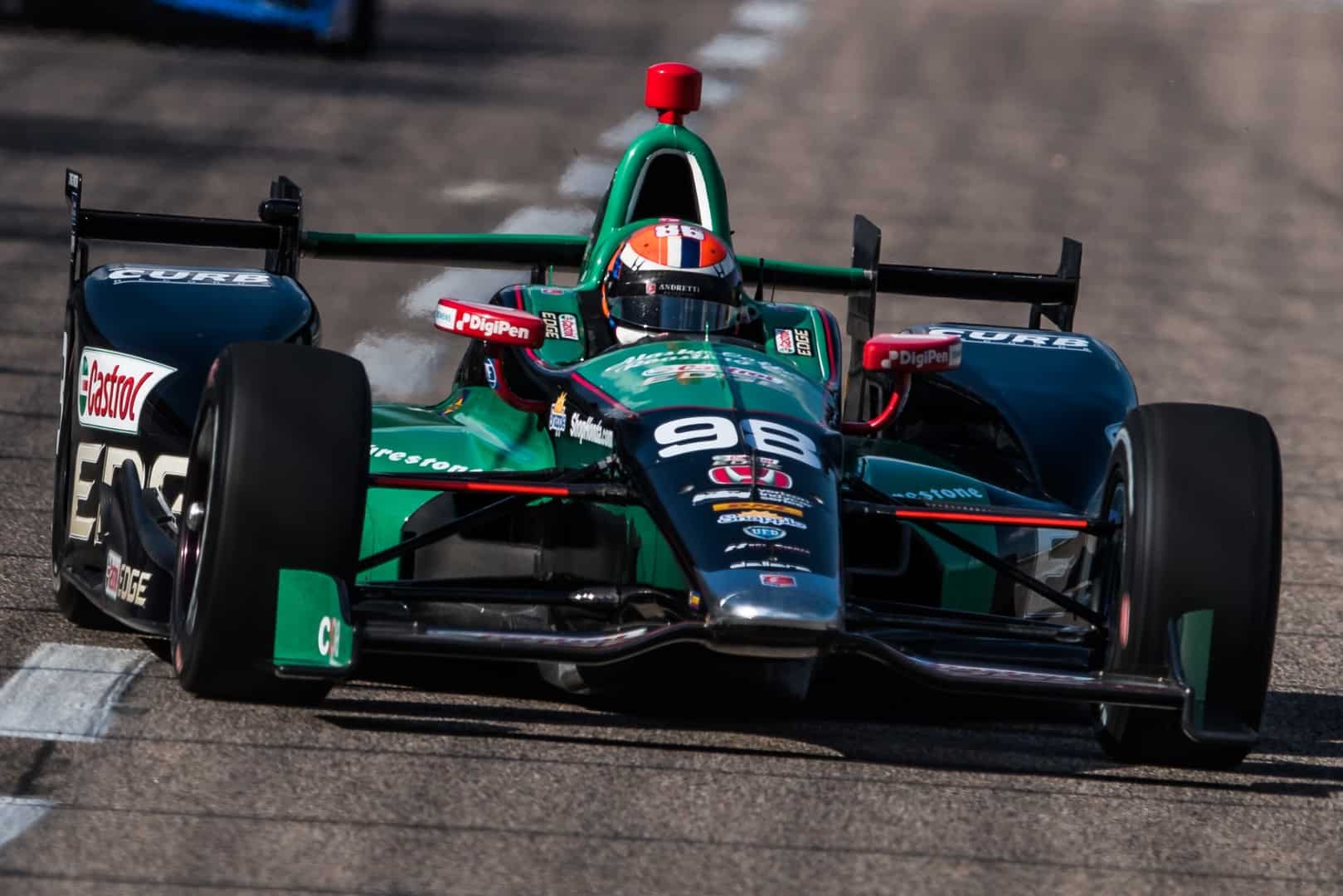 Alexander Rossi’s  journey over the last few years has been nothing short of amazing.  From a Formula 1 reserve driver looking for his big break, to an Indianapolis 500 winner, Rossi has gained the attention of the racing world and been rewarded  for his effort in spades.   I had the opportunity to discuss this journey with Rossi at Texas Motor Speedway before the August conclusion of the Firestone 600, a race where Rossi finished in 11th position and again, took the top rookie spot in the field.  The young racer  from Northern California has certainly made a name for himself in his IndyCar debut and appears to be a shoe in for Rookie of the Year.

Rossi has been frank in his desire to be a driver who tackles racing across the pond in Europe.  A competitor with a racers dream formed in California, Rossi transferred that desire to the worldwide stage of Formula 1.  He made a name for himself in Europe, working his way through the open wheel ladder series, earning GP2 Vice Champion in 2015, and landing stints as a reserve driver for both Caterham and Marussia/Manor Racing in F1.  Last year, Rossi ran 5 Formula 1 races for Manor, outperforming his teammate Will Stevens during the impressive run.

Alexander Rossi at the US Grand Prix in 2015

In a surprise move, for 2016 Rossi turned his sights to IndyCar and landed his current role with Andretti Herta Autosport w/ Curb Agajanian.  While impressive as a rookie, Rossi wowed the world when he won the prestigious 100th running of the Indianapolis 500.  Rossi, who has been a welcome guest on Drafting the Circuits and F1 Racing Plus, took some time from his preparation for the running of the Firestone 600 last week at Texas Motor Speeday to talk about a variety of racing topics.

Winning the Indianapolis 500 in his first opportunity was certainly not on the radar for the IndyCar rookie.  The 500 had not been won by a first year driver since Helio Castroneves won in 2001.  Rossi ran to victory by employing a brilliant fuel conservation strategy that was, frankly, a huge roll of the dice.   Bryan Herta, who was spotting for Rossi during  the race, has stated that what Rossi did was almost impossible and extremely difficult.

Three months removed from victory, it was obvious the win was a proud and emotional moment for the IndyCar rookie.

The scene was one for the memory books.  Rossi was understandably emotional as he made his way to victory lane. The disbelief in his voice, and on his face, was representative of why we engage in games of sport; to work hard and be rewarded for years worth of effort.  It was powerful, it was emotional, and mostly, it was genuine.  This was especially so when Rossi’s father, Pieter Rossi, reached into the race car to congratulate his son.

I asked Rossi about this specific moment.  His reflection was genuine and heartfelt.  “Three months later,  I don’t really know if there is a word of emotion, it was obviously a very powerful moment for the both of us.”  There was “excitement and pride on both of our ends just because it has been quite an interesting and difficult journey and it was a path that we were not expected to take.  I’ll speak for both of us, we felt very blessed to be in that position.”

Rossi’s success at Indianapolis came as somewhat of a surprise due to the learning curve associated with high speed oval racing.  Rossi picked up this skill quickly, speaking to his talent behind the wheel of an open wheeled racer.  Rossi has enjoyed ovals “this year specifically because the (Honda) package is competitive and strong.  Ovals are races where we have an opportunity to get a good result.”  When asked who assisted him in developing his oval racing prowess, Rossi gave credit to the whole Andretti Autosport team.

“Having Michael (Andretti)and Bryan (Herta) is a perfect group to have as a rookie with their wealth of knowledge.  Beyond that, my teammates have been unbelievable and it is an amazing working environment.  Even though we are all very much competing against each other, off track there is nothing reserved and everything is shared in an effort to move all four cars forward.  It’s super positive.”

Rossi at Texas Motor Speedway during the Firestone 600

As an open wheel racer, Alexander Rossi is well aware of the danger associated with this form of motor racing.   He was involved in a pitlane incident at Pocono that quelled his chance for victory and, as Rossi explained, “put Helio (Castroneves) in a challenging situation”.

As far as head protection, Rossi is fully behind the current technological push in Formula 1 which is intended to enhance driver safety.  “There have been a lot of scenarios recently where there have been head injuries.”  Rossi specifically referenced the tragic loss of Manor driver Jules Bianchi who lost his life from a brain injury sustained during the 2014 Japanese Grand Prix at Suzuka.   “I was very close to Jules and this was incredibly impactful for me, so this is something that I want to see improved and changed.”

From a timeline perspective, Rossi took the mature approach of making sure that any solution for head protection is done correctly.  “An educated decision is the right way forward. Rarely does anything positive come from a knee jerk reaction.”  He went further, complimenting the FIA for doing the research and “spending a lot of time on the Halo” and “not just bolting something on.  The most important thing was to not rush anything until it is 100%” the right solution.”

In addition to running a full season in IndyCar, Rossi currently holds a reserve driver role for the Manor team in Formula 1.  This ambitious undertaking has allowed Rossi to maintain his hand in the Formula 1 world while running the season for Andretti Autosport in IndyCar.  Rossi expressed his appreciation to both Andretti and Manor describing the teams as “understanding the situation and incredibly open minded.”

The bonus of this undertaking is that Rossi becomes a man with opportunities on both continents. It will be interesting to see how this shakes out for the young racer.  The big question facing Alexander now is where he lands in 2017.  Rossi revealed that  his team is”putting a lot of effort into IndyCar” but there are also options in Formula 1.  In a light moment, Rossi was optimistic that his deal would be in place well before Christmas allowing for a relaxed holiday, something that has not always happened in the past.  Rossi was hopeful that his deal would be announced possibly around “Octoberish.”

Rossi is a polished professional and in reality, he is an IndyCar rookie in name only.  In truth his racing prowess and experience is well beyond that of most rookies and his results show that. His open wheel experience in Europe, in Formula 1, and now in IndyCar have garnered him a tremendous amount of varied on-track expertise.

Perhaps most importantly, each time he is given a competitive car, he wins.

In addition to his on-track skill set, which is considerable, Rossi is a accomplished professional who presents himself well and is a worthy ambassador for race teams and sponsors.  Between our interview and the writing of this article, Rossi was named as the newest member of the TAG Heuer family of ambassadors, demonstrating his worth as a corporate representative.  It will fun to watch the young American flourish whether it be across the pond in Formula 1 or continuing along in IndyCar.  As a racer with the guts to attack open wheel racing in Europe and the skills to win “The Greatest Spectacle in Racing”,  Alexander Rossi is a driver we will be hearing about in headlines for many years to come.