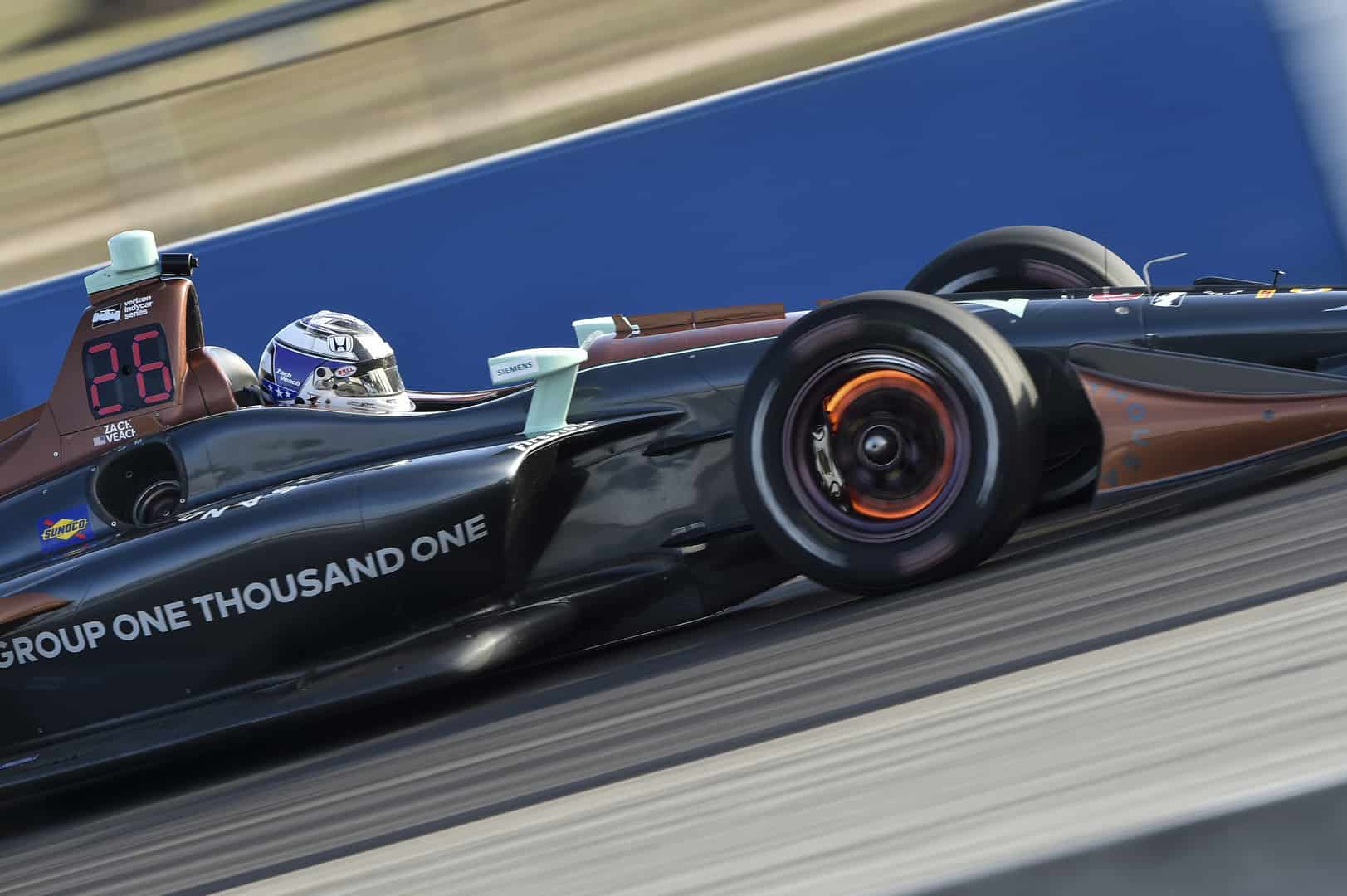 A successful rookie campaign does not necessarily make or break a driver’s IndyCar career. However, in today’s impatient climate, results speak volumes. Look no further than Ed Jones, 2017 Rookie of the Year, for evidence of this. Jones signed on for a full season with Dale Coyne Racing and was impressive right out of the gate. After his much more experienced teammate, Sebastien Bourdais, was sidelined with an injury, Jones had the mantle of team leader thrust upon him early in the season.

The combination of hard work, solid results (including third place at the Indy 500), and the way he handled himself under pressure landed him one of the more coveted spots in Indycar: partnered with Scott Dixon at Chip Ganassi Racing.

2018 will see one of the largest rookie classes in recent years with six drivers in part-time roles and three with full-time rides gunning for Rookie of the Year Honors. Let’s examine the Rookie Class of 2018

While he is a rookie in the Verizon IndyCar Series, Robert Wickens can hardly be considered a rookie driver. The 28 year-old Canadian graduated from karting in 2005 and began a career in open-wheelers that included stints in Formula BMW, Champ Car Atlantic, Renault 3.5, Formula Two and GP3. He has also served as a test driver for the Marussia Formula One Team

His recent experience has come in the Deutsche Tourenwagen Master (DTM) Series for Touring cars where he has been a fixture since 2012. Having taken six wins in that Series he moves over to IndyCar at the urging of his good friend, James Hinchcliffe, who will be his teammate at SPM.

For Zach Veach, a full-time ride in the Verizon IndyCar series is a dream he has been chasing for a number of years. He was discovered in karting by Dave Fisher, whose daughter just happens to be Sarah Fisher, and found himself testing a Formula BMW at the age of 15. In 2010, he joined the Andretti Autosport team to run the USF2000 series. He finished the season fifth in points despite only competing in 10 of the 12 events.

He remained with Andretti Autosport through Star Mazda and graduated to Indy Lights where he took three race wins and third in the season standings in 2014.

He had hoped to move up to the IndyCar Series at that point, but a hand injury left him sidelined in 2015. He returned to Indy Lights in 2016 with the Belardi Team. He had two IndyCar Series starts in 2017; filling in for the injured J.R. Hildebrand at ECR in Alabama, and running the Indianapolis 500 for A.J. Foyt Racing.

Veach has worked hard to put his 2018 deal together that reunites him with Andretti Autosport, and is looking to make the most of the opportunity

With A.J. Foyt Racing looking again to revamp their team and change their fortunes, they chose opposite ends of the spectrum to complete their 2018 driver lineup. Leading the team will be Indianapolis 500 winner and Series Champion, Tony Kanaan, the oldest and most experienced full-time driver on the grid. His teammate will be fellow Brazilian Matheus “Matt” Leist, who, at 19 years of age, will be the youngest IndyCar driver in 2018.

What he lacks in experience, he makes up for in both talent and work ethic. After graduating from karting he debuted in the junior Brazilian F3 Championship at the age of 15 and finished second in the final standings.

Just two years later, he won his first national title, taking the championship in the BRDC British F3 Championship on his first try. After testing in GP3, he was convinced by Trevor Carlin to come over to the United States and run the Indy Lights Series. He took three 2017 wins, including the Freedom 100 at Indianapolis.

While it remains to be seen if the new-look A.J. Foyt Team can climb back to the top, the combination of Tony Kanaan and A.J. Foyt will certainly be a fine learning environment for this young driver.

As exciting as it is to see new drivers on the grid, its even more encouraging to see new teams joining the series. The next two rookies we take a look at pack a double-punch as they debut with Juncos Racing in the Verizon IndyCar Series.

Kyle Kaiser, the 2017 Indy Lights Champion, was able to parlay his MRTI Scholarship money into a four-race deal with Juncos Racing, the team that brought him to the dance. Sometimes mistaken for an International driver, Kaiser is actually a typical laid-back California native, much in the mold of Alexander Rossi or Ryan Hunter-Reay.

He began in karting at a young age, and took his talents into the Skip Barber program where he won a scholarship. After taking a title in the 2012 Formula Car Challenge, he moved up to Pro Mazda, where he caught the attention of Ricardo Juncos.

Juncos signed Kaiser and he has been an integral part of the team’s success, following in the footsteps of Spencer Pigot who gave Juncos their first Lights Championship in 2015.

With a four race schedule that will see Kaiser compete at Phoenix, Long Beach, The Indy Grand Prix and the Indianapolis 500, he remains in a familiar environment that has produced recent success.

The remainder of the partial season for Juncos racing will see Austrian driver, Rene Binder, in the seat at St. Pete, Barber, Toronto and Mid-Ohio.

Binder is largely unknown in the States, but he brings much-needed funding to the team from Binderholz, a European timber company that has been owned by his family for three generation.

While pay drivers sometimes hold an unpleasant stigma, Binder has actually amassed a wealth of experience in European open-wheelers, competing in German Formula 3, FIA GP2, and Formula Renault 3.5. In his most recent gig, World Series Formula V8 3.5, he claimed 4 wins and ten podiums over the past two seasons.

Much like the aforementioned Matheus Leist, Zachary Claman DeMelo is a prodigy whose talent transcends his age and lack of track time.

De Melo, who has one IndyCar Series start already under his belt with Rahal/Letterman/Lanigan last season, will run the second Dale Coyne Entry in a partial schedule in 2018.  De Melo is expected to start at St. Pete, Long Beach, Barber, both Detroit races, Road America, Iowa, Pocono and Gateway.

From an early age, he was a standout behind the wheel. By the time he was 16, he had already amassed 8 regional and national karting championships in his native Canada.  He moved on to Skip Barber, where he again found success before running Formula Renault in Europe. He ran two seasons of Indy Lights in 2016 and 2017 before getting the call from Dale Coyne.

In sharp contrast to the rest of the 2018 rookie class, Fittipaldi actually began his racing career in late-model stock cars in Hickory, North Carolina. In 2011, he took four wins en route to the track Championship in the NASCAR Whelen All-American Series. From there, he headed over to Europe to try his hand at single-seaters winning championships in Formula Renault and Formula 2000.

He was invited to the prestigious Ferrari Driver Academy in 2014 based on the strength of his results. In 2017, he took 6 wins in the World Series Formula v-8 3.5 Championship earning yet another championship title.

Fittipaldi’s 2018 schedule in IndyCar will see him compete at Phoenix, both Indianapolis races, Texas, Mid Ohio, Portland and Sonoma.

As per his usual arrangement, ECR team owner, Ed Carpenter, will contest an oval-only schedule while he hires a road racing specialist to run the street and road courses.

This season, Carpenter has turned to British driver, Jordan King, to fill that role. King comes from a wealthy British family, his father having been quite successful in the retail and food industry. He is certainly bringing funding to the team, but again, don’t let that cloud your judgement about his prowess behind the wheel.

Like many others, he began karting at an early age and moved up the ranks in European open-wheel racing. He won championships in Formula India 1600 and in British Formula 3 before joining the development driver program at Manor Formula One. Among the other drivers in that program was Alexander Rossi, who encouraged King to cross the pond and give the IndyCar Series a go.

The final rookie in the series in 2018 is Jack Harvey, who was a standout in his native England before coming to the States and dazzling in the Indy Lights Series.

Michael Shank Racing, with a successful IMSA program underneath them, joins the Series in a technical partnership with Schmidt-Peterson Racing that will put Jack Harvey behind the wheel at St. Pete, Long Beach, Indianapolis, Mid-Ohio Portland and Sonoma.

After winning multiple karting championships, Harvey was the benefactor of the British Racing Drivers’ Club’s “Rising Star” initiative. In 2012, he delivered on that promise by winning the British F3 Championship before moving on to GP3.

Joining the Indy Lights Series with Schmidt Peterson Motorsport, he took consecutive runner-up finishes in the championship in 2014 and 2015 taking six race wins along the way.

The 2018 Verizon IndyCar season gets underway this weekend with the Firestone Grand Prix of St. Petersburg on March 11.