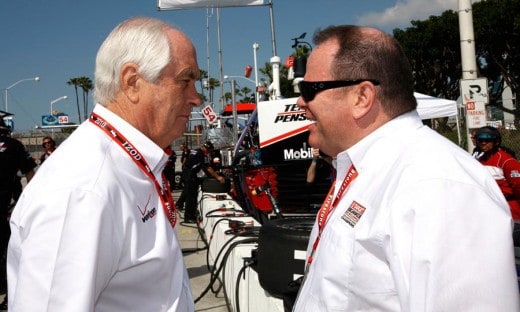 Coming off of a weekend that saw many of the stars of IndyCar compete in the Tudor Sportscar Rolex 24 at Daytona, the start of the 2015 Verizon IndyCar Series is right around the corner. Media Day will be in mid February, and we can expect all of the open seats to be filled by then.

Teams are testing in earnest with the season-opener just five weeks away. The season will open in Brazil on March 8th using the 2014 configuration Dallara Chassis. The following week, the first open test with the new aero kits will take place at Barber Motorsports Park. Round Two of the championship, on March 29, will see the competitive debut for the aero kits at the Grand Prix of St. Petersburg.

Then, and only then, will we know who did a better job with the aero kit, and what, if any, competitive advantage Honda or Chevrolet may hold over the other. This makes the business of making predictions a bit difficult until all the information becomes available.  That, however, won’t stop this writer from attempting to do just that. In part one of this article, we take a look at the top two Chevrolet teams in the Series, owned by Roger Penske and Chip Ganassi.

The 2014 campaign ended in a championship for Australia’s Will Power.  It was the first IndyCar championship for the Penske team since 2006, and it was well deserved. The Penske organization, in fact, had a banner year in 2014 with all three of their drivers winning races and finishing in the top four in points. Combine this with the considerable success they had with their stock car teams, and its easy to see why they are the team to beat in any series.

For 2015, the dynamic of the team will experience quite a shake up. The team will expand to four full-time entries as Simon Pagenaud joins a formidable driver line up that includes Power, Helio Castroneves and Juan Pablo Montoya.

Pagenaud, who hails from Le Mans, France, was one of the hottest properties on the driver market following 2014 and Penske snatched him up quickly.

It remains to be seen how the fourth car affects the overall performance of the team. Penske’s IndyCar efforts have been traditionally centered around a two-car operation, although there were several seasons when they ran three cars successfully, including 2014.

How does a team of Penske’s caliber handle such a change? Enter Kyle Moyer. Team Penske hired Director of Racing Operations, Moyer, away from Andretti Autosport. The Andretti Team has become one of the best in the business at running four, and even five, car operations.

Expect Team Penske to once again be on top of their game. There are some interesting questions on the driver front that will be answered as the season unfolds.

Pagenaud will be going from team leader at Schmidt-Peterson Motorsports to the bottom of the pecking order at Penske.  His new teammates have a combined record that includes two championships, four Indy 500 wins, and 65 race victories.

This is not to say that Pagenaud will get the shaft. In fact, I would expect quite the opposite. Pagenaud must be seen as the future of the team. After all, with no disrespect to either driver, both Montoya and Castroneves will turn 40 this year, and are on the down side of their fine careers.

That being said, both were impressive this past season. I have had this tendency to write Helio off at the beginning of the the year over the past few seasons. Then, he bounces back and proves me wrong.  Montoya came into last season with low expectations after several seasons of running stock cars. Perceived as overweight, out of shape and over-rated, he managed to prove his detractors wrong in 2014 by taking a 500 mile race win at Pocono and fourth in the final standings.

The giant elephant in the room is the relationship between Will Power and Pagenaud. The two were once great friends, but their friendship became strained following a couple of on-track incidents in 2014. Keep your eye on this through 2015.

The bottom line is that, at least on paper, Penske has the strongest outfit in the series. Picking Power to repeat almost seems like a no-brainer.

Although, Pagenaud possesses a focus and determination that reminds me of another fine champion in motor racing history, Ayrton Senna.

The late three-time world champion just happens to be Pagenaud’s racing idol and I can draw a distinct similarity between Senna and Pagenaud’s current situation.

In 1988, Ayrton Senna was the new guy joining the strongest team in F-1 at the time, McLaren. His teammate was Alain Prost, who had two World Championships under his belt at the time.  In that situation, Senna took the world by storm and won the Championship in his first season with McLaren.

As far as I’m concerned: I can see Pagenaud doing the very same thing.

Penske’s biggest rival in IndyCar, Chip Ganassi, is coming off of a weekend that saw his IndyCar and NASCAR drivers team together for an overall win in the Rolex 24 at Daytona.

No doubt, this is a fine way to begin the 2015 season, but the Ganassi IndyCar operation still has some unanswered questions, namely an incomplete entry list.

Three-time series champion, Scott Dixon, will return to the team that has been his home since 2002. He will once again pilot the familiar #9 Target-sponsored entry. Target will not, however, sponsor a second IndyCar as they have in the past.

A new marketing strategy will result in the Minneapolis-based retail giant funneling more money into promoting the sport and less directly to the Ganassi team. While this is a positive overall for the sport, it leaves a void to fill at the team level.

The #10 ride, currently held by Tony Kanaan, was traditionally the Target ‘product’ car. That entry will now carry the NTT Data sponsorship from the #8 car.  Charlie Kimball will return in the #83 with his familiar orange and blue paint scheme in the Novo Nordisk Entry.

The long and short of it all is that the #8 car is currently without a confirmed sponsor, or a confirmed driver. The possibility exists that Team Ganassi may become a three-car effort in 2015.

The smart money rests on 19-year-old Sage Karam landing the fourth Ganassi car. The youngster was impressive in his IndyCar debut at the 500 this past season, starting 31st and finishing 9th. Karam has also run well for Ganassi in the Rolex 24 the past two runnings.

Karam in the Ganassi ride is a scenario that many would like to see, including Chip Ganassi. In a series where it is easier to get a ride with money than talent and potential, Sage Karam deserves a shot. Mark my words: this kid will be the next big thing in open wheel racing.

However, this whole deal rests on the funding and the window of opportunity is closing quickly for the driver from Nazareth, PA. Expect answers on this one in the next few weeks.

As far as the confirmed drivers are concerned, Chip Ganassi Racing will be in its second season as a Chevrolet team. Growing pains switching from Honda in 2014 seemed to hamper the results in the early part of the season.

Tony Kanaan also experienced trouble adapting to his new surroundings in the early season. However, by season’s end, he was contending for the win every week, and took a popular victory in the season finale at Fontana. Similarly, team leader Scott Dixon struggled early on, but took two victories in the second half of the season, and took third place in the overall standings.

The point here is that the Ganassi organization enters 2015 with no excuses. There have been no shake-ups in the engineering department and, despite that fact that the fourth car is up in the air, there is no reason to assume that the other three cars will not be strong right out of the box.

Team Ganassi will have the same Chevrolet power plant and aero kit as the Penske team. Both Kanaan and Dixon will be eager to prove why they are champions in this series, and Charlie Kimball will be hoping to capitalize on his 2013 season that saw him reach the winner’s circle at Mid-Ohio.

While I’m predicting another championship for Team Penske; the Ganassi Team and, in particular, Scott Dixon have shown time and time again that they can never be counted out.

Join me next week when I will take a look at the top two Honda Teams, Andretti Autosport and Schmidt-Peterson racing.