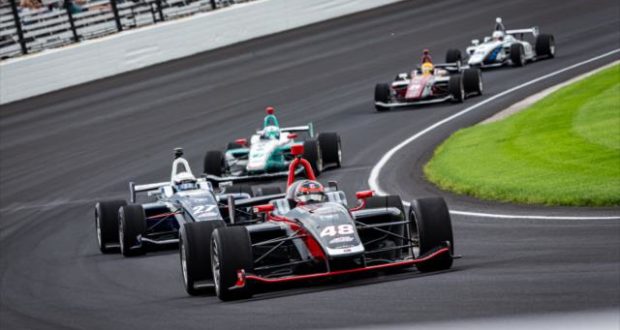 From an outsider’s perspective who’s looking to add the Road to Indy on my stacked media plate. The racing ladder is quite arguably the best racing has to offer with Indy Lights presented by Cooper Tires being the final step before reaching the NTT IndyCar Series.

While I’m glad we’ll finally have some real-life INDYCAR action with Saturday’s Genesys 300 at Texas Motor Speedway, I can’t remiss the fact that June will start off with a huge blow.

The only cars that ran at St. Petersburg in March before COVID-19 forced the race weekend being postponed and halt Indy car competition for nearly three months, won’t hit the grid at all. As first reported by TSO Ladder Sunday and confirmed Monday there won’t be an Indy Lights campaign this season for the first time since 1986.

“The effects of the global pandemic on businesses, including racing, have been severe,” said Dan Andersen, owner and CEO of Andersen Promotions, in a press release. “The changes to our overall calendar of races as well as each event weekend’s scheduling and the ability for some of our drivers to compete has impacted the Indy Lights series far more harshly than our other two championships. With less of a cushion to begin with, it became increasingly apparent that the 2020 season was in jeopardy and the best plan was to take a pause, reconstitute for 2021, and do our best to enhance the Indy Lights championship for next season.

“After discussions with INDYCAR and understanding of their firm commitment to Indy Lights going forward, we, together, decided to suspend the 2020 Indy Lights season. We recognize that this will cause some hardships, but we hope all participants will realize the necessity of this decision and we look ahead to 2021 with a promise of better things to come.”

Yes, everyone knows the car counts have been poor and transitioning cars didn’t turn out well, but at least the competition hasn’t been that weak. Want to talk about pretty weak competition, look at ARCA all across the board, especially the regional divisions. That’s another topic for another time.

This Indy Lights campaign was going to have at least eight full-time drivers and while the void due to teams and its rising stars moving to the big leagues still looms, there were things I was looking forward of following.

No doubt it was seeing how mega junior formula star Kyle Kirkwood was going to fare at Andretti Autosport. This can’t miss talent has dominated in every series he’s competed in and certainly has a bright future in INDYCAR.

Where does he go now? Will there even be an option to run another year in Indy Pro 2000?

These are the first thoughts I thought of for Kirkwood as well as everyone else impacted by the hiatus.

How would Toby Sowery panned out in the title battle with Kirkwood? Could he have amounted a decent charge? We’ll never know.

Sowery won the second race at Portland and was the highest points finisher (third) among those meant to return in Indy Lights.

Being a guy that was intending to cover Indy Lights frequently this year, the Freedom 100, which has been the must-see TV race of the series, won’t happen either.

That within itself made an already rough 2020 due to COVID-19 as agonizing. This iconic 40-lap non-stop thrill fest has now become a part of “The Month of May” and now without the race, an already weird “Month of August” will feel more weirder.

What I sure hope its my first-ever Indy 500 I’ll get to cover, the Freedom 100 was definitely the event I was most looking forward to aside from the 200-lap race itself of course.

Just to feel the vibe of Carb Day with that race in store? You bet I’d be hyped!

It’s a gloomy time for those competitors because everyone will be impacted. To the crews that work on the cars, the teams that are hanging on by a thread or simply have fun yet provide a platform to craft their racing skills. I feel for everyone under these worrisome times.

Stuff like that in racing blows. It happens and that’s the sad reality of it.

Worse when it involves young drivers I’ve grown to respect from afar and shooting photography of the last three race weekends at Gateway, Portland and Laguna Seca last year.

Time will tell how the 2021 landscape will fare, but for now the focus shifts on the two Road to Indy divisions and of course the INDYCAR opener.

Now it would be the time to pay even close attention on the Indy Pro 2000 and USF2000 competitors because their futures could still be an unknown. I’d imagine they’re going to be impacted in some shape or form.

Just to further prove why Indy Lights has been the best feeder series. Look at Saturday’s grid.

Many of them, such as INDYCAR champions Tony Kanaan, Scott Dixon and Josef Newgarden, went through the RTI ladder and became one of the sport’s best.

There are even guys now in the big boy opener that’ll no doubt take the series by storm with one already doing so. Those are the top-two drivers from the last two Indy Lights campaigns — champions Pato O’Ward and Oliver Askew and runner-ups Colton Herta (who won two INDYCAR races last year) and Rinus VeeKay.

Overall, if there’s ever a time for those competitors to give back and contribute into keeping Indy Lights afloat, it would be neat if we see it from them and those race teams like Andretti and Carlin (who used to run an Indy Lights program) to name a few step up.

As the saying goes, time will tell but in times like we’re dealing with in 2020, any amount of help matters. Jay Frye, President of INDYCAR, said it best with his statement on the importance of Indy Lights:

”The Road to Indy is extremely important to INDYCAR,” said Frye. “This was a difficult decision, knowing the impact it would have on the competitors and how disappointing it would be for the fans.

“However, it became clear, that we needed to focus our collective efforts on preparing for a strong 2021 Indy Lights season.”