Welcome to Drafting The Circuits -
Home : Blogs : I Almost Won the Indy 500: A Brief History of Thrills and Controversy 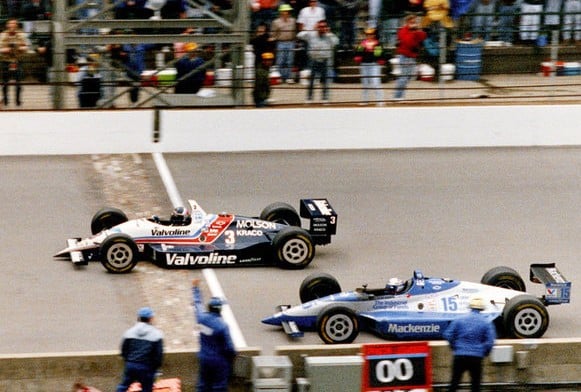 I Almost Won the Indy 500: A Brief History of Thrills and Controversy

The Month of May has arrived in full force as the drivers of the Verizon IndyCar Series are logging thousands of practice laps in preparation for qualifying this weekend.

Every running of the Indianapolis 500 generates compelling and memorable stories that become a part of Brickyard folklore. For every driver that drinks the milk on Sunday afternoon, there are 32 drivers that walk away disappointed, thinking about what might have been.

There are three non-winners in the field this year who were at the wrong end of a thrilling finish in recent memory. All three would love to put up a win, and ensure that their post-career claim to fame is not, “I almost won the Indy 500.”

Marco Andretti, in his rookie season of 2006, was leading on the final lap. He was unable to hold off a charging Sam Hornish Jr. who passed Marco about 400 feet before the finish line.

Another rookie, J.R. Hildebrand, came within one turn of winning the 500 in 2011. Coming up behind a slowing car, he over-corrected and hit the turn four wall shattering his dream, as Dan Wheldon streaked past to the checkered flag.

In 2012, Takuma Sato was embroiled in a battle for the lead with the Ganassi cars of Dario Franchitti and Scott Dixon. It appeared that Sato had the fastest car of the three as he got around Dixon on lap 199. On the final lap, he made a move on Franchitti in turn one and lost control of the car as Franchitti took the win.

While all three of these drivers still have a chance to redeem themselves, there are others in the history of the event that haven’t been able to do so.

Two of the most snake-bitten drivers in the 500 are undoubtedly Lloyd Ruby and Michael Andretti.

Ruby was the subject of a book titled, “The Greatest Driver Never to Win the Indy 500.” Ruby led five different 500s in his career, totaling 126 laps but never finished higher than third.

Michael Andretti leads all non-winners with 431 career laps led at the Speedway, but he was never the recipient of a last lap heartbreak.

Sure, he had a thrilling duel with Rick Mears in the closing stages in 1991, but with five laps to go, Mears was out of reach. The following year, he dominated the race before dropping out with a mechanical issue with eleven laps to go.

While both of these drivers certainly have had hard luck at the Brickyard, there are a few that have a better claim to the statement, “I almost won the Indy 500.”

Scott Goodyear is the first that comes to mind. Goodyear almost won the Indy 500 three times. In 1992 Michael Andretti held a 28 second lead on the field in the late stages before his car slowed to a stop.

Scott Goodyear suddenly found himself in contention for the win as he was elevated to second place behind Al Unser Jr. The two men put on a great show as they battled nose to tail for the final seven laps.

The commentary from Bob Jenkins has been played time and time again in the highlight reels, becoming synonymous with this epic moment in Speedway history.

“The checkered flag is out…Goodyear makes a move!…Little Al wins by just a few tenths of a second!…perhaps the closest finish in the history of the Indianapolis 500.”

As it turns out, it was the closest finish in the history of the event at 0.043 seconds.

In 1995, Goodyear had a healthy lead on the field, and seemed poised to hand Honda its first Indy 500 win, when a late race caution came out. Coming back to the green with ten laps to go, Goodyear accelerated for the restart as the pace car seemed to be moving painfully slow. Goodyear roared past the pace car before it entered the pits.

Goodyear was soon shown the black flag, which put him in a conundrum. If he accepted the penalty, he would most certainly lose the race. If he stayed on the track, perhaps he could protest the penalty, as he believed that the green light was on when he went around the pace car.

He opted to stay on the track, and crossed the finish line first. However, by ignoring the penalty, USAC stopped scoring him at lap 195. The win went to Jacques Villeneuve, who had actually overcome a two-lap penalty of his own early in the race.  After reviewing video, it was quite obvious that the yellow light was still on and the team did not protest.

In 1997, Goodyear was running second to his teammate, Arie Luyendyk, when a caution came out at lap199.  For unknown reasons, the pace car did not come out. The drivers assumed that the race would finish under caution when the green and white flags flew quite unexpectedly for the final lap. Catching the entire field off-guard, this effectively robbed Scott Goodyear of a shot at catching Luyendyk.

Robby Gordon is another driver with a heartbreaking memory of what almost was. In 1999, his Menard team made a late race gamble. Having pitted on lap 164, Gordon stayed out when the caution flew on lap 169. Pinning their hopes on a few more caution laps, he shuffled to the lead attempting to stretch his fuel to the finish.

The gamble nearly paid off and Gordon held onto a decent lead in the final segment. Looking for a yellow that never came, Gordon’s car sputtered out of fuel as the white flag waved. As Gordon headed down pit lane, Kenny Brack took the win.

None of these stories, however, compare to the fire-storm of controversy that was the 2002 Indianapolis 500.

First, a little back story. In 2002, the CART/IRL split was still in full force, but the power balance was beginning to shift in the favor of the IRL. In 2000, Chip Ganassi had brought his team to the 500 and took a win with Juan Pablo Montoya. Team Penske followed suit in 2001, and took a win with Helio Castroneves.

In 2002, Team Penske moved to the IRL full-time, as Team Green, another top CART team, decided to bring their drivers, Paul Tracy, Michael Andretti and Dario Franchitti to the Indy 500.

In the closing moments of the 2002 race, Helio Castroneves was leading but had backed off his pace, presumably low on fuel. This allowed Felipe Giaffone and Paul Tracy to close the gap, setting up a three-man battle for the lead. In the mix was Tracy’s teammate, Dario Franchitti, who was a lap down.

As Giaffone made a move on Castroneves for the lead, Franchitti effectively blocked him, allowing Tracy to slip by into second place. There was no penalty issued to Franchitti, but that’s just the tip of the iceberg.

On lap 198, Tracy passed Castroneves for the lead in turn three. Giaffone and the lapped car of Sam Hornish Jr. also passed Castroneves and headed towards the checkers. Simultaneously, Laurent Redon and Buddy Lazier made contact in turn two bringing out the caution.

A mass confusion followed as Brian Barnhart declared from race control that Castroneves was the leader when the yellow came out. In 2002, the rule was that the field is frozen at the time the yellow comes on, although TV and radio announcers both reported misinformation that scoring would revert to the previous lap. This was an older rule, no longer in effect.

Differing camera angles would show that the track was green when Tracy made the pass, or the track was yellow. Replay after replay seemed to be inconclusive.

Castroneves says he lifted when he saw the yellow, which allowed Tracy to pass. Others claim that Castroneves slowed because he was running out of fuel. At the end of the day, after a victory lap, Castroneves had one gallon of fuel remaining in his Penske car.

“They are not going to let one of us (CART teams) win this thing” remarked Barry Green, Tracy’s team owner. This sparked a conspiracy theory that rivals that of the JFK assassination or the Roswell UFO crash amongst auto racing enthusiasts.

A popular belief is that the IRL wanted to ensure that Team Penske was rewarded for joining the League full-time. Unlike the 1981 Indy 500 where the win switched hands three times, Castroneves’ win was upheld through the entire process of protests and appeals. No one can take that away from him at this point.

At the same time, Paul Tracy was about the last person the IRL wanted to hand a quart of milk to. Tracy, never afraid to voice his opinions, had been very vocal about his dislike for the IRL. In the early days of the split, he coined the term ‘crap-wagons’ to refer to the League’s race cars.

So, was this a slap in the face for Tracy, and a pat on the back for Castroneves? Or, was it a fair and square win for Team Penske who was in the right place when the yellow came out?

We may never have a satisfactory answer to that question, but there is one thing I can tell you for sure. Another page in the history books is about to be written as the 99th running of the Greatest Spectacle in racing is less than two weeks away.