Welcome to Drafting The Circuits -
Home : Blogs : Hunter-Reay Returns to Form in Iowa 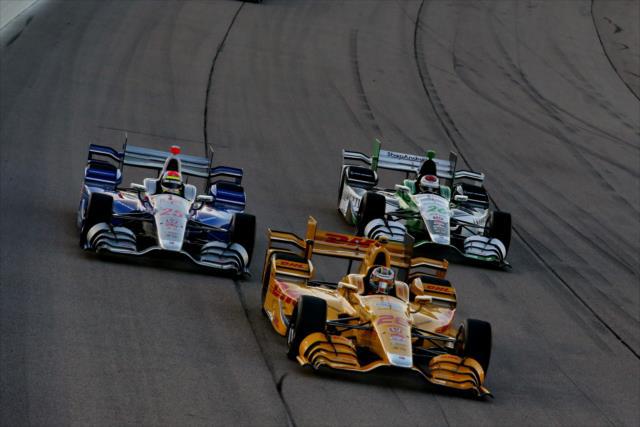 Hunter-Reay Returns to Form in Iowa

Prior to this weekend, the 2015 Verizon IndyCar Series season had been absolutely dismal for former Series Champion Ryan Hunter-Reay.

Indeed, the entire Andretti AutoSport team is having an uncharacteristic off-season. Carlos Munoz did pull off a surprise win in the rain shortened event in Detroit. Marco Andretti has had a consistent season, finishing every race on the lead lap, maintaining a top-ten position in the points.

Hunter-Reay, however, has had no bright spots on the season. He has seemed hopelessly lost week-in and week-out as the team has struggled with the aero-package. Mired deep in the standings, RHR reminded me of Austin Powers when Dr. Evil stole his mojo.

Coming into Iowa as the defending race winner, Ryan Hunter-Reay had high hopes. The 7/8 mile oval track has been especially good to the team with Andretti Autosport drivers winning the past five races.

Those hopes came to fruition on Saturday night as Ryan Hunter-Reay took a popular victory in the Iowa Corn 300. Leading 37 laps on the day, he showed considerable skill holding off a charging Josef Newgarden in the closing laps.

Joining Hunter-Reay and Newgarden on the podium was rookie driver Sage Karam, comprising an all-American podium. Graham Rahal took the fourth spot making it 1-2-3-4 for American drivers in the Heartland.

“It was a lot of work in the cockpit,” said Hunter-Reay. “This one we really had to work for, this was a hard one. After such a tough season, it was great to be back in Victory Lane. In the beginning of the race the car was really loose and I had a hard time with it. This is just amazing”

The win was the 15th of Hunter-Reay’s career, and he becomes the ninth different winner of the 2015 season.

20-year old Sage Karam delivered on a day that had been miserable for his Ganassi teammates. Both Scott Dixon and Tony Kanaan dropped out with mechanical gremlins, while Charlie Kimball tagged the wall ending his day early.

The podium was the best finish of the young rookie’s career, but it wasn’t without controversy. The aggressive driving that got him into third place drew the ire of a few drivers, most notably Ed Carpenter who stormed down the pit lane post-race to confront Karam.

“He has no respect for anyone out there,” Carpenter said. “If it wasn’t for guys with experience driving with their heads on, he would be hurting himself and other people. I think it’s ridiculous.”

“It’s close racing. It’s IndyCar racing” explained Karam. “This ain’t go-karts or anything any more. We’re racing each other hard and we’re professionals and we know each others limits. Tough luck for him.”

Points leader Juan Pablo Montoya was the first one out of the race when a suspension failure put him into the wall on lap nine. With Dixon posting a DNF as well, and Helio Castroneves fading to 11th at the finish, JPM dodged a bullet and leaves Iowa with a 42 point lead with three races left on the calendar.

The largest benefactor of the struggles from the points leaders was Graham Rahal. Suffering with gearbox issues, Rahal fought hard for fourth place. Coming out of Iowa, Rahal finds himself second in points with a realistic opportunity to challenge Montoya for the title.

Rahal has shown considerable prowess on road courses this season, and with Mid-Ohio and Sonoma remaining, there is reason for optimism.

“A day like today when the car wouldn’t shift and we were down and out, but we were able to fight back shows what this team is made of” said Rahal. “I’m so proud of this Mi-Jack Steak ‘n Shake team to be second in the standings. We’re just going to keep our heads down and go forward.”

The 300 laps were completed with an average speed of 129.943mph. The were 14 lead changes amongst 10 drivers and the field was slowed six times for caution totaling 73 laps. Ryan Hunter-Reay’s margin of victory was 0.506 sec.

The Verizon IndyCar Series travels next to the Mid Ohio Sports Course for the Honda Indy 200 on Sunday August 2.