Welcome to Drafting The Circuits -
Home : Blogs : Anatomy of a Crisis: Indianapolis Qualifying 2015 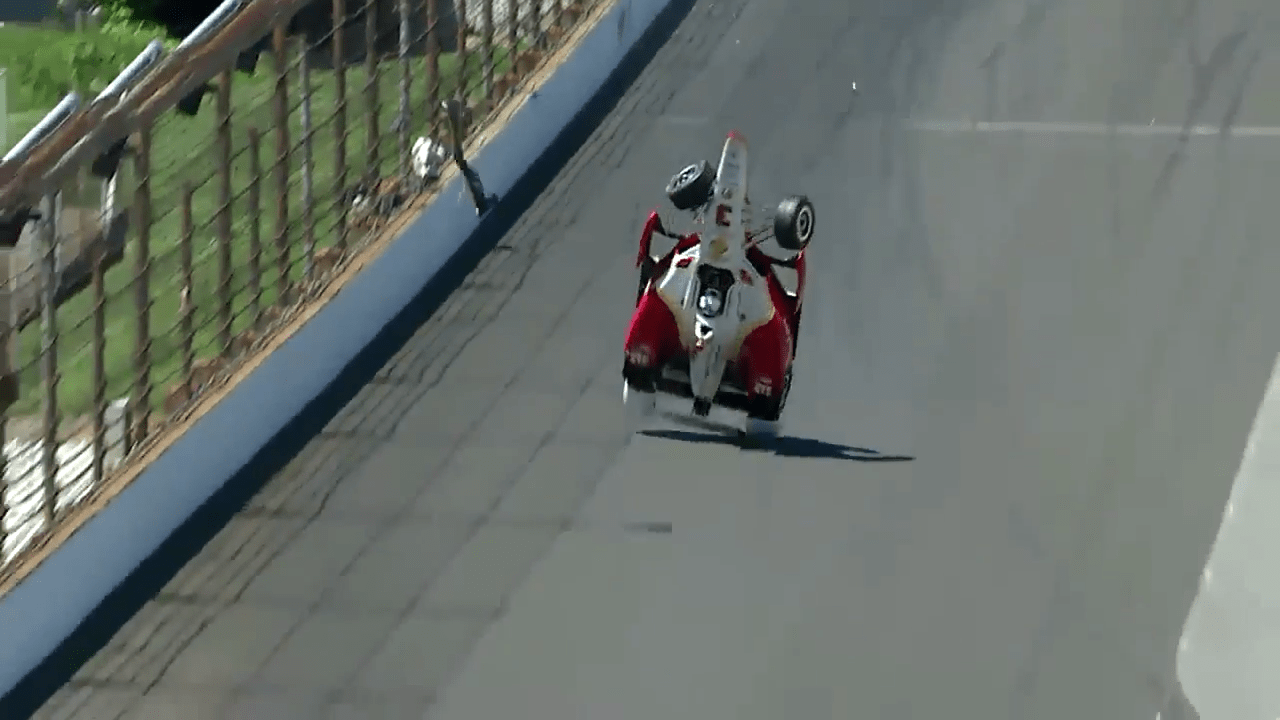 Anatomy of a Crisis: Indianapolis Qualifying 2015

At the risk of sounding like an old-timer that longs for the return of the ‘good old days’, I will tell you that some of my fondest childhood memories revolve around watching the high drama that once was Indianapolis 500 qualifying. There was so much that would happen over the two weekends of qualifying.

Drivers would make multiple attempts, sometimes forfeiting a solid run to take a crack at the pole. There were  last-minute deals that may see a bumped driver buy or borrow another team’s back-up car to make a last-ditch effort to bump back into the field.

Even the biggest stars of the sport had to make the field on speed with no guarantee. Indeed, I’ll never forget the heartbreak of Bobby Rahal getting shut out in 1993, or how the entire Penske team missed the field in 1995.

By comparison, Sunday’s qualifying session that was reduced to one run apiece for the drivers, and a bit of manufactured drama as Buddy Lazier attempted to bump his way in, was pretty mundane and a bit boring.

At the end of the day, we have 33 qualified cars led by Scott Dixon. The Ganassi driver set a four lap average of 226.760 mph early in the session, and watched as his time help up for the rest of the day. Dixon will lead off an all-Chevy front row joined by Penske drivers, Will Power and Simon Pagenaud.

While referring to Dixon’s pole speed as ‘slow’ may seem odd to the casual observer, it is a far cry from the 230 – 233 mph laps we saw in practice on Friday and Saturday. While many were thankful just to have the qualifying finally done with, it felt like a letdown.

Of course, that’s not exactly the way is was intended to go down. To really examine this saga, one has to go all the way back a few years when the aero-kit packages were first announced. Sure, hindsight is 20-20, but perhaps the timetable for their introduction and the relatively late delivery of the components to the teams in comparison with the on-track debut is the root cause here.

Now, I am no expert in aerodynamics, but my initial thought in viewing the super-speedway kits was that the Chevrolet didn’t have enough rear wing on their kit to keep the back of the car stable.

By contrast, the Honda variation seemed to have a lot more going on behind the rear tires compared with the minimalist approach from the Chevy camp.

Chevrolet’s explanation that the other components of their kits are producing enough downforce, therefore nullifying the need for a larger wing with end plates made sense to me.

The cars seemed to perform well in the open test and, at that time, there seemed to be no reason to believe otherwise. Throughout the first practice sessions, both manufacturers seemed to be fairly evenly matched when it came to lap times.

On Wednesday, Helio Castroneves, in a Penske-Chevrolet, lost the car in practice and it launched into the air, turning upside-down mid-flight, before landing on its wheels.

It was a frightening moment, but Castroneves came out unscathed. Like a true champion, he took to the track in his backup machine a few hours later. It may have been just a freak incident, but it raised the first eyebrows of concern.

Later in the day, the Dale Coyne-Honda car of Pippa Mann spun coming out of turn four. She hit the inside wall, before making hard contact with the attenuator at the entrance to pit lane.

The car spun several times before coming to a rest on the outside wall. Mann was shaken, but uninjured. While the situation of her crash was vastly different than that of Castroneves, it did not go without notice that all four tires stayed on the ground.

On Thursday, Chevrolet teams requested the removal of the centerline wicker bill on the nose of the cars, citing this as a possible cause of the Castroneves incident. IndyCar agreed, and made the component optional. They were removed from the Chevrolet cars, but Honda teams didn’t feel the need to make this change.

When Josef Newgarden slapped the wall late in the day, his CFHR-Chevrolet took to the air, landing on its roll hoop. The car slid down the track before grinding to a stop upside-down in the warm up lane.

The cause of the accident was later determined to be a tire going down, but the effect of hitting the wall was the same as Castroneves’.

It was beginning to be evident that IndyCar had a real problem on their hands as the practice speeds continued to increase. As is often the case in the information age, IndyCar and, to a lesser extent, Chevrolet began to take a beating on social media.

Comments ran the gamut from the articulate and well thought-out, to profane rants against the series with very little substance. However, there were two prevailing themes that kept popping up.

First, there was a genuine concern for the safety of the drivers. Thankfully, the three drivers that crashed were none the worse for wear, and indeed, the DW-12 tub held up well to the impact.

However, airborne cars can present a tremendous risk to competitors and fans alike, should one of them careen into the catch fence.

Secondly, was the notion that this is a Chevrolet problem that the Honda cars are immune to. Whether or not this is true is only speculation, unless we were to wreck a few more Honda cars.

By the end of the day, 1055 laps were run without incident. Six cars posted speeds in excess of 230 mph led by the Chevrolet machines of Simon Pagenaud and Scott Dixon. It seemed, at least for the moment, that everything was fine, setting the stage for Saturday’s first round of qualifying.

Saturday morning’s practice dawned with some incredible speeds. Helio Castroneves clicked off a barn burner of a lap at 233.474 with the aid of a tow.  In clean air, his Penske teammate, Will Power, set a lap in excess of 231 mph. The weather then played a factor as heavy rains fell over the speedway, pushing qualifying to Sunday.

With a revised qualifying schedule, Sunday began with an early morning practice session. Again, we saw several drivers top 230 mph with Scott Dixon nailing a lap at 233.001 mph. A little over 30 minutes into the session, we saw a third Chevrolet car take to the air.

This time it was Ed Carpenter, who exited his car unscathed, but visibly frustrated.  With an hour and a half before qualifying was set to begin, his primary car was now trashed, with precious little time to ready the back-up car.

Carpenter refused to put the blame on the Chevrolet aero-kit, instead blaming the hole in the floor mandated by IndyCar to reduce downforce.

This is when it really hit the fan. Despite modifications to the Chevrolet kit, there was another car upside-down on the track. At the eleventh hour, IndyCar decided that drastic action needed to be taken before any track activity would resume.

What followed was a series of closed-door meetings for several hours. While media and fans alike congregated outside the IndyCar HQ, precious little information was leaked.

Chevrolet and Honda team owners, engineers, and officials were seen coming and going, as speculation ran wild. Teams were scrambling in the garages creating a fever pitch of activity, while the faithful fans in the grandstands were left in the dark.

Many of the drivers were gracious enough to spend this time on Gasoline Alley, mingling with fans, signing autographs and making the best of the situation.

Twitter was actually the place to be if you wanted to find out anything, but again, it was all speculation, second-hand, and third-hand information. But it was something, as opposed to the deafening silence from the sanctioning body.

“Unbelievable,” “Ridiculous,” “Three-Ring Circus,” and “Amateur Hour” were some of the phrases used to describe the situation.

The prevailing feeling was that there was total disagreement between the Honda and Chevrolet camps as to how to proceed. And, indeed, Honda seemed to have every right to feel that their cars did not have a problem.

In the end, it was decided that the additional boost would be removed and the cars would have to qualify in race-day trim. These changes would apply to both manufacturers, which caused some to cry ‘foul’ on behalf of the Honda camp.

After two 30-minute practice sessions, qualifying would take place at 3:15 PM.  Each car would be allowed a single attempt. The fast-nine shootout was scrapped, but the back-row shootout would still take place, allowing for one entrant out of the 34 to be bumped. The decision was also made not to award championship points for qualifying.

“Just because we’ve seen three incidents happen with a Chevrolet, it doesn’t mean that there aren’t three more Hondas out there that are likely to happen or could happen.” said Walker. “I can assure you Honda does not believe that they have any issue, but then again, they will admit that right now we don’t have that answer.”

“When we’re talking about an event here, we’re talking about safety. It’s not about manufacturer one versus the other. It’s about how can we grab a hold of the situation and reduce the speed in the interest of safety, and safety has got to be our guiding light.”

“I think it would be at this stage fairly negligent on our part to just focus on one manufacturer and lay down restrictions for them. I think you have to accept the fact, just because we’ve had three incidents and they could be coincidentally involved with one manufacturer, it doesn’t necessarily follow that it’s only that manufacturer’s problem.”

Perhaps the largest benefactor of the hours-long meeting was Ed Carpenter, whose accident ignited Sunday’s controversy. In the interim, the CFHR Team was able to prepare Carpenter’s backup car in time to make the field.

When the cars finally took to the track for qualifying, with reduced boost and in race trim, the session went off without a hitch. The weather cooperated, and the field is now set for the 500.

Faced with a “damned it you do” and “damned if you don’t” scenario, IndyCar made the move that they felt would be in the best interest of the drivers, teams, and fans to move forward.

Whether it was the right or wrong course of action is irrelevant at this point, although I’m sure these points will be argued and contested hotly over the next few days.

Magnifying the fact that this is not entirely a Chevrolet problem, and perhaps vindicating IndyCar’s decision, SPM-Honda driver James Hinchcliffe had an accident in Monday morning’s practice that briefly overturned his car.

Hinchcliffe was transported to Methodist Hospital in Indianapolis where he is awake and alert, but there are no further details available as of this writing.

The 99th running of the Indianapolis 500 for the Verizon Indycar series will take place on Sunday, May 24th. Television coverage will be provided by ABC-TV beginning at 11:00 am EST.