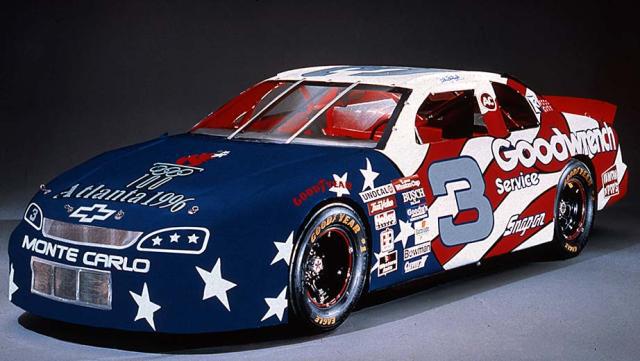 A Study in Red, White, and Blue: Patriotic Racing Liveries

As Americans, there are a number of forces that divide us. These may include political ideology, religious beliefs, social status, upbringing, geographic location, or our own opinions on pressing issues. However, many of us are united by national pride, and the belief that we live in the greatest nation on Earth.

The stars and stripes, and the display of the colors red, white, and blue, fill us with a sense of Patriotism, particularly around this time of year when we celebrate Independence Day.

With the Fourth of July right around the corner, lets take a look back at a few race cars that really put the spotlight on the red, white, and blue.

The Intimidator, Dale Earnhardt, celebrating the 1996 Olympic Games being held on U.S. soil.

Alexander Rossi, the only American driver participating in the 2015 U.S. Grand Prix at COTA

Alex Barron with Dan Gurney’s All American Racers in 1999

NASCAR Champ, Brad Keselowski, prefers the American flag to the checkered flag on his victory lap.

Indiana native, Conor Daly, proudly displayed the stars and stripes at Indianapolis in 2016

A true icon of 1960s-1970s American culture who was as patriotic as they come: Evel Knievel

With the U.S. Involved in the Gulf war, NASCAR honored the military at the 1991 Daytona 500.

The most-recent U.S.-based team to win in F1 was owned by Roger Penske

In 2000, Dale Jarrett won his second Daytona 500 with this all-American livery.

In 2014, NASCAR’s most popular driver took the National Guard colors to victory lane in Daytona.

With the distinction as the only American in F1, Michael Andretti added the flag to his helmet in 1993

Racing just eleven days after the events of 9/11, the NASCAR grid was full of patriotic liveries at Dover Downs in 2001.

In 2003, Jimmy Vasser proudly ran the American Spirit entry in the ChampCar Series

It doesn’t really matter what you drive,