Welcome to Drafting The Circuits -
Home : Blogs : 45 Years Ago: The Questor Grand Prix 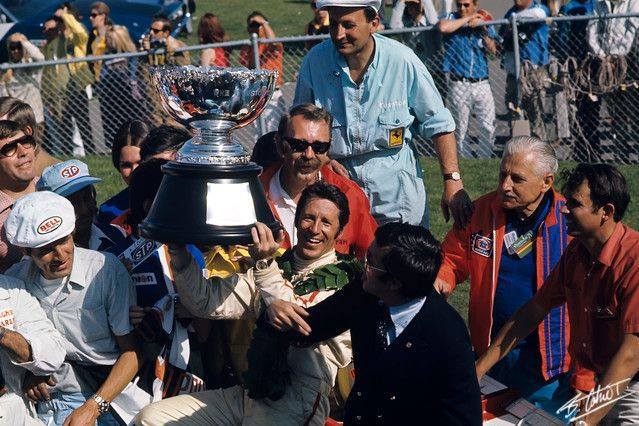 45 Years Ago: The Questor Grand Prix

Race fans are notorious for passionately arguing about “What if?” scenarios. One of the most common themes found involves pitting the drivers and cars of one series against a different series.

Comparisons between Formula One and Indianapolis style racing cars have been discussed for years, and the arguments have changed as the cars have have evolved in different directions.

The comparisons are largely theoretical, and either side can make a compelling case for their series. But, a head-to-head battle? Well, that’s never gonna happen this day and age.

Race fans in 1971, however, had the chance to see this exact scenario play out in a unique one-off event known as the Questor Grand Prix held at the now-defunct Ontario Motor Speedway.

The biggest stars of Formula One were invited to compete against some of the finest USAC Champ Car and Sports Car drivers that America had to offer.

The idea wasn’t entirely new, as USAC roadsters had shared the track with both Sports cars and Formula One machines at the 500 Miglia di Monza (500 Miles of Monza) from 1957-1958.

The Ontario Motor Speedway, sometimes known as ‘The Big O’, opened in 1970. During construction, the track owners and promoters had a vision that would see the sprawling state of the art complex host Indy Cars, NASCAR, NHRA Drag Racing and Formula One.

Constructed as a 2.5 mile oval, the track featured an infield road course that measured 3.2 miles incorporating the long front stretch and fourth turn of the oval. The 9 degree banked turn four became the first turn on the road circuit, which ran in the opposite direction.

With Watkins Glen drawing a tremendous crowd for the United States Grand Prix, Ontario Speedway management had high hopes of becoming the West-coast home for F1 in the States.

The Questor Grand Prix was not only a slick marketing tool, but it was essentially an audition for the track that was negotiating with the FIA for an actual points-paying Formula One event in 1972.

The idea of inviting USAC stars was in the spirit of gaining local interest, to hopefully fill the grandstands.

With a purse of nearly $279,000 (about 1.6 million in today’s money), the event attracted Ferrari, Lotus, BRM, Tyrrell, Williams, McLaren and Matra over from Europe.

In all, seventeen Formula One cars were entered, and the roster included the biggest names of the day. Jackie Stewart, Emerson Fittipaldi, Denny Hulme, Jacky Ickx, Graham Hill, Jo Siffert, Chris Amon and Ronnie Peterson were all on the entry sheets.

Representing the best of both worlds was Mario Andretti. The 1969 Indianapolis 500 winner was entered in a Formula One car for Ferrari, but he was a USAC champion, and a crowd favorite.

The American contingent were put into SCCA Formula 5000 cars. This was a curious decision. While the F5000 racers were similar to the F1 cars of the day, they were down quite a bit in the horsepower department.

While the USAC Indycars might have experienced a disadvantage on parts of the road course, they would have been able to make up ground, being well-suited for the long front stretch and the banking of the first turn.

This may have resulted in a more level playing field but, like they say, the world will never know…

The scheduling of the event with its late March date also proved to be problematic. F1 teams were traveling directly from the Trophy race at Brands Hatch, and USAC had a race scheduled at Phoenix the same weekend.

This resulted in the F1 teams arriving late, and many of the USAC entrants having to travel back and forth from Phoenix.

Because the F5000 machines carried much less fuel than their Grand Prix counterparts, the race format was divided into two 32 lap heat races. A mind-numbingly complicated points system based on aggregate times would be used to declare the overall winner.

Despite an aggressive marketing campaign, the event drew an estimated 55,000 fans; a far cry from the 178,000 that had packed the grandstands for the California 500 the previous fall.

Qualifying, predictably, was swept the by the F1 cars.1969 World Champion, Jackie Stewart, took the pole position in his Tyrrell. Chris Amon, in the Matra, started alongside in the front row.

Mark Donohue, in a Roger Penske-prepared Lola T192, was the highest placed F5000 car starting seventh on the grid.

Actor James Garner, who starred in the motion picture, Grand Prix, was tapped to drive the pace car, as the 30-car field set off for an Indianapolis-style rolling start.

When Garner peeled into the pits to let the cars loose, there was hesitation in the front of the field. Perhaps the European drivers were not properly instructed on this type of start. It appeared, if only for a moment, as if they were unsure whether or not the race had actually started.

Finally, Jacky Ickx mashed the gas, and flew around both Stewart and Amon into the first turn. Close behind were Denny Hulme and Graham Hill.

Behind them, Jo Siffert spun from sixth place, and the resulting evasive action from the cars behind him created a gap for the lead cars.

Farther back, Andretti had a great start from the 12th position, as did Donohue from 7th. The two battled one another to crack into the top five.

Stewart was able to finally muscle past Ickx, as a number of issues befell the field behind them.

Swede Savage made hard contact with the wall, the result of a sticking throttle. Savage was transported to the hospital and it would be five months before he would be cleared to race again

Ickx headed to the pits to change a rapidly deflating tire, promoting Amon to second. Behind him, Donohue and Andretti squabbled over third.

Andretti finally worked his way around Donohue. Third became second for Andretti when Amon also punctured a tire. He then sped off in pursuit of leader Jackie Stewart.

The crowd roared with excitement when Andretti caught and passed Stewart with just three laps remaining.

Andretti held on for the win followed by Stewart. Siffert took third, more than 45 seconds behind the leaders, as the cars made their way to the pit lane to prepare for Heat number 2.

With attrition having taken its toll, only 22 cars took the green for the second half of the event, gridded according to their finishing positions in the first Heat.

Now having figured out the rolling start, Jackie Stewart roared past Andretti, and began to pull out a sizeable lead. Behind them Ickx and Siffert battled for third, followed by Amon, Hulme, and Donohue, carrying the torch for the F5000 contingent.

Andretti struggled to get up to speed on cold tires, as Siffert and Ickx made contact with one another, spinning off-course. Donohue had managed to find his way around Hulme, now taking third place.

With a car that was incredibly loose on the banking, Stewart yielded to the faster Andretti, once again to the delight of the crowd.

Andretti’s Ferrari engine began to misfire in the late going, emitting plumes of smoke under deceleration. Andretti nursed it to the finish, taking the checkered flag 12 seconds ahead of Stewart who just managed to hold back a charging Chris Amon.

On virtue of finishing 1-2 in both heats, Andretti and Stewart were awarded first and second in the overall standings. Behind them, however, the odd scoring system produced some interesting results.

A 4th and a 5th gave Denny Hulme a 3rd overall, followed by Amon who found that a 6th and a 3rd equaled 4th. The highest place F5000 runner was Ron Grable, with a10th and 7th that gave him 7th overall.

While the Formula One cars were certainly the class of the field, the USAC representatives could also claim a win, seeing as Mario Andretti was one of their own.

In the end, the Questor Grand Prix was a one-off and remains an interesting curiosity in Motor Racing history.

The United States Grand Prix West became a reality when Chris Pook’s street circuit at Long Beach was added to the FIA calendar in 1976.