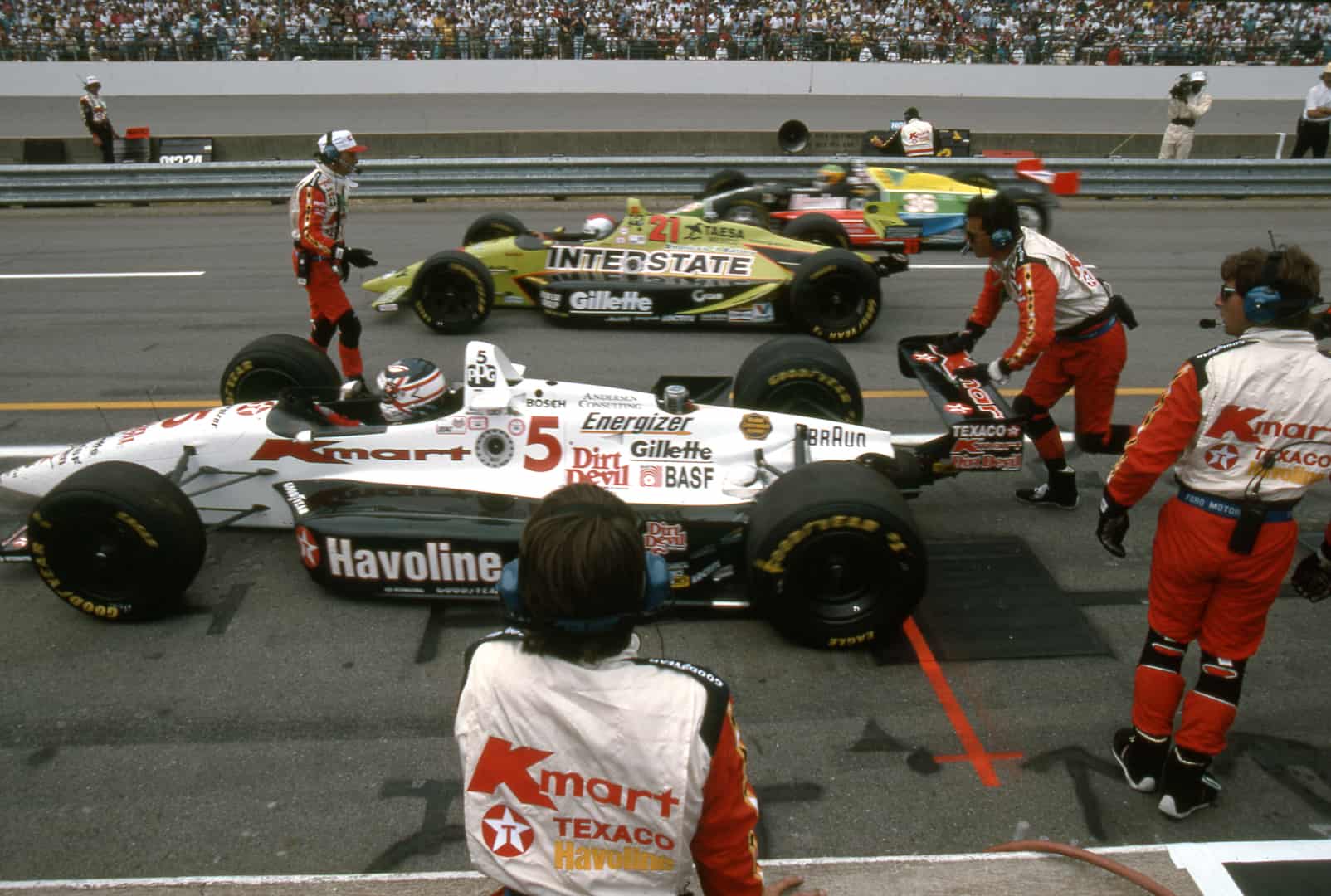 The early 1990s were a golden period for motor racing. In the United States, the PPG Indy Car World Series offered a strong racing platform and a diverse offering of race tracks that attracted former formula one drivers, featured second-generation champions and rising stars that competed alongside the old-guard superstars that were winding down their careers.

Over in Europe, Formula One’s post-turbo era featured some of the greatest all-time drivers with Alain Prost and Ayrton Senna trading barbs, as a young upstart named Michael Schumacher was beginning to make a name for himself.

The racing season that ran 25 years ago, in 1993, featured more compelling storylines than perhaps any racing season prior or since.

To truly understand the biggest story of 1993, one has to go a few years back. Nigel Mansell was an F1 driver of considerable talent who felt he should hold number one status in a team. After playing second-fiddle first to Keke Rosberg, and then Nelson Piquet, at Williams, he moved to Ferrari to much fanfare. After one season, he was joined on the team by three-time World Champion, Alain Prost. His ego apparently couldn’t handle being relegated to number two again, so he announced his retirement.

An offer from Frank Williams to return to that team with undisputed number one status changed Mansell’s mind. In 1992, Mansell drove a near-perfect season, taking the World Championship. While Mansell was expecting a large pay-raise, Frank Williams found that his car was so good that World Champion drivers (reportedly Ayrton Senna) were offering to drive it for free.

How much truth there was to that statement has been debated, but the truth is that Williams had already agreed to a contract with Alain Prost for 1993 months earlier, and kept the news from Mansell. A furious Mansell then did the unthinkable. He announced that he would not defend his F1 title, and instead, race in the PPG Indy Car World Series.

Mansell would find a prime seat in the series replacing 1991 champion Michael Andretti at Newman/Haas Racing. Andretti was making headlines of his own as he sought to follow in his father’s footsteps and bring a Formula One title back to the United States.

Andretti had signed with McLaren, one of the top teams in that era, partnered with Ayrton Senna for the 1993 season. The eyes of the American press kept close eyes on Andretti, as the world-wide press descended on the CART Series to chronicle Nigel Mansell’s debut season.

While F1 and CART were gearing up for their season, the Winston Cup drivers began racing in February. A young driver named Jeff Gordon immediately made headlines by becoming the first rookie to win a qualifying race at Daytona.

The 1993 Daytona 500 produced a fine battle for the win, and a seminal moment in television history. The late stages of the race produced a battle between Dale Earnhardt and Dale Jarrett, that those in the booth dubbed the ‘Dale and Dale Show.’

CBS announcer Ned Jarrett found himself in the position of calling a battle that involved his son. As the battle heated and the younger Jarrett executed a last lap pass on Earnhardt, father was openly cheering for son and became quite emotional in the booth when Dale Jarrett took the win.

It was a feel-good story to start off a season that would later be marred with tragedy. Ned Jarrett felt the need to apologize for his lack of objectivity in the booth, although it appeared that there wasn’t a soul who held anything against him. Even Dale Earnhardt told Jarrett, “I’m a father too, I understand.”

March saw the CART debut of Nigel Mansell as Michael Andretti started his first Grand Prix. The fortunes of the two men could not be more different. Mansell was immediately successful in CART, taking pole position and the win at the season opener at Surfer’s Paradise.

Andretti’s foray into Formula One looked like a failed experiment almost from the outset. New rules in place for 1993 did away with unrestricted laps during practice, severely limiting Andretti’s ability to learn race courses that he was unfamiliar with. On top of this, his reluctance to move to Europe, choosing to fly in from his Pennsylvania home, did not sit well with some and he never really bonded with the team.

Andretti’s first four Grands Prix ended in collision-related retirements. He finally was able to make the finish in Spain earning points for fifth-place, albeit a lap down to the leaders. Mediocre finishes and retirements continued throughout the season, as his teammate was posting wins.

At Monza, he took his first podium, finishing third, but it was evidently too little too late. He was replaced by Mika Häkkinen for the final three races of the season.

Recent conspiracy-theory claims by Andretti’s son, Marco, suggest that he was intentionally sabotaged by the team in order to put Häkkinen in the car at a lower salary. Whether or not there is any credence to this story is irrelevant at this point. In retrospect, Andretti’s F1 career was never meant to be. He returned to IndyCars, picking up where he left off, eventually becoming the winningest driver of the CART era. He now runs a successful multi-car team in the Verizon IndyCar Series.

After winning in Australia, Nigel Mansell’s oval-track baptism in Phoenix ended in a violent practice crash that put him out of the race. In the race, Mario Andretti found himself in the right time at the right place, taking victory and snapping a winless streak that dated back to 1988.

The elder Andretti, who was none to keen to have Mansell as a teammate in the first place, savored the win. The Phoenix victory meant that he could lay claim to winning races in four different decades, capping off a stellar career. The 25th anniversary of Andretti’s final IndyCar win will be celebrated this weekend as the Verizon IndyCar Series races at Phoenix.

On April 1st, the racing community was rocked with the news that the defending Winston Cup Champion, Alan Kulwicki, was killed in a plane crash en route to Bristol, TN. Kulwicki, a native of Wisconsin, broke the mold of the typical NASCAR driver, as the holder of an mechanical engineering degree.

Despite his driving skills being sought after by top teams, he preferred to continue as an owner/driver, calling his own shots. His efforts were rewarded with the Winston Cup in 1992, honored at the season-ending banquet with Frank Sinatra’s “I Did it My Way” playing to the room.

When Rusty Wallace took the win at Bristol that weekend, he spun the car around, taking his victory lap in reverse, imitating Kulwicki’s signature “Polish Victory Lap.”

The NASCAR community had barely had time to grieve Kulwicki’s loss when Davey Allison was killed in a helicopter crash at the Talladega Superspeedway in July.

Allison, a second generation driver, was one of the rising stars of the sport having collected 19 wins in his brief career. The loss was especially devastating for the Allison family, as younger brother, Clifford, had perished in a racing accident just eleven months prior.

The remainder of the season saw several tributes to the two fallen drivers culminating in a side-by side Polish Victory lap at the season finale by race winner Rusty Wallace, and season champion Dale Earnhardt, with each displaying flags representing Kulwicki and Allison.

In May, the Indianapolis Motor Speedway was overrun with international press to cover Nigel Mansell’s first crack at the Greatest Spectacle in Racing. With Mansell joining Mario Andretti, Emerson Fittipaldi and Nelson Piquet in the field, the 500 would feature four Formula One Champions.

Also entered in the race was four-time 500 winner, A.J. Foyt, who had practiced at speeds of 221+ prior to qualifying. Foyt had hinted at retirement in 1991, but came back in 1992. On pole day in 1993, Foyt’s driver, Robby Gordon, crashed during his attempt. Something at that moment clicked with A.J. and he decided it was time to walk away.

“Believe me, it wasn’t a planned deal,” said Foyt. “All my life, I’ve done things on the spur of the moment, so this was the real A.J.”

A hastily-planned ceremonial final lap saw A.J. Foyt circle the Speedway in his No. 14 car to a standing ovation as there was hardly a dry eye in the stands.

Bobby Rahal, who had won the 1992 CART title as a driver-owner, was developing his own chassis, the Rahal-Hogan 001. Rahal had driven the car to second place at Long Beach, and had high hopes for the car at Indianapolis. In the end, the speed just wasn’t there. Despite a last ditch effort to bump his way into the field with a car loaned to him by Roger Penske, Rahal found himself coming up short, and missing the field.

Mansell, for his part, qualified a respectable eighth, and provided some excitement during the race, leading 34 laps and finding himself in contention for the win with less than 20 laps to go. However, his inexperience with oval-track restarts shuffled him back to third when the green flag flew on lap 184, as two former 500 winners, Emerson Fittipaldi and Arie Luyendyk, roared around him.

Fittipaldi held on for the win, his second in five years. However, in victory lane, he made a decision that haunts him to this day. When presented with the traditional milk, he pushed it away. One of his handlers had a glass bottle filled with orange juice ready for Fittipaldi.

While promoting the Brazilian citrus industry may have seemed like a good idea to him in concept, he seriously underestimated the backlash from Indy 500 purists who found this to be a slap in the face of tradition.

He was unceremoniously booed at Milwaukee one week later, and found similar receptions over the course of the season. To this day, discussions of Fittipaldi, despite his phenomenal racing record, circle back to the orange juice incident at the Speedway.

In Europe, the Williams ride that Mansell had vacated proved to be every bit as spectacular as promised. Alain Prost, and new teammate Damon Hill, combined for ten Grand Prix wins as Prost cruised on to his fourth World Driver’s Championship. Along the way, Prost recorded his 50th Formula One win, a feat that was unprecedented at that time.

Prost’s former teammate and long-time rival, Ayrton Senna, put up a fight in the same McLaren that Michael Andretti could not come to grips with, taking five wins over the season. Senna had also coveted the Williams ride, but a clause in Prost’s contract expressly forbid the team from signing Senna as his teammate.

Senna publicly called Prost a coward for not racing him in equal equipment as the on-track rivalry continued. Senna was working on a deal to put himself in the Williams ride for 1994, banking on the fact that Prost would retire. At Prost’s final career Grand Prix in Australia, Senna embraced him on the podium.

Sadly, Senna would die in a crash the following spring at Imola in the Williams car. Not only did 1993 produce the final win for Mario Andretti, but also the last wins for both Prost and Senna, two behemoths of the sport.

Back in America, Nigel Mansell had learned his lesson the hard way at Indy and defied conventional wisdom by becoming an oval-master. He won at Milwaukee the following week, and proceeded to win all of the remaining oval races on the schedule. Wins at Michigan, New Hampshire and Nazareth propelled him to the CART series championship, beating out Emerson Fittipaldi and Paul Tracy.

In the 25 years since that seminal 1993 racing season, all three major series have experienced peaks and valleys and seen major changes, both good and bad. It is difficult to predict what the next 25 years of motor racing will bring, but it’s fun to be along for the ride.