17-Race Schedule Announced for IndyCar in 2022

INDYCAR has announced a 17-race schedule for the 2022 NTT INDYCAR SERIES season, which will feature its bold and daring athletes competing against the thrilling backdrop of unprecedented coverage on network television, an earlier start date, a re-energized summer of fan favorites and a turbocharged stretch run.

In the United States, a record 14 events will air on the NBC broadcast network, one more than previously announced in July. It is the most single-season appearances on network television in INDYCAR SERIES history. Two additional races will appear on USA Network while Peacock Premium, NBCUniversal’s streaming service, will provide live coverage of all 17 races in addition to practices and qualifying.

“This schedule continues to build on the growth and momentum the NTT INDYCAR SERIES has achieved, especially in 2021,” Penske Entertainment Corp. President and CEO Mark Miles said. “Our terrific partnership with NBC Sports has led to a fantastic opportunity to place an unparalleled 14 events on broadcast television while completing the rest of the schedule with USA Network and Peacock.

“Our drivers and teams will give the fans a strong, earlier start with six consecutive races on NBC, building even more anticipation for the crown jewel of the Indianapolis 500 in May. Our summer schedule also is full of action, with no extended breaks in the calendar, leading into the crowning of a champion on the West Coast with our last two races also on NBC.”

“We’re incredibly excited about our 2022 NTT INDYCAR SERIES schedule, highlighted by the 106th Running of the Indianapolis 500 and a record 14 INDYCAR races on the NBC broadcast network that will bring added exposure to the series,” said Mike Perman, VP, Programming, NBC Sports. “With more races than ever on NBC, plus comprehensive live coverage of every minute of the 2022 season on Peacock with practices, qualifying and race simulstreams, we look forward to continuing to grow the sport and super-serve INDYCAR fans across the country.”

NBC will feature the first six races of 2022, as fans won’t have to wait long for INDYCAR action following the 2021 season finale. The NTT INDYCAR SERIES championship will begin at the Firestone Grand Prix of St. Petersburg, which will host the series’ season opener for the 11th time, Sunday, Feb. 27. It is the first February start for the INDYCAR SERIES since 2004 and the earliest the season has started since the opener on the Streets of St. Petersburg on Feb. 23, 2003.

The action-packed oval at Texas Motor Speedway moves to March for the first time, Sunday, March 20. It is the second consecutive year that the series will race at the “Great American Speedway” ahead of the Indianapolis 500, placing a crucial oval on the early part of the schedule.

The Acura Grand Prix of Long Beach returns to the spring calendar, Sunday, April 10, appearing on network television for the first time in 15 years. It is the 38th year the INDYCAR SERIES has raced on the iconic streets of Southern California as the event celebrates its 47th edition.

Barber Motorsports Park hosts its 12th Honda Indy Grand Prix of Alabama, Sunday, May 1. Then, the series moves into the traditional Month of May at Indianapolis Motor Speedway with a series of events featured on NBC: the GMR Grand Prix on Saturday, May 14; Crown Royal Armed Forces Qualifying weekend, Saturday and Sunday, May 21-22; before the 106th Indianapolis 500 on Sunday, May 29.

Over half of the events on the NTT INDYCAR SERIES schedule have been on the calendar for 19 or more years. Mid-Ohio joins Long Beach in longevity as it hosts the series for a 38th year in 2022.

The 2022 NTT INDYCAR SERIES championship will finish with a flurry of eight races in the final nine weeks of the season, with six events on NBC.

This jam-packed second half of the season starts with the long-awaited return to the Streets of Toronto on Sunday, July 17, for the series’ 36th Honda Indy Toronto. The season continues with a high-speed oval doubleheader Saturday and Sunday, July 23-24 at Iowa Speedway. With partnership from Hy-Vee, it will mark the 16th and 17th INDYCAR SERIES events at the track known as “The Fastest Short Track on the Planet.”

“Iowa Speedway has traditionally produced some of most intense racing the NTT INDYCAR SERIES has to offer,” INDYCAR President Jay Frye said. “It is great to see that this short oval, where we’ve seen up to 955 on-track passes in a single race, is back on the schedule. Combined with the rest of the calendar and a growing paddock, which has produced as many as 28 entries at non-Indy 500 events this year, the 2022 season will be as compelling and competitive as ever.”

Another historic NASCAR-INDYCAR Brickyard weekend at Indianapolis Motor Speedway will see the NTT INDYCAR SERIES featured Saturday, July 30 followed by another wildly popular visit to the Streets of Nashville on Sunday, Aug. 7. In 2021, the inaugural Big Machine Music City Grand Prix played to packed grandstands and drew the largest cable television audience for the NTT INDYCAR SERIES in over two decades. 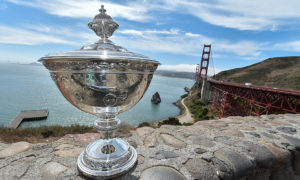 The series’ final oval of 2022 will come Saturday, Aug. 20 at World Wide Technology Raceway before back-to-back races on the classic American road courses of Portland International Raceway and WeatherTech Raceway Laguna Seca to finish the season. The 28th Grand Prix of Portland is scheduled for Sunday, Sept. 4 while the 25th Firestone Grand Prix of Monterey returns to crown the 2022 NTT INDYCAR SERIES champion, Sunday, Sept. 11.

“This is an excellent schedule for the 2022 NTT INDYCAR SERIES championship,” Miles said. “This calendar provides a level of balance between temporary street circuits, road courses and ovals, and that variety and required versatility from our drivers are important, distinguishing attributes of NTT INDYCAR SERIES racing.

“The continuity among our events and the growth in the number of teams showcase our strong positioning and continued momentum.” 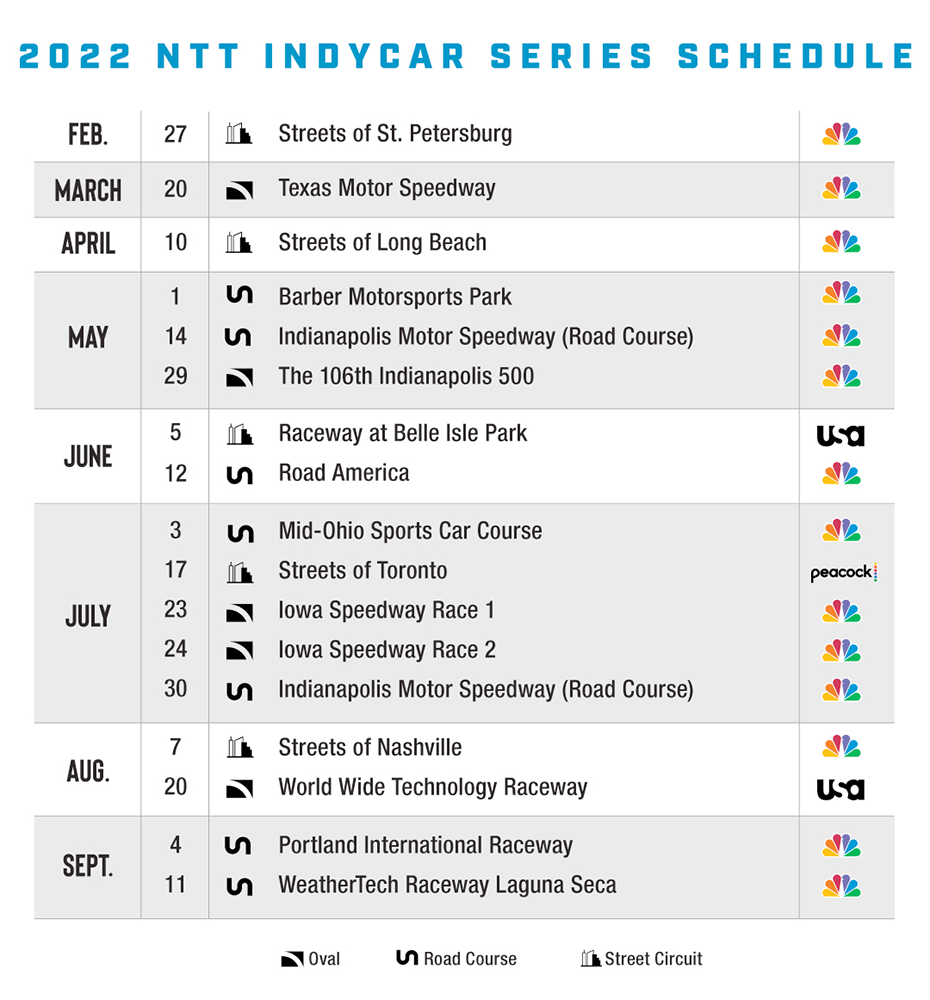